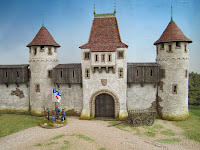 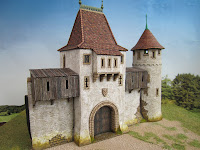 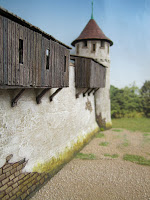 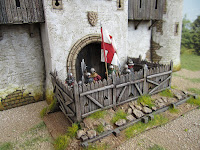 The gate and walls of Verneuil are based on castings from Hudson and Allen, which have been expertly modified and painted for me by John Boadle. These are an attempt to reflect how a typical fifteenth century town or castle walls would have appeared, based on contemporary illustrations. They consist of four pieces from H&A's castle set; the gate and three wall sections (one of which is breached and not shown here), all of which have undergone major rebuild or substantial modifications by John. All the walls have been rendered over the cast stonework, to represent a limewash covering.

The gate has undergone most significant changes. The tower has been raised in height with an enclosed roof added, as wll as a breteche, loopholes and shutters and on the interanl-facing side two high gothic windows. A wooden boulevard (as a seperate piece) reinforces the gate, as would have been common practice when a siege or attack was threatened. To the rear of the gateway the original stone stable building has been removed and replaced with a half-timbered guardhouse. The wooden pallisades, along the tops of the walls all have removeable roofs to place in figures.

The intact wall section has a wider parapet, where a gun loop has been added between the pallisaded sections. I've added a gun from the Kingmaker Hussite wagon with a gunner and spotter ("I don't know where the English are, but I do have a hunch!").

The other wall section has full pallisading and a damaged tower, which John has embellished with additional fallen masonry and wood. I'm not using the breached setcion at Salute as it appears that verneuil walls were intact on 17 August 1424; the castle has been retaken by the French using stealth, apparently a result of Scottish troops convincing the garrison they were English and so being let in (!!).

My contribution has been limited to painting the two tower roofs (to which are added spare poles from some 'Baueda' tents) and trying to match John's painting. I'm thrilled by the quality of John's work on these pieces; he's also added many small improvments (such as windows etc) which all add to making these both highly detailed and very convincing and has turned my scratchy drawings and aspirations into reality. They will see much use as town walls in many scenarios to come (as illustrated by the Burgundian garrison circa 1475, assembled on the walls).

For the Salute game, I'm hoping to quickly paint a couple of buildings to go inside, if time permits. 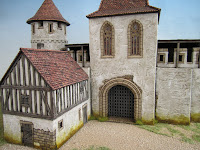 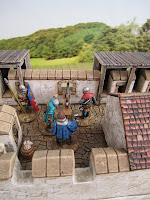 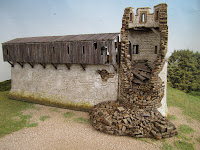 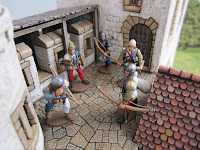 looks fantastic!!!
Great mods and well worth the effort

What a wonderful castle !!!

I hop you'll take a lot of pictures of your table at Salute !:)

Absolutely gorgeous! Very convincing piece of terrain with a lot of awesome detailing. I really do envy you. :-)

WoW and I mean WoW! That's one superb terrain piece and I'm green with envy!

I particularly like the archers you have painted up for this aswell.

Excellent,those going to Salute are in for a treat!

That is a stupendous peice, and well worthy of your painting. The hordings and other additions really add to the already great peice.

Really REALLY spiffingly nice. This is top notch terrain and I am envious.

Excellent work, I shall be sure to mark you up on my Salute floor plan. Even in what is basically one immense room, it is amazing what you can miss.

That is one of the best pieces of (lovingly worked and designed) terrain I've ever seen!

Fabulous work. Shame to miss it all at Salute. Where else to you plan to run the demo?

It looks utterly fantastic. What a marvellous job you and Mr Boadle have done.

The best I´ve seen in a lot

Amazing work from John!!!
Looking forward to seeing this one!

I am left speechless...
I live in fifteenth century!
These things(walls) do really exist. They are not terrain pieces!!!
T.