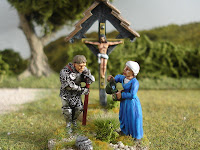 Just a quick post, with a vignette that I did a few weeks ago. A man at arms, usable for any army, taking on fluids (probably wine not water) after the battle. The camp follower is a Foundry figure from their Swiss wars range. The useful wayside cross in the background is Bicorne from their ECW range (I think). More anon.
Posted by painterman at 11:04 5 comments: 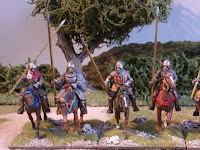 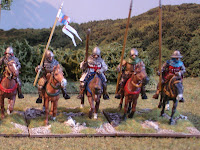 Four bases of English 'scurrors' painted allegro, using the Army Painter dip. Having read avidly Dave Imrie's Saxon Dog blog over the last few weeks and having been impressed by the quantity and quality he's acheived by brushing on the dip, I thought I'd succumb and give it a go in the hope of increasing production levels, without compromising too much on detail. Also these figures are not 'core' to the English army and may see action on the table only on rare occassions, so I felt I had little to lose.
I'm pretty pleased with the results. I undercoated the figures with a light grey enamel and then just blocked in the colours, using much paler tones that I would normally use - all those Foundry highlight shades look like they may get used after all. This approach felt very odd and distinctly uncomfortable having painted figures with a shade and highlight style for more than 30 years. However just when I was thinking it may have been a bad idea, came the 'eureka' moment when the dip is applied (by brush) and all the figure's details are picked out and some decent shading applied. When dry I then picked out some highlights, with the same colour as the base, on some cloths and on the faces. I chose the 'Dark Tone' dip, on the basis that it would have greater impact on the plate and mail armour. The dip finish is gloss, so figures were matted down with a spray of 'Coat d'arms' matt varnish.
Horses were traditionally done but I will test dip on some soon.
Overall results are a 7/10 for quality (but only if you study the figures close up) and a 11/10 on time saved - doing these 'nomally' would have taken me probably 3 times longer.
Figures are Perry and pennon from LBMS banner sheet. Basework to be completed and photo'd in artifical light - not great pics I'm afraid.