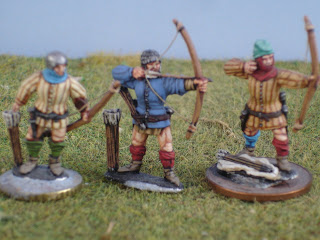 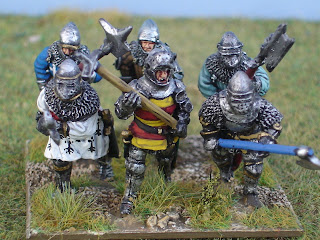 So I thought I'd have a go at joining the digital age and give the world the insight into my current wargaming project. I also hope that blogging will provide me with the motivation to maintain some momentum with my painting and collecting, perhaps driven by a feeling of guilt if I fail to post with some regularity. We shall see how this all pans out over the next weeks and months.

So what's the project? Well, to create two modest sized medieval wargame armies , covering the Hundred Years War - specifically the Agincourt to Orleans period of 1415 to 1430. The scale will be 28mm and the prime motivation for this, as I'm sure it is for many of us, is a range of model figures - the Perry Miniatures 'Agincourt to Orleans' range designed by Alan Perry. Another appeal are the beautiful flags and pavise transfers from Little Big Man and GMB. Also the medieval period is a favourite of mine, particularly the fifteenth century; having a Burgundian Ordonnance and a part-completed Swiss Confederation armies. They always have high visual appeal with the heraldry, but this comes with the challenge on time and painting skills to deliver convincing looking rampant lions, Fleur de Lys, etc.
I intend to narrow the armies historic context to the 1420s-30s period; the post-Henry V period, when the English, led by the dead King's brothers attempted to sustain the military and political momentum achieved by the Agincourt victory to extend English dominance in northern France against the weak French, exploiting an alliance with the Duke of Burgundy. This period includes the battles of Bauge, Cravant, Rouvray (the Herrings) and Patay, as well as numerous sieges of walled towns and castles, culminating at Orleans and French resurgence of morale following the rise of Jean of Arc. As I say, armies will be modest in size - partly reflecting the small size of the historic armies and because I need to be realistic on how much painting and modelling spare time I have (plus this is not the only wargaming project I have on the go - more on that anon perhaps).

So, there will be an Anglo-Burgundian army and a (larger) French army, with Scots allies.

My current plan is to create figures on bases that will be 'rules agnostic'. At this stage I have no preference on what rule I will one day use. As my prime interest is in the painting and collecting - rather than the gaming - I intend to base all figures on 50mm square bases, already purchased from Litko, and to work up relevant groups of figures, using badges, flags and heraldry to denote the various armies. I'd rather work up interesting bases of figures, that broadly reflect the type of fighting man, than be constrained by specific numbers of figures on specific base sizes.

As a taster to initiate the blog, here are some WIP pics.
Posted by painterman at 13:01 No comments: