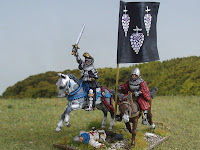 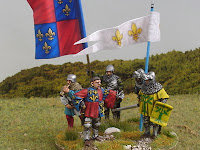 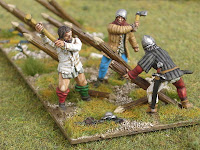 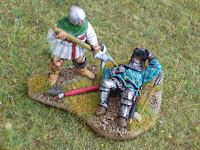 One of the great attractions (and distractions!) to building any army is the creation of the non-standard troops; those command stands, personalities, casualty markers and general hangers-on. These are the first I've completed so far.

So above are; Etienne de Vignolles, nicknames 'la hire' (due to his alleged temper and hatred for the English). La Hire was a captain at the battle of Bauge in 1421 and a prominent leader of the French reassurgence at the seige of Orleans and the battles of Jargeau, Beaugency and Patay in 1429. He died 1443. His flag is very distinctive, bearing bunches of grapes. Its a Freezywater one, which I plan to 'upgrade' to GMB when one's available.
Next, the duke of Alencon command group. The Alencon family were a leading French noble family in the fifteenth century; Jean was killed at Agincourt and his sceond son (also Jean) was a leader in Joan of Arc's armies at Jargeau and Patay. He died 1476. Here he discusses the finer points of the French battle plan with Jean d'Aulon, who was squire to Joan and later a chamberlain to Charles VII of France. He died 1458. The flag bearing his armsis GMB and his personal banner by LBMS.
The bowmen are from the Perry pack of 'longowmen preparing', which i think best captures this period and which I hope will be extended at some point, not too distant. Not really a combative group; as this is definetly a 'before' not during battle activity.
Finally a vignette showing what war for many professional soldiers of the medieval period was all about (besides looting) - the opportunity to capture a high-ranking nobleman in order to share in the potentially lucrative ransom paid by his family for his release. According to Anne Curry in 'Agincourt', despite the high numbers of French prisoners killed on Henry V's orders during the battle, many Englishmen still secured ransoms for captured nobles taken back to England, in the following years.
These are last posts for few weeks as I'll be on summer hols in France - but am hoping to snaffle away some crossbowmen to do between dips in the pool and glasses of local vin.
Posted by painterman at 13:53 5 comments: