Finally I have an opportunity to breath a little life into this blog - apologies for a lack of posts, but I've not added anything new to my HYW armies recently as I've been focussing on other armies. However there will be future postings as I intend to refight more battles next year. In the meantime, I have had some spare time to paint up Hudson and Allen buildings which I've had lingering. 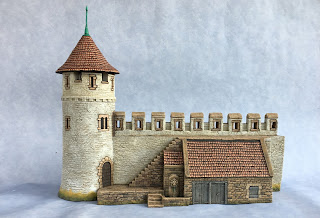 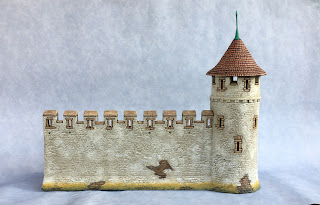 One is an extra section of castle wall, to add to those which John Boadle converted and painted for me several years ago. Most of the walls that I have shown some degree of damage from siege activity and I wanted another which was intact. No conversion work on this one, just cutting out the crenallations and adding a wash and skimming of plaster to the walls followed by the biggest challenge of matching John's paintwork. I can confirm that painting individual tiles in three shades is more than a little tedious(!), but I'm happy with the final results when they're lined up together. 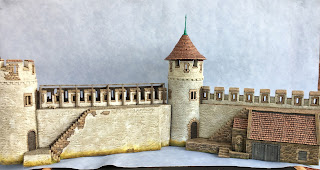 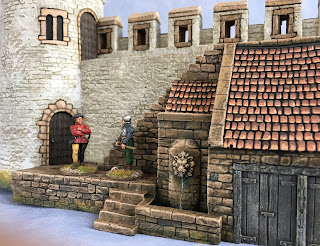 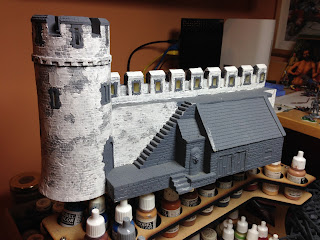 The barn is also a Hudson and Allen casting; I love the fine detail on these models which really is evident once you start adding washes and dry-brushing. I cut away most of the larger surrounding base of the model, to get a smaller footprint, and glued it to a thin plasticard base. It was then a case of simply painting to match other buildings I have (the rendered walls are a little less yellow that on these photos). I will add some farmyard clutter when I can locate the castings I have squirrelled away! 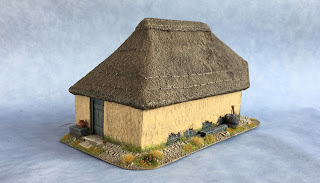 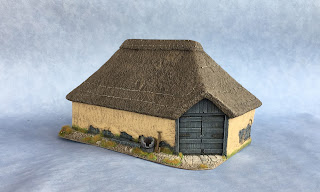