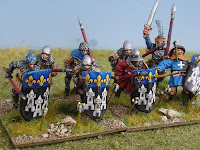 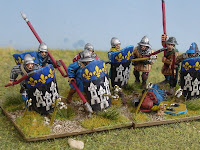 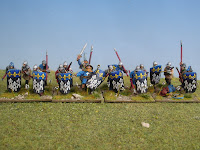 Just managed to miss an April update I'm afraid...but progress has been made.
Oh er, it's ... another French urban paviser unit; this time advancing into English arrows. This unit represents Rouen, the largest town in medieval Normandy, using more of the excellent LBMS pavise transfers.
Although this is the third urban milita (one to go) it was actually the first one I started and has been on and off the workbench for many months now, for some reason I really struggled getting it done and changed the composition many times - the 'rejected' figures are now destined for the last milita.
The arrows are my own castings, nicely made for me by Pete at themouldmaker.com which seems the only way I can to get hold of suffiicient volumes to allow me to place them in most of the French bases (and have some for other future and past Ancient & Medieval projects). The limitations have been my own sculpting abilities, the originals were metal rod with fletchings made from green stuff and Magic Sculpt. The feathers maybe just a tad oversized, but they are good enough for me for what I want to use them for - will post up some sprues of them for closer inspection.
In the interim between militias, I've been gradually adding French Men at Arms and I've just received some pro-painted English longbowmen, ready for basing - more anon.
Posted by painterman at 08:34 2 comments: