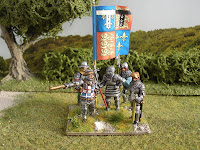 John duke of Bedford was Henry V's oldest surviving brother, following the deaths of the King and the duke of Clarence. In Henry VI's minority Bedford became Regent of France and as such led the war effort and secured the significant victory at Verneuil in 1424.
The chronicler Jehan de Waurin, one of the key sources for the wars, was in attendance with the English army that year and describes Bedford when the English army besiged the town of Ivry in August. He wore a specially made surcoat, bearing the combined red cross of England and the white cross of France, signifying to all in attendance and behind the walls of the town, his legitimacy as Regent of the two countries, now legally combined following the Treaty of Troyes.
I'm assuming that he continued to wear this for the remainder of that year (at least) and so have made some marginal modifications to one of the Perry commanders to re-create Bedford. I decided to put the French cross on blue (although many contemproary illustrations show it on red) to create some contrast. The figure in the middle of the base is a lovely figure sculpted by the 'count of wymborn' on Steve Dean's website; others are Perrys.
Posted by painterman at 07:45 3 comments: 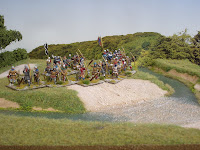 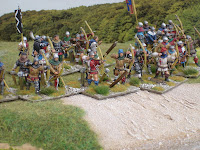 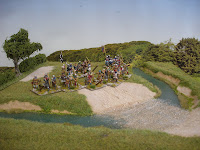 A small contingent of English longbowmen defend the crossing point of a tributary of the Seine, somewhere in Normandy.
The remainder of the English longbowmen for now; another 9 bases completed here. I'd like to do another three to take the total to 18 and so retain the 3:1 ratio with the men-at-arms. Figures painted by me and Jim Bowen on a roughly 50-50 split. Couple of older Citadels tucked in amongst the ranks including two plastics (before the current plastic 'renaissance'). The commander figure is Sir John Harrington (whose 19th century descendant appears to have invented the water closet!) who I've used as I had the GMB flag! Another St George flag is to be added to these for completeness. The terrain board is made by Keith at Realistic Modelling Services, who has a top-notch product.
Bases with defensive stakes are still to be completed.
Posted by painterman at 15:47 4 comments: 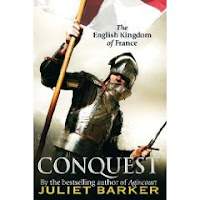 Those nice people at Amazon have sent me some reading matter - Conquest - the new book on the conquest and loss of English Normandy, from 1417 to 1453. The last blog-related book I read was Anne Curry's Agincourt which was an academic study, well researched and suggesting new insights into the armies, campaign and battle. I'm expecting Juliet Barker's approach to be much 'lighter', indeed the preface is ended with her stating "I hope that the reader will be entertained as well as informed". It looks like Barker's taken a straight narrative approach, using only secondary sources, but hopefully one that's anchored to the existing historical evidence. I've had a quick look at the section covering the battle of Verneuil, where she's taken the established view of the battle - sadly making no reference to Dr Michael Jones recent published reinterpretation. However the read should keep me sufficiently enthused for the next 6 weeks, to keep my project moving, although time spent reading is not time spent painting! I'll post a brief review of the book when read.
Posted by painterman at 11:22 3 comments: