The 595th anniversary of the battle of Agincourt would seem to be sufficient excuse to post some pictures of my English army in it's current near-completed state. The photos were taken in a bit of a rush and had to be done indoors, so never as good with flash as with natural light.

As readers of previous posts will know, nearly all the figures are Perrys AO range, with some Citadel older Brettonian range sneeked in for added variety of poses. When I've lined the figures up like this on my table, for the first time, they don't seem to be as numerous as I'd thought (although I'm more than happy with the quality). If I manage to create a little more spare time, I'm minded to add a couple more men-at-arms bases, using up odd figures that I still have, probably as generic ones that I can use as Norman-raised troops (ie unspecific to any English nobleman). I'm also planning to add some archers on skirmish-type bases, as well as command vignettes, baggage and casualties before this army will be deemed as in a state of completion.

I've just received some of the newly released GMB flags for my French, so this should allow me to start basing up some more already painted troops. 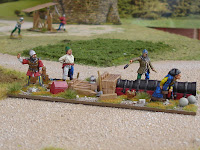 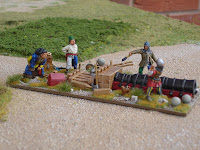 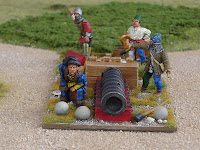 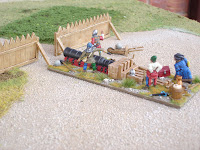 A bombard for use with either the English or French armies. Although it's probable that bombards of these huge proportions were not produced until the mid fifteenth century, much of the campaigns for Normandy in the secound quarter of the century were characterised by castles, strongholds and towns falling to either the actual, or the percieved, threat from besiegers who arrived accompanied with a siege train of artillery pieces. I have another smaller bombard casting, the old Citadel one, which I'll paint up and which will be more appropriate for this period.
This is the Perry WotR castings with three of the crew on 'sabot' bases (5 pence coins), so that it can be used by my Burgundians too. Crew are an old Citadel Brettonian, Perry handgunner and the master gunner from the sadly defunct Empire Miniatures of Australia - I've been saving him for an appropriate opportunity and I think this is it, as he fits well into this semi-vignette. The equipment items are from various manufacturers, inc Bicorne, Front rank and Architects of War. The wooden pallisades are Kingmaker Hussite wagons sides, with wooden framework added. The colour tone for the new-cut wood is Foundry Canvas Shade (8A), highligthed with a drybrush and then dipped with Army Paint strong tone, then finished with a matt Dullcote varnish. Thanks to phil Hendry for suggesting this colour - I'll be using it again.
If you want to see the Burgundian version, with mantlet, it's here on my other blog http://je-lay-emprins.blogspot.com/
So -there you have it... two bombard bangs for your buck!!
Posted by painterman at 08:20 2 comments: