To be clear at the start, I am at heart a medievalist when it comes to painting, collecting and (occasionally) gaming. All this stems from a long-held interest in medieval history, which I carried on to degree level, but which failed to turn into a related job. For me, very little matches the aesthetic appeal of a well painted medieval army, with full panoply of heraldry, flags and armour. Although the popular view is that the medieval period lacked colour, it’s probably not the case when you look closely at the evidence. Military matters apart, everyday life was full of colour; parish church walls, rood screens and ceilings were all decorated with brightly painted patterns (some of which survives, such as Pickering in Yorkshire) and, icons and saints although carved of wood or alabaster were painted in life-like colours. Also dyes for clothing was not restricted to dull, earthy browns and greys; just look at Flemish paintings of the time.
However, in wargaming terms the collation of an accurate army comes at a terrible cost – time.
For the poor collector must have the greatest challenge and the longest task ahead of him (or her) of all the periods that can be chosen. The nub is that no two figures are the same.. there is no degree of any uniformity that for instance a collector of armies from the 17th century or even state-organised ancient armies, such as Greeks and Romans, would recognise. Now I’ve collected non-medieval forces too, having both AWI and WW2 collections, and I appreciate that there are at times tedium in painting uniformed figures…another 20 black tricorns or another 40 rifle butt highlights, but at least it’s all relatively quick. It’s only mixing one colour and it allows you to ‘production line’ the process and see a unit build up in front of you, allowing you to add in any personalisation and minor differences at the right stage. For the poor medievalist though, the best you may look forward to as a speedy process maybe limited to a dozen spear shafts or some plate armour.
Now, it’s not all doom and gloom of course, surely this proverbial glass is half full and not half empty? We have benefited, perhaps on a par with Ancient gamers from the ‘great leap forward’ that’s occurred in the last few years - high quality transfers and flag printing. We should offer our deep thanks and open our wallets readily to the likes of LBMS, VVV, GMB and Freezywater (among others) who have transformed the appearance of finished figures. Banished are the days when a medieval (or ancient) army only looked good when viewed through a squint and at ten feet distance. There is no way that I would contemplate the task of painting twenty pavises, bearing the complex arms of late medieval towns, if I had to paint them all - firstly due to time taken, but mainly as the chance of getting any degree of a consistent finish was minimal. At best, heraldry used to end up being simplified from the actual designs, in order to achieve something that prevented you going either blind or half-crazy with frustration of re-painting numerous errors in the fine detail.
However, the essential challenge remains. Medieval soldiers did not stand side-by-side their counterparts and see a mirror-image of themselves in terms of their apparel. In fact, a nobleman would not wish to… differences in armour and dress displayed personal wealth and all-important status. Heraldry too, although starting to be used less on the battlefield for personal attire in the fifteenth century, was by its very nature unique, differentiating one landed family from another. For troops of non-noble birth, from professional soldiers, to retained yeoman, most were attired in their everyday clothing, with whatever addition of defensive garb that was required or could be afforded, from plate or mail armour to padded jackets, gloves, leg protection and various helmets. Although similar troops would be joined together in the field, e.g. crossbowmen, both weapons and clothing were made to last, so styles of dress and equipment were likely to embrace several decades of style and design. Any ‘uniformity’ derived largely from tabards, badges or insignia relevant to either the recruiting lord or captain or the campaign. Even then, if the responsibility lay with an individual to provide, for example, his ‘white cross’ to signify French loyalty, then the size, position and material used was likely to vary from man to man.
So, the only solution in bringing the prospect of this visual feast to fruition on the wargames table is to treat each model as an individual, utilise the full paint palette, knuckle down to your heraldry, exploit the few shortcuts made available and stay in it for the long haul. Don’t expect to dip into the period and quickly produce results beyond a skirmish game.
Its just keep trucking – stuck very firmly in the crawler lane in the motorway of wargaming.

Posted by painterman at 11:14 No comments: 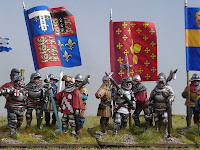 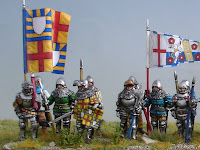 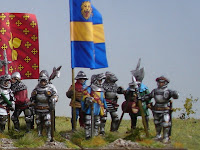 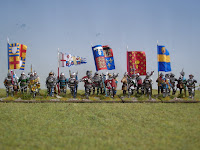 Brief update on the English; five bases of men at arms now completed. Three more are planned. Figures are Perrys with a couple of older Citadel Brettonians converted as flagbearers. Flags included for John, Duke of Bedford (Henry V's brother, died 1435), Sir Gilbert Umfraville (killed at Bauge 1421), William de la Pole, Duke of Suffolk (d 1450) and Edward Mortimer, Earl of March (d1425). These flags by GMB. The standard is from LBMS, and I've failed to date to identify which English nobleman is it - would welcome any thoughts please. 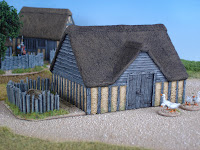 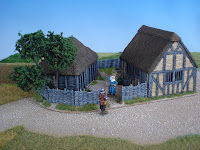 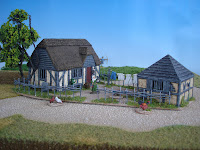 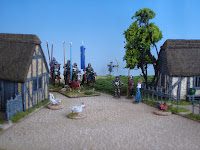 I've finished the first real estate; representing rural life in fifteenth century northern France, although am sure they'll be pressed into service on may other occassions. All are Hudson & Allen castings, which I've had stored away for several years. 'm pleased with how they've turned out; the castings have fantastic detail, even down to the wood grain and the exposed wattle. They look convincing and am sure they've been based on actual buildings.
I've based them to match my terrain tiles and they are sufficiently large to fit in any troops needing to defend them. I've alo made a dung heap, shown next to the free-standing barn. I decided to paint the thatch as 'well established', rather than the just-been-thatched straw colour that most gamers appear to want to paint their buildings. One of the fences is home-made, wire uprights with thin plasticard wound through and the other are resin items I purchased via ebay. To the rear of a propoerty, out of shot, I added in a Timecast allotment casting with various veggie growing (made for HO railways I think, but seems to fit well). Poultry by Hovels (I think).
The current hamlet will be extended to a more substantial village - will purchase more H&A items soon (now only available from the States) and plan to add a windmill later this year. 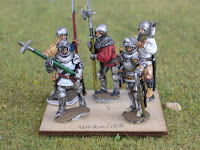 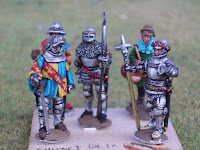 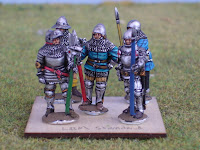 The English army plan is starting to be formed, so that packs can be purchased and painting time mapped out.
It's a fairly straightforward army list, which I've collated from other wargame rules and my own reading. Essentially the English army at the start of the fifteenth century was composed of two distinct arms; the men-at-arms and the longbowmen.
All troops for Henry V's campaigns in France were raised via indentures, a legal contract betwen the crown and selected landed nobility to raise specified numbers of armed troops, for a certain period, at an agreed price paid by the King. All contemporary indentures and the related payments made by the crown, specify numbers of men-at-arms and bowmen. Whereas several wargame rules allow 'billmen' as a distinct arm, I've not found any evidence for the period of these armies to show them as a seperate group. I'm therefore going to create men-at-arms which are primarily nobility, from earls to esquires, with full plate armour accompanied by a few retained troops and householders who are less well armed and who maybe the flagbearers. All will be on foot, in 'defensive' poses.
For the longbowmen its more straightforward; all bowmen - well protected by stakes - with a few captains and flagbearers dotted about.
The other point is the ratio between the two arms. All of my reading, notably Prof Anne Curry's work and the website http://www.medievalsoldier.org/ shows consistent 3:1 in relation to numbers of bows to men-at-arms in the English. Only later in the century do the numbers of bowmen appear to rise sharply. Therefore current plan is for 8 men-at-arms and 24 longbow bases, plus some command bases.
To add some variety however, I may need to deviate from the historical evidence - and am planning to add some pavisers from French towns under English control and possibly some Irish skirmishers (and of course any tempting figures that force their way on the table).
This will be an Anglo-Burgundian force and so variety will come from the Burgundian allies, in terms of crossbowmen, handgunners, etc.
Pictured are the first 3 based for the English men-at-arms, painted with basing and flags to be added.
Posted by painterman at 10:51 No comments: