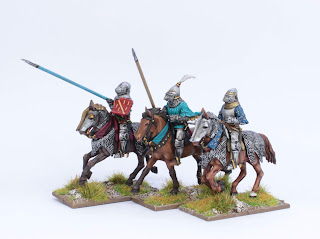 So we're back! Sorry for the overlong hiatus.  I've really been focussing my spare time on the Steel Fist Miniatures business. However I'm not going to include anything about the hobby business on this blog, unless there's an overlap with the historical theme of HYW.

I recently received some test sprues from Alan Perry for their new Agincourt Mounted Knights 1415-1429, to paint a few up for his collection and so am using those for a brief review.


The first thing I was struck by is that it is a packed sprue, in total I’ve counted 77 separate parts to construct a wide variety of knights, men at arms or mounted archers for the circa1400-1430 period. The other design note is that Alan has created separate torsos and legs – which both increases build options and enables riders to be posed twisting in their saddles. In total there are 18 pairs of legs and 36 torsos in the box, so by buying 2 more plastic medieval horse frames (at £3 each), you can squeeze 18 horsemen from the 3 sprues in the box - extremely good value. 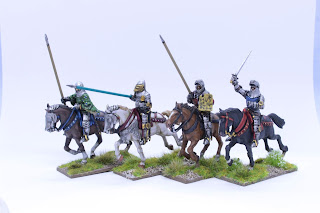 More pieces means more variety for your figures, but this is achieved by having to glue more parts together (which I appreciate isn’t everyones cup of tea). A typical assembly is torso, legs, left and right arm (although 2 bodies have left arm attached) and scabbard – plus the horse which comprises of 3 parts. Then optional extras can include a weapon to an arm, visor, shield, plume or an arrowbag for the archers. Horses also have optional barding – this period is when evidence of protection for mounts starts and each sprue contains a set of full mail (based on the Harley 4331 illuminated manuscript) in four sections to glue to the horse and a chest protection in 2 halves (the contemporary source for which I’m not aware of and which I've painted as both leather and as steel). Two horse heads with steel chamfons and short crinnets are also provided. 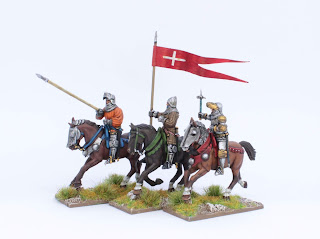 The pack covers typical full steel knightly armour of the circa 1400-1430 period, and much can be seen in Toby Capwell’s book ‘Armour of The English Knight 1400-1450’, although the surcoats and flowing sleeves worn by knights of France and Northern Europe are also included. Two torsos wearing padded gambeson are included, along with arms holding bows, lances and swords, so that other mounted types can be made – including a bow in its cloth cover with a half-circualr strap to add to the figure (which reminds me of the parts you used to get with Brittains toys of my childhood and really shows how far plastic mouldmaking for wargaming figures has come in recent years).

The most fiddly part of assembly for me was adding the mail barding – notably the two halves covering the horse’s chest. I used plastic glue, which effectively melts to join one part to another. The best approach seems to be to attach both sides at the same time to the horses flanks and then glue and hold together the join of the two halves at the front with small pliers, until you get a good bond. The other ends of the mail pieces remain slightly proud and have to be glued down afterwards, again applying some pressure until the glue sets off and creates a solid join. 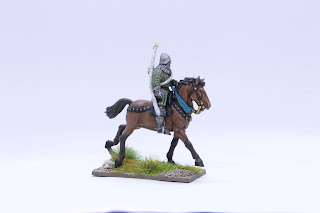 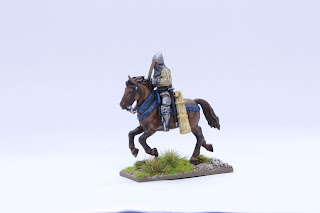 There is potential to mix these with selected parts from the other Agincourt period boxes – weapons, arms, torsos and heads (with some prudent surgery!) – to create even more variety.
Painting of plate armour and mail is actually pretty straightfoward – a good covering of steel tone and any brass detailings, followed by a wash of black and/or very dark brown, and then picking out some highlights with steel or bright silver.

In summary, this is a box which offers great value for money (as each new Perry plastic set seems to do), combining historical accuracy and much thought in design of components and sprue. So we get many options  to build early 15th century knights (or for use by fantasy gamers too of course). I’ll be using a few boxes myself to create the duke of Clarence’s mounted charge at the battle of Bauge 1421, for a demo at this year’s Salute show in London.