A slight divergence from posting updates on my HYW collection – my brief review of the long-awaited book from Tobias Capwell, Curator of Arms at the Wallace Collection, ‘Armour of the English Knight, 1400 to 1450’
(published by Thomas del Mare). 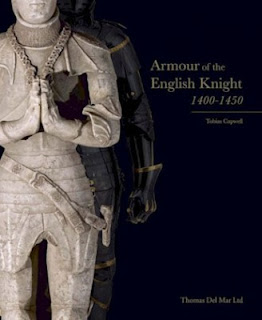 I think that it was about 4 years ago that I became aware that this book was in preparation. It is the development of Dr Capwell’s PhD thesis of some years ago and subsequent research, and is the first of three planned volumes, covering English 'white harness' across the entire fifteenth century. This book is clearly well timed for the 600th anniversary of the battle of Agincourt, and it a significant contribution to our knowledge of that period. It’s the first publication to be dedicated to the topic of English armour and uses as its basis all the tomb effigies  - both carved alabaster and stone  and etched brass – which are extant (supported by contemporary documents and illustrations), as hardly any original armour survives from this period which can be definitively ascribed to English manufacture. Consequently, with Dr Capwell’s professional knowledge combined with his engagement in modern armour reconstructions, this now is and will remain, the definitive reference document for many years to come.

First thing to say about the book is that this is beautifully presented and lavishly illustrated – measuring 24 x 30 cms, with 308 pages - and is well illustrated with high quality images, both photographic and commissioned line drawings which really help the text and understanding of how the armour was constructed and functioned on the wearer’s body. Time and effort has also been invested in the design and layout of the pages within each of the book’s sections. The 300 pages allows for a  generous use of images (mostly aligned with the text which is an immense help when reading) – including full and double page photographs of complete tomb alabasters commissioned for the book – shot with strong lighting against black backgrounds which really enhances images which previously have not been so well recorded. In addition, hand drawn illustrations are provided by two leading armour makers, providing 3D and cut-away perspectives on the construction and function of many pieces, from helms to hinges. 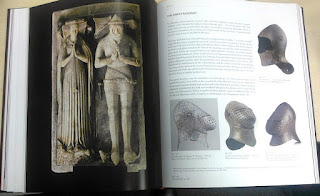 The book is effectively divided into four sections:


In both sections on the armour, the author covers all the main pieces of the knight’s full harness – helm, cuirass, arm defense, vambraces, gauntlets, leg armour and sabatons – tracing the changes (or a continuation of ‘outdated’ styles) across the time periods. Here Dr Capwell’s exhaustive knowledge is in evidence, as all evolutionary styles and changes are explained with reference to existing evidence from the tombs and images of the English knightly classes that remain, primarily the fabric of English churches. The book also contains a full reference section, bibliography and locations for all alabasters and brasses cited in the book – I now have my own sub-list of local tombs to visit.

Dr Capwell’s proposition is that there is sufficient remaining evidence to prove that there was a distinct English style of armour in this period – sufficiently manifest for some contemporary European documents to refer to “englysh”. It’s a style which was of course founded on European armour styles and construction – led by the major Italian and South German manufacturing centres of the fifteenth century - but influenced by a combination of the English propensity to fight on foot and by localised aesthetics in terms of style and design. Some of these differences appear to be relatively subtle (for example the application of decorated vervelles covers on bascinets and applied border decorations of the 1410-20s), others much more pronounced (elongated cuirass skirts of up to eight lames and pauldrons with  deep fluting in the 1440s).

Dr Capwell addresses some of the factors which may have influenced the English style. However I perhaps expected this to be expanded further, and to be specifically contrasted with their European equivalents. How much perhaps did the absence of English facing massed archery on the battlefield in this period effect elements of design? Was the increased evidence for longer cuirass  skirts and enclosed cuisses in the 1430-50 period a direct response to knights fighting on foot with the pollaxe? However the collated evidence presented is a compelling one – although my expectation is that the ‘English style’ may become even more distinct in the second half of the century, as we may see in the next 2 volumes? 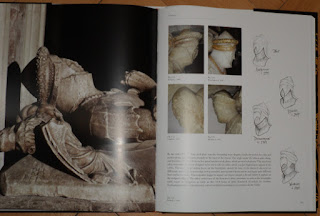 In summary, this is publication of immense interest and reference – one which contains a substantial amount of evidence which I’ll return to time after time. It is also a book of quality, a joy to read and turn the pages of. Whilst we expect to pay a premium price for academic publications (with their inevitable modest circulation),  this book is worth the investment in its cover price by virtue of both the scholarly text and the valuable imagery it contains (many I’d not see in publications on armour
before). It’s left me needing to be patient once again, as I anticipate and await the arrival of volume 2.