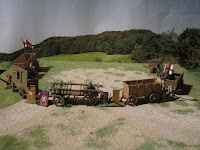 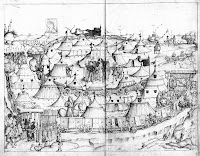 I've completed a few mixed wagons for the English defended encampment at Verneuil.
I suspect that it was common practice to defend encampments before battle this way, as shown in the contemporary drawing from slightly later in the fifteenth century and therefore probably not noteworthy by chroniclers and writers. It was critical however at Verneuil, as the Armagnac Lombardy mounted men at arms broke through the English line and headed for the camp, presumably for some plunder assuming that the battle would be won. They were then forced back from a contingent of English archers either left in reserve of within the camp - a turning point of the battle. The use of wagons as important English defences is also noted at Rouvray (also termed 'the Herrings') in 1429.
The wagons are from Front Rank, Kingmaker (the Hussite modesl without the extra defensive sides) and an independent manufacturer I purchased on the web. They've been dipped and matt varnished for speed and I managed to do them in a week, which is pretty fast for me. The defensive inserts are just pavises, stakes and odds I had to hand.
I have one more to complete, to try and cover three sides of the camp; I'll photo them again soon, when I also finish off some English archers to add to the wagons. 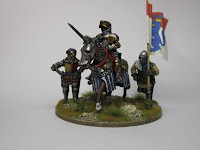 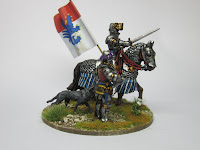 Am now trying to focus all my time on completing the outstanding items for the Salute Verneuil game that Darrell Hindley and I are putting on, for the Lance and Longbow society.
So first up is a vignette base for Guillaume de Lara, Count of Narbonne, who was one of the senior commanders of the Armagnacs. It appears that Narbonne's contingent may have got ahead of the other French units in the fighting and reached the English line first, which had the effect of lessening the impact and effectiveness of the advance on the English position. Narbonne's fate was to be killed at the battle, after which his body was strung up and quartered by the English following a mock trial.
The figures are all Perry HYW range and the flag is a free download. The mounted figure of the count has had a conversion on the right arm; the cast-on arm to hold an upright lance has been replaced with a plastic sword-branding one from the Perrys 'Mercenaries' plastics to give him a 'leadership' pose. The right arm pauldron was then remodelled with putty. The foot knight is the Epringham figure with his moulded heraldry removed to enable a repaint.
Photos taken indoors in some haste. Now working my way through assembling various wagons for use with the English encampment.