RAGE and another Agincourt game

As many of you will know, the Agincourt diorama built by TM Terrain and Perry Miniatures for the 600th anniversary, has already moved to a permanent resting place at the Royal armouries in Leeds. To promote this, the RA have organised a Hundred Years Wargaming weekend on 23 & 24 April, entitled RAGE.

On the Saturday,  I’ll be putting on an Agincourt demo game, using my figures and terrain – effectively a redux of the game at Salute last year. Stuart Mulligan will be on hand too and we’ll consider any learnings of the last game and consider any tinkering that maybe required (it was a French victory last time!). 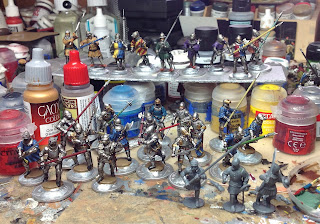 The French forces need to be slightly enlarged in numbers. Although they were very close to the ratios which Professor Anne Curry settled on in her many anniversary publications on the battle; about 8,500 for the English and 12,000 for the French (9,000 nobles with men at arms and 3,000 crossbow/urban militias).

So this now requires a production-line approach to get as many dismounted knights & men at arms as possible to a tabletop state of readiness. I’ve borrowed a speed-paint approach used by David Imrie recently on HYW figures. It seems to be working OK, although the approach is very alien to me and I’ve had to resist the temptation to add another highlight/shade/lining to the figures as I’ve gone along. So assembled plastics have been sprayed with an enamel undercoat shade of silver, followed by two layers of brown/black washes (Army Painter and Games Workshop). Then non-metal areas have been blackened with a single coat of main colour and a quick highlight only on highest points of surcoats etc. If needed I may pick out highlights of pure silver on the plate harness. Heraldry on these coats will be avoided - apart from a handful of notables which Stuart is currently doing to his usual excellent standards - in the interests of time. 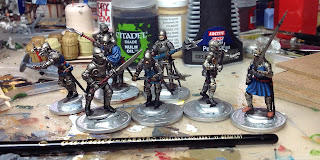 The pics are just of the desk, with models at differing stages. I'm using the same colour palette for groups of 8-10 figures, which will be mixed up when based. They seem fit for purpose. So far I’m on track and once the figures have been based, some flags added and in rear ranks no one will ever know (except for you, dear blog reader!).

I’ll post up some better quality progress pics over the next few weeks.

I'd like to shout out for a great Kickstarter from Steel Fist Miniatures, for Tudor / early 16th century foot knights. Oliver is the designer/owner of Steel Fist, and has a great reputation for finely sculpted and meticulously researched Japanese Samurai in 28mm. This range is steadily growing and I know from occasional emails with him that he's inspired by the challenge of accurately replicating the various armour worn by Samurai armies. 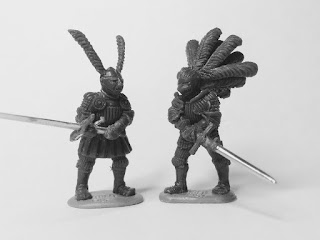 Now he's turning back to western armour again and has done 6 great foot knights, which can be pledged for in pairs. More information on the Kickstarter is here - in case you're interested - it's the first one I've supported and I know its a great way for figure designers to get figures to market which may not have the wide appeal of 'core ranges'.

Oliver designed the sets of plumes that i use on my medievals and he's a pleasure to deal with. So really hoping these figures get supported - those magnificent ostrich plumes look too good to not have a chance to paint!