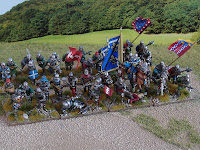 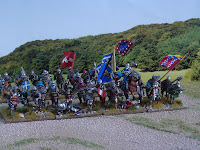 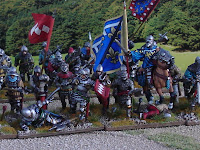 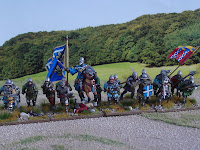 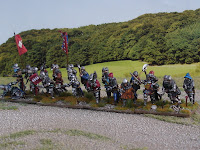 Well, any of you who may just have been patiently awaiting the follow up to the last Armagnac blog entry ( December 2009) I can tell you that your perseverance has finally been rewarded!
Here are another group of eight bases of French Armagnacs, representing noblemen, men at arms and their retainers advancing on the English formations. Pictures are a bit dark, due to the lack of natural light here today. These are all Perry figures and were either painted by me (some months ago now) or Oliver James. The delay was not a planned anniversary blog entry from the last one or down to my usual lethargy, but primarily due to an absence of suitable flags and happily I've purchased some of the recent GMB Designs and used them here.
I did a little work on the mounted figure of the Bastard of Orleans; the casting wears a soft hat, and as as I wanted him to be more dynamically leading I simply exchanged this for a visored helm (a Mirliton casting I think, which is lacking a little in crisp detail however the overall effect seems to work OK). I also changed the GMB French coat of arms flag by painting on a label argent and a bend sable for the Bastard's arms, which are very finely sculpted on the casting.
I have a final number of almost completed French to finish off; hopefully amounting to six or eight more bases - once again they'll have to await a supply of related flags.
Posted by painterman at 03:20 7 comments: 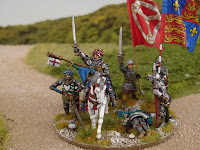 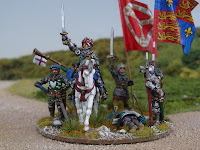 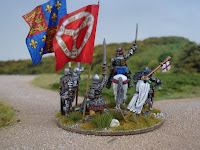 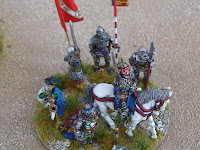 This is my after-the-battle vignette for Henry V.
The mounted Henry and Sir Thomas Erpingham are actually the first figures from the Perrys AO range that I painted up, probably over 3 years ago, when I purchased them just with the intention only of "it'll be nice to paint and base up that lovely command set" whilst I'm doing something else. Here I am many months later finally finishing them off, with the bulk of an English army and part-completed French one behind me... ho hum!
The only interloper here among the Perrys is another Citadel Bretonnian, who seems to play a regular role as the enthusiastic banner bearer, this time holding the Holy Trinity banner that Henry had at Agincourt. This and the English Royal arms are from the LBMS HYW flag sheet.
Posted by painterman at 02:56 7 comments: 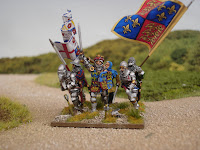 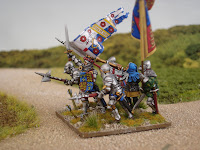 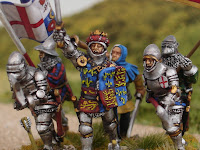 This is the command stand for my English army when used for the Agincourt period, showing Henry V in battle. The royal figure is the Perry mounted one, cut at the waist and re-attached to legs from man at arms figure; the shield was carefully liberated from the page from the same personality pack using a fine hacksaw blade.
Other figures are Perrys, except for the trumpeter who's an older Citadel Brettonian. Flags are from GMB Design (arms of England and France) and LBMS (Henry's personal banner).
This is one of two Henry V figures I've worked on - other one to be posted imminently.
Posted by painterman at 08:52 6 comments: