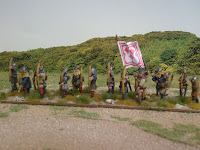 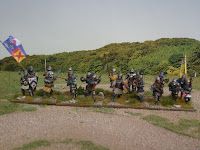 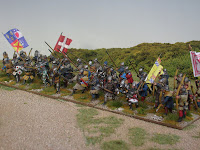 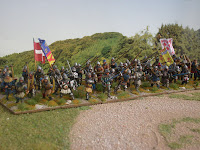 The remainder of the Scots, that I began posting in December last year ; these being archers and men at arms. As previously notes it appears that larger numbers of bowmen were deliberately hired among the Scottish levies recruited in the 1420s to counter the English successes.
The figures are a mix of Perrys and Citadel Brettonians, which go together quite well (as they are from the same designers). The Citadel figures are based on the armour and attire of an earlier phase of the HYW, however I've used them on an assumption (completely unfounded in any records) that the Scottish captains raised troops for the wars in France, from among the less-affluent tiers of society, who could not afford the latest in arms and armour (..works for me anyway!). Also I've purposely used a high proportion of figures weilding axes and two-handed swords for the men at arms, based on the entirely anachronistic visual reference to Celtic Gallowglass and highlanders.
Figures are painted by Jim Bowen, Oliver James and myself, flags from Freezywater. The heraldry, either on flags or surcoats, includes Thomas Blair, Edward Lennox, William Stewart and the earl of Angus.
A holiday-induced hiatus will now follow...
...oops, have realised that couple of pics are a tad blurry - sorry (will re-shoot after hols)
Posted by painterman at 12:09 6 comments:

After a hiatus, I'm now resolved to get my English and French armies to a position whereby I have all the key arms needed, in sufficient numbers, to have a small scale game. This will not prevent further longer term additions, such as Burgundian allies, but also mean that I can put them aside 'completed' with a clear mind, for when the next Perry WotR plastics arrive.
To get to this stage it looks like I need to do the following. For the English; a couple more longbow and dismounted men-at-arms bases, some command vignettes (inc Henry V), baggage & waggons and plenty more stakes.
For the French I have some completed Scots archers and men-at-arms to base up, several more men-at-arms bases, command groups and I want to have mounted coustillers as a second-rank to support the mounted French men-at-arms. If time permits some armed peasants/brigands would be useful, perhaps using a mix of designers (as the Perry ones appear to be permanently stuck on the workbench!).
So plenty to do.
Picture above is the starting point to fill in these gaps. Thought I'd see if I could get a little more variety by utilising plastic spares from the WotR's box. This range does not seem to lend itself to easy conversions, (the type that I can achieve!) but I'll keep thinking if there are others to do. The advancing longbowman pose came from a conversion that Oliver James has done on one of his figures, so credit goes to him.
These will be primed and then painted next month when I'm away on hols.