The washing of the longbows* 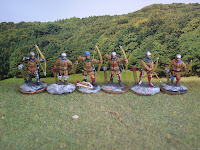 Just a short WIP update. With the launch of the Perrys WotR range looming somewhat (circa 12 weeks and counting down), my focus is now to get both armies to a stage of semi-completeness asap. First up are the English longbowmen, which need several more figures adding to get them to a close-to-planned state, ie 20 bases rather than the 24. I'm testing achieving this by a possibly speedier painting process, on a psuedo-production line basis, as the finished figures will get mixed in when based to achieve a non-uniform medieval appearance.
So I've tried is to use washes more than I've ever done previously - not the complete dipping process (which personally creates a finish to my liking) - but Games Workshop washes, as I've read generally positive reviews about.
I stared using them on the padded jacks of these archers. The jacks were painted in Foundry Buff Leather (mid-tone 7B) and then had GW Devlan Mud & Sepia 50:50 mix washed over. This adds deep shadows in the thin creases of the jacks - which is difficult to achieve by hand - as well as dulling the overall colour and creates some contrasts with the raised surface areas. I've then picked out highlights using the Buff 7B straight from the pot.
For hands and faces I've applied the same method. Foundry Flesh mid (5B) with GW Orgyn Flesh wash and then highlights on nose, cheeks, chin and forehead with 5B again. Not much facial details show with these helmeted figures, but I think next time I'll pick out shadows on the eyes, nose and mouth with my usual method (Plaka Red Brown) post wash and before the highights to achieve more depth and contrasts - although this will add to the overall time to finish a figure.
Overall I'm satisfied with the final figures, and which feel like they've been a little quicker to complete (although no stopwatch was set). Am now contemplating using the washes more; on the other clothings at least. They do create neat natural shadows and exploit the fine sculpting of the castings. However the trade-off is that washes do 'dull' the paint they're applied over and I don't want a 'dipped' finish, so adding the highlights as I'd usually do, will still be needed.
I'll post up the next batch and we'll see...

* with apologies to Donald Morris.
Posted by painterman at 13:41

They are looking very good so far as to be expected from your previous work.I really like the background you used for the photo.

Thanks for the comments Christopher. The photos background is a piece left over from a model railway back-scene, the rest of which is attached to the end of my wargames table (that butts up to a wall). Got it from here for info, http://www.internationalmodels.net/acatalog/Auhagen_Backscenes.html

Thanks for the link Simon,I might try it myself sometime.:-)