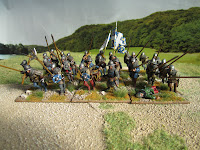 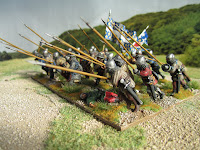 Pictures of the last spearmen for the Scots contingent based up and ready; these were painted for me by Jim Bowen and are mostly Perry Miniatures (with plastic bucklers and targes added from the Perry Mercenaries box) with some older Citadel figures in the command group.
As previously posted, Scottish mercenaries were supplied under an agreement made in 1419 by the uncrowned Charles VII. They provided large numbers for the Armagnac forces at Verneuil and suffered heavy losses in the defeat according to the chroniclers.
Flags are by GMB (Douglas) and free download (French arms).
More figs on the way very soon...
Posted by painterman at 15:31

Lovely action in the figures!

You have really captured a sense of movement in the basing of these, the English will cut them to pieces of course but they do look lovely !

They are looking beautifull.