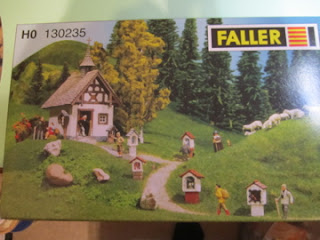 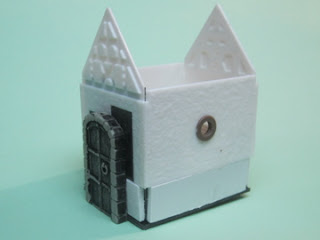 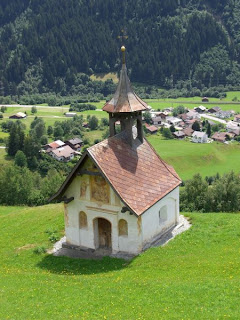 The next few postings will relate my attempt to build a small medieval chapel, the type that would have been a typical site along roadsides before the Reformation and which I can use with any of my medieval armies. I'm taking a modest step out of my comfort zone of figure painting into converting a plastic kit.
The idea has been taken from one that John Boadle has already completed for his own collection and which looks absolutely great - mine will use the same approach - but won't match the quality of his. The framework is a Faller HO railway kit (which comes with numerous very useful shrines as you can see on the box lid).
First step is to raise the height to make it more compatible with 28mm figures. I've cut extra strips of plasticard and added to the foot of the walls. Those of you with keen eyesight will note how my inability to cut a straight section of plasticard attempts to recreate the odd angles seen in medieval structures(!!). I've blocked up the original doorway and window, as I'll add the larger door - one of John's castings that he very kindly given me to use on this model. The inside has been braced with some balsa struts as it has a degree of fragility as I'm not securing it to the original base that comes with the kit.
So far, so good. Next will be cladding the lower walls with stonework to disguise the lower walls.
Posted by painterman at 03:38

Love the chapel & I look forward to seeing it develop...

Great post and I'm looking forward to the build too!