Burgundians for Cravant (I) 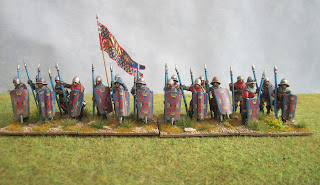 So after a hiatus I have some completed Hundred Years War figures. These are the first of a few contingents that will be required to supplement my existing collection, to enable us to put on the proposed demo game of Cravant 1423 at next year's Salute in London.

First up are Burgundians to fight alongside their English allies. These are pavisers, using the Perry AO range of figures. Figures painted by Jim Bowen, to which I've added the pavises and the basing. I've used plastic pavises from the Perry's Mercenaries box - partly as I have a large number of them and partly as I wanted to use the wonderfully detailed LBMS transfers. These designs are for the Burgundian Ordonnance army of Charles the Bold rather than for that of Philip the Good; there's no evidence that I'm aware of that the St Andrew's cross and steel with flints devices were used before the dukedom of Charles. However they look great and they'll help identify the troops on the tabletop from the French and English. 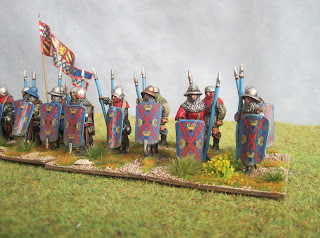 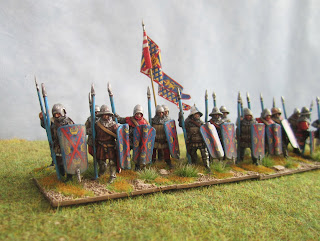 I have some accompanying men at arms nearly done, so will post these soon along with some thoughts on the battle, as well as the 'to do' list to represent the battle for Salute 2013.

The unit looks splendid! So glad you keep returning to this fascinating period and a great range of figures.

They look excellent, the flag and Pavises really set the unit off.

Wow, spectacual looking unit. The banner, the bases and the shields really makes wonder to the overall effect of the unit.
Great work.

Excellent looking unit as always, the transfers and the banner work really well. They're hefty chaps too with a bit of a rugby team look about them.

For your consistent brilliance I've nominated you for a Liebster Award;

I don't know if this is quite kosher, but I've also nominated this one for a a Liebster Award. http://rabbitsinmybasement.blogspot.ca/2012/11/id-like-to-thank-members-of-academy.html

Stuart & James
Many thanks to both of you for the nominations (and congrats to Stuart for already receiving recognition for the really excellent Army Royal blog).
We'll see what happens....
Cheers, Simon.

Wonderful figures! I do like the flags and the pavisses, a great work!