My HYW armies will be making another outing in 2013 at ‘Salute’ show at Excel in April, where we’ll be putting on Cravant 1423 with the Lance and Longbow Society. I’ll start to post up my progress with the figures and terrain that I need to do for the game, but first up some background on the battle. 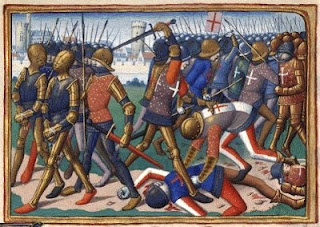 Cravant is another English victory of the post-Agincourt period of English ascendancy in France, against the weakened government of Charles VII. Strictly speaking this was an Anglo-Burgundian victory that arose from the treaty made between the English government of the minor Henry VI and the dukes of Burgundy and Brittany in April 1423, to provide mutual military aid and co-operation against their ‘common enemies’ - namely Charles VII and the Dauphin. The French army that took the field also comprised of large numbers of non-French and should be regarded as primarily a Franco-Scots force.  Charles VII employed foreign mercenaries to bolster French forces to defend his territories in the wake of Henry V’s victories. John Stewart, earl of Buchan had recently been appointed as Constable of France and led a large contingent of Scots. In addition sources cite Lombards and Spanish being in the French army at Cravant.

Cravant lies on the river Yonne and in the summer of 1423, Burgundian forces led by Lord de Chastellus had taken control of the castle, effectively blocking French lines of communication and the movement of troops from the south west to the contested regions along the Seine river. The main Franco-Scots army invested the town in mid July, building siege works and cutting off supplies. The Burgundians resolved to relieve the town and assembled a force, which joined with English troops led by the earl of Salisbury at Auxurre on 29 July. A council of war laid down the arrangements under which the joint forces would co-operate. By 30 July the Anglo-Burgundians had reached Cravant. On reconnoitring the French encampment, which was in a strong location on low hills outside the town, they doubled-back their army (which had travelled south in hot weather) via Vincelles to approach Cravant along the west bank of the Yonne. On 31 July both armies were arrayed for battle; with the river between the two forces.

Cravant was another engagement which did not appear to be an inevitable English victory beforehand. The two forces appear to have been of roughly comparable size. The river today is about 50 metres wide beside Cravant and represented a significant barrier for whichever force decided to cross it. Psychologically the English may have had the advantage; although of course this can’t be proven. However since 1415, they had inflicted a number of successive victories over the French, either on the battlefield or using their siege train to acquire control of large areas of Northern France. Most of these victories had been the result of strong English defensive tactics, using massed archery to disrupt the advancing French prior to intense hand-to-hand fighting. On this occasion, perhaps buoyed by confidence and high morale, Salisbury decided to initiate a surprise manoeuvre and attack the French and Scots directly, crossing the river and nearby bridge.

According to Jean Waurin (a contemporary chronicler who would witness the battle of Verneuil in the following year, and so who’s account maybe relatively reliable and who is the only close source for Cravant), after over 3 hours of inaction by either army, the English “suddenly advanced with the ardour of berserk courage” - crossing the river which rose to waist height, whilst longbowmen loosened barrages of arrows on the Franco-Scots. It appears that strong leadership from the earl of Salisbury and Lord Willoughby, plus high morale, allowed the English to cross in substantial numbers and reform sufficiently to then engage in close melee. Willoughby also forced a crossing over the bridge, allowing troops to attack in numbers.

The result of the fighting may have determined by the timely arrival of a small force from Cravant town, led by Lord Chastellus, which attacked the Franco-Scots in the rear or flank as the melee developed. This effectively created a tipping point; as the French were forced back and the Scots surrounded, taking high casualties. In all Waurin claims 300 prisoners of note were taken – meaning those of sufficient status and means to pay a future ransom for their release. 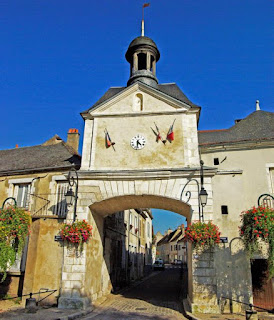 And so to the demo game. There are a number of obvious elements which we need to plan to replicate, either in the tabletop set-up or within the mechanics of the game. The essentials are:
-       the river Yonne and bridge
-       Cravant town walls
-       The Anglo-Burgundian attack and river crossing
-       The flank attack from the town.
Also, if time allows, it would be good to create some French siege works, purely to add to the overall visual appeal of the game.
I'll aim to pick up on each of these elements in future posts....

PS - For further reading I can recommend the publication of the Lance and Longbow Society, 'Hobilar' – number 52 has a well written comprehensive account of the battle and ideas for a wargame refight.

Great news, I've played cravant before at an early Northern L&L demo game with Steve Ayers, and now it looks like I might get down to Salute this year for what promises to look like an excellent demo game

Looking forward to see the fruits of this one, one of my favourite area's and a bit of old family history there too (a Stewart and all) should be a good one.

Would love to see that !

Fabulous choice. Really looking forward to this one :-)

Look forward to seeing this at Salute.

Fantastic, I am looking forward to the progress and seeing the game at Salute.

Warfare is a fascinating subject. Despite the dubious morality of using violence to achieve personal or political aims. It remains that conflict has been used to do just that throughout recorded history.

Your article is very well done, a good read.