Bridge on the Yonne

This is the final terrain piece needed for the Cravant game - and to use with my new river sections at other times. The bridge which Lord Willoughby led the Anglo-Burgundian attack over the Yonne river. 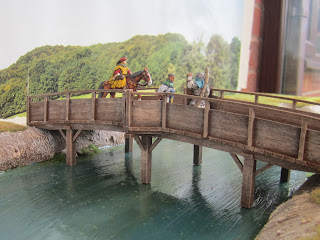 There's no specific reference to whether the bridge in 1423 was stone or wood; contemporary medieval illustrations of the fifteenth century show a mix of both types in countryside vistas. I thought a wooden one would be more visually appealing and add another type of material to the terrain boards. Whatever the medieval one was made of, it was replaced by stone in the early 18th century - drawings of the replacement are shown below. 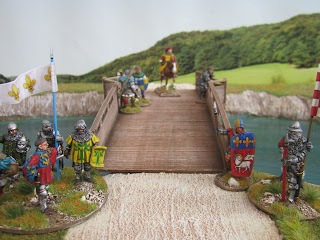 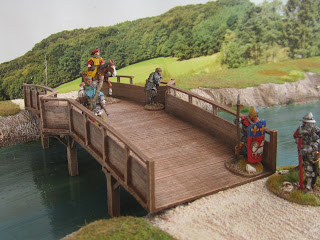 It's been created by James at Oshiro Model Terrain, using balsa and based on images I found. As no actual wooden medieval bridges still survive, the main reference I used is the contemporary Froissart Chronicle illustration shown below, with a simplified number of supporting pillars and less arched construction. I asked James to add the 'V' shaped passing-points at the middle of the bridge, which copy those seen in English packhorse bridges that are still intact today. Thankfully my measurements were OK for the model to fit the river sections I'd made - a minor 'heart-in-mouth' moment earlier this weekend following the arrival of the parcel! The width of the bridge will accommodate my 60mm wide bases for my other medieval collection. A great nice bit of modelling by James; I'd recommend a look over at his commissioned work and resin castings too. 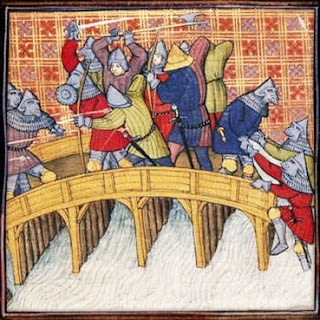 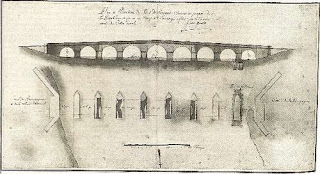 I'm definitvely a great fan of this project ! I hpe seeing one your tables one day...

Superb! Love the colour of wood you achieved!

This is going to be a table to see!
I'm just sick that I can't make it to Salute!

Would love to see the finished table but like David won't make it to Salute. Pity, but a great looking model.

I's beginning to feel a little sick in my stomach that I'm going to miss this years Salute :O(

Fortunately I will be making it to Salute and seeing this in the flesh will be one of the highlights for me. The bridge and river really catches your eye, superb.

Lovely... Yet more inspiration for my own river project!

BTW had no luck getting 1:12th scale wheels so for for my mills... Guess I will scratchbuild a wheel now.

DHC
The link to Hobbys - where my wheel was purchased - is here (in case you wnat to try, before making one)?
http://hobby.uk.com/horse-drawn-vehicles/cart-wheels.html

Excellent! Looking forward to seeing the pictures of the finished table at Salute. One year I will make the trip south to see Salute, but sadly not this year.