Although it's outside of the intended period for this blog, I thought I maybe forgiven for posting a brief, personal review of the above book - which maybe of general interest to any 'medievalists' and also breaks the hiatus of postings too. 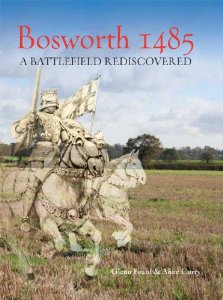 I purchased my copy at the Bosworth battlefield reenactment event in August, where the authors gave an hours introductory talk on some of their conclusions and sold signed copies. The book claims to be a new interpretation of the famous battle for two main reasons; firstly it applies all the archeological studies and subsequent scientific analysis on the site made since 2005 and secondly that the historical interpretations have been approached only from primary sources and seek a perspective based on the battle's mediaeval context, rather than being coloured by the Tudor age which followed.

Broadly the book falls into four sections - how the battle site had traditionally been mapped and located in the wrong place, the historiography of the battle, the relocation of the site based on the field studies and finally the battlefield finds - split between the personal items and the scientific investigations of the artillery shot.

First observation is that this is a substantive publication. It comprises of 264 pages in A4 hardbound format, including photographs and maps which aid the reading and understanding of the text. This is a study undertaken by academics (both experts in their fields) and whilst it is very readable, all of the assumptions, proposals and theories are founded on empirical evidence of some kind, either historical or scientific. Consequently there is much evidence provided and much detail to wade through. In many places the authors recognise the limits of their understanding and that many specifics cannot be known for certain. In the conclusion they describe their work as their "tentative reconstruction" and on many occasions acknowledge that evidence is not incontrovertible and that future studies may revise their own conclusions, particularly as more archeology is done on other parts of the site ( as well as other medieval battlefields) and more scientific analysis is possible on firearms etc. 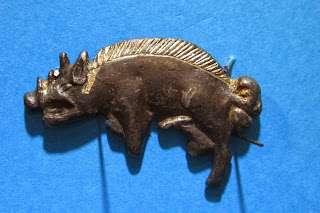 So what does the book tell us about our current understanding of Bosworth? In particular, what does it inform the wargamer contemplating a refight of the battle? I've highlighted the following, but I'm sure that others will pull out other salient points too.

The size and composition of the armies:
In the context of other battles in the Wars of the Roses, Bosworth seems to have been relatively small in terms of the armies. Henry's army comprised of exiles, foreign mercenaries and those who joined him since his landing in Wales. For the King there is some evidence that Richard found problems in getting active support, arriving in time for the battle. Richard's army appears to have been the larger - estimated at 7-8,000. This also fits well with the likely geographic disposition of Richard, which assuming a 6 man deep formations could have been lower at circa 5,500?  However not all were engaged in the fighting on the day. Henry's army is estimated at around 5,000. Lord Stanley at 1,500.
Using ratios from the 1475 English campaign to France and known contingents of the main noble leaders, the royal army's composition is about 6:1 ratio of archers and other infantry to men at arms. Henry's composition differs due to the foreign elements - which included French and Scots - with an overall smaller number of man at arms. Its possible that some of these were pike armed (but by no means definite) and there's an argument that they may have been a mix of archers and polearms troops, akin to the 'Franc Archers'. Stanley's force is assumed to reflect a 6:1 ratio, like the royal forces, as it was raised in the same manner. Richard's army contained artillery, mostly breech loading - whilst Henry appears to have collected artillery en route, there is as yet no evidence that it was used in the battle.

The disposition of the armies:
Richard took up a defensive position on 22 August, awaiting Henry's advance from the west and attack. The most likely location of Richard's forces and the subsequent engagement are covered in some detail. Two possible locations are discussed, with the most convincing being along a stretch of high ground to the south of the Fenn Lane, with the army arrayed at an angle of roughly 60 degrees. This higher ground gave the right lie for the royal artillery to be used - which is likely to have been dispersed between the 'battles', rather than concentrated into a battery. The position also put the marsh in front of most of Richard's army - which later became a problem in restricting some of his troops to become engaged in the melees.
Richard may have spilt his army into the three traditional battles - with Norfolk on the right wing, Northumberland in the centre and Stanley on the left. (There is even a question as to whether there's enough evidence to confirm that Northumberland was even at the battle, I think).However its possible that Stanley started the day further south and not aligned alongside the royal army as one of it's wings. Richard retained a small mounted reserve.
Henry appears to have put most of his troops into the van, commanded by the earl of Oxford, which may have comprised as much as 4,000 of his total, which would have most probably included all of the foreign mercenaries. This would give the rebel army the unusual composition of only two battles and not the traditional three ( ...a interesting point which does not appear to be addressed in the book).

The battle:
The battle started with the royal artillery firing on the advancing rebels, moving from the west along the line of Fenn Lane. It then appears that the large van of Oxford engages with Norfolk's battle, on the edge of the marsh. Northumberland's battle then fails to advance and engage in the fighting. Whether this is due to his alleged 'treachery' or that the marsh, which was directly in front of his position on the ridge and which had assisted Richard's defensive position, effectively prevented him from doing so is for further debate.
It's then possible that Oxford and Norfolk's forces disengaged from their melee for a short time. When Oxford advanced again, this may have been the time when Lord Stanley 'turned coat' and attacked the Ricardian army -  effectively tipping the balance of the forces in favour of Henry Tudor.
At this stage it seems that Richard saw both a  need and an opportunity to end the battle by killing Henry and led a mounted contingent of his household towards Henry's position. The fighting was clearly close to Henry, as his personal banner bearer was killed. This location is where the personal items of high status have been found - the boar badge and sword cross-guard. However this position was on the edge of Fenn marsh and in the melee Richard is likely to have been unhorsed and then finally killed by a halberd blow.
The king's death then led to a rout of the royal forces and the death of Norfolk and others near the site of Dadlington windmill. Given the lack of may items found in the rout areas, it maybe that total deaths from the rout were small, relative to the Towton battle finds and archeological footprint? 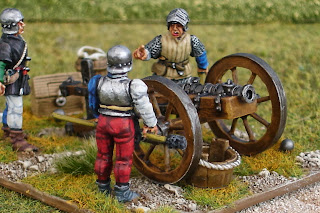 This is a study of considerable weight, by two expert authors. Mt brief read will need to be done again and I need to spend more time on some of the chapters - so my apologies if I've misunderstood any of the content in the forgoing review. Certainly there is much thats ground-breaking in the study of late fifteenth century artillery based on the finds; this is a large chapter and which I've not mentioned above. If you have an interest in the wars of the roses or late medieval warfare - this book has to be very highly recommended.

Thanks for the review.. May just out on the Christmas reading list :-)

Nice review and summary. Thanks!