Our contribution to the Royal Armouries Gaming Event at Leeds was to re-run the demo game of Agincourt. The 'we' were Stuart Mulligan and Stephen Hall, using my figures and terrain.

The set-up reflected the French battle plan, drawn up a few days before the battle but not implemented on the day. This had crossbowmen positioned in the van and three main battles of men at arms, with small wings of mounted men at arms. We used 'Hail Ceaser' rules with the amends made by Alan & Michael Perry (thanks to them and the others at the event who kindly rallied to the distress email sent out on Friday evening when, sitting in a Leeds pub, I realised that I'd not packed any rules!). We'd planned to run the game twice during the day, using Impetus for the second one, but both time and energy ran out on us. 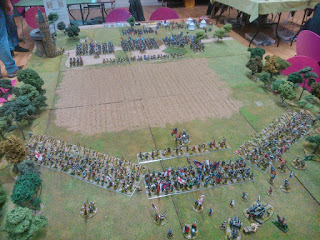 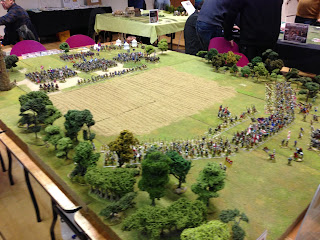 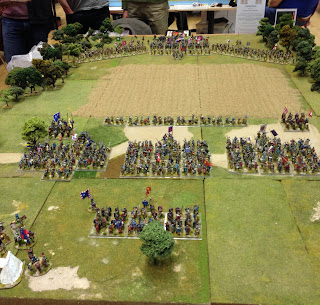 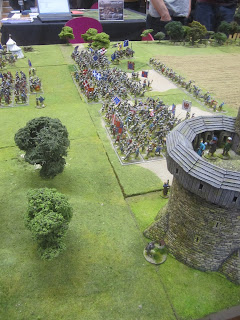 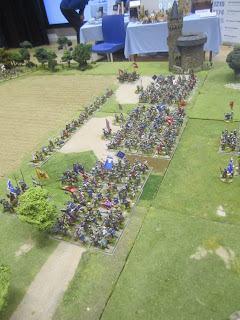 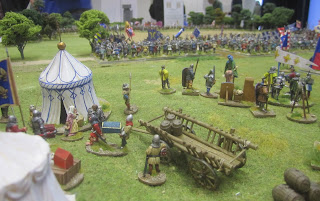 The French attack stuttered a little at the start, but Stephen made headway with his mounted wing and Duke of Orleans battle, only to meet an effective arrow storm which inflicted casualties and stalled the advance. In the centre the crossbowmen got into range and exchanged shots with the English archers. 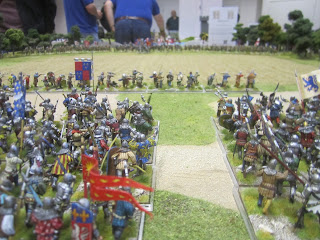 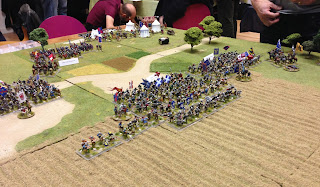 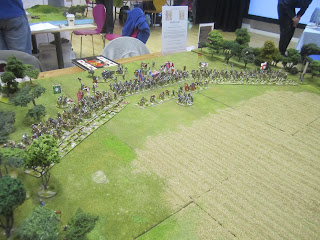 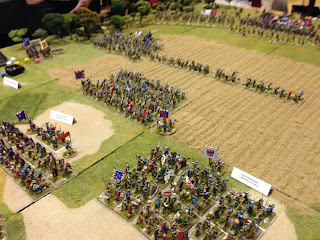 The French nobility pressed on and the attack progresses in echelon, with the right wing advancing slowest, probably resulting from Stuart's dice throwing! The centre battle finally made contact - sweeping aside the first line of longbowmen and then pressing home into hand to hand melee with the English centre, including King Henry and the leading nobility. This seemed like the pivotal moment, as the French had superior numbers in support to exploit an advantage gained. However they narrowly lost and as they were carrying casualties from the advance under arrow shots, they retired and broke. 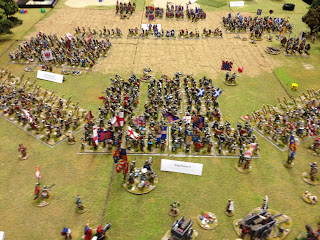 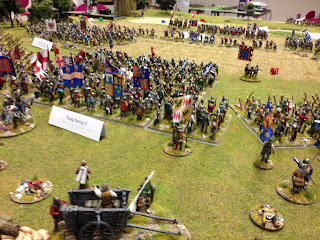 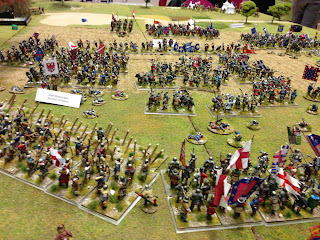 On the English left the archers managed to stall the advance of the last French advance, again the accumulation of casualties from arrow storm seemed to be the main factor.

So, Henry's God-given rights to the French crown were upheld, and on St George's day to boot! 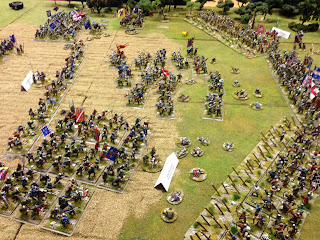 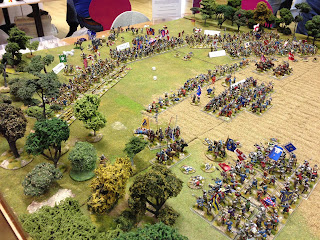 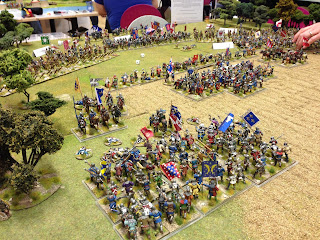 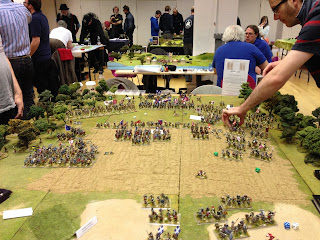 The day seemed well attended, with a good flow of visitors from mid morning - including a good number of wargamers who were aware of the event, but some of the visiting public who were brave enough to enter a room full of folk hunched over tables and moving model soldiers about! We did our best to convey what we were trying to do with the game. There was a good selection of other HYW games and related societies.

It was great to talk to everyone on the day. Another highlight was the informative illustrated talk by Dave Marshall and the Perrys on planning and constructing the Agincourt 600 diorama, which we had a quick look at in its permanent location at the Armouries. Sadly we didn't have time to take in all the armour galleries. 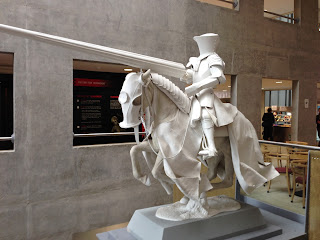 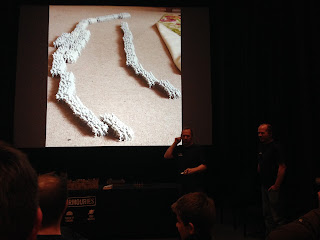 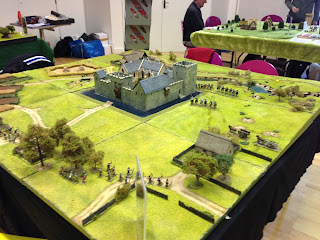 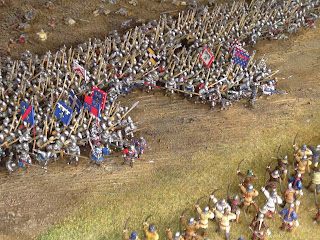 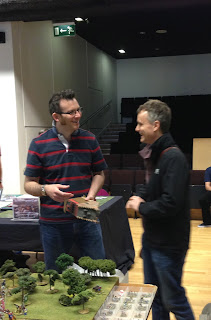 Looked a grest day out. I didn't know the French had a pre-planned setup before the battle? Wonder why they never used it?

A great day as always, I really enjoyed myself and what a venue - fitting for gamers of our calibre obviously

Delightful! Anything you can share about the HC rules mods for this specific scenario?

I have a buddy planning an Agincourt demo game at a local convention next year. He's still in painting and assembly mode right now.

Hoping I can help him by conveying any learning from your experience.

Excellent game report and wonderfull pictures! Thanks for sharing!

Dilettante Gamer - we applied some of the Perry amends to HC (longbows and crossbows specifically I recall), these are published on their Facebook page for one of their WotR games earlier this year. Hope thats of use? All the best, Simon

Did you know that you can shorten your urls with AdFly and get dollars from every visit to your shortened links.