Another posting about a new terrain piece; one planned to complement the recent model of the church. 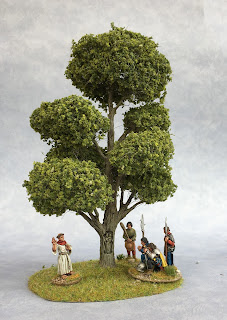 I found a manuscript illustration of a religious image carved into a tree trunk. I thought this would make an unusual model for my medieval scenery. The contemporary illustration appears to show the image of a saint being blessed by a bishop, after being created by a carpenter. I've not seen any other images from the period however which show a tree with an integral religious image carved in. 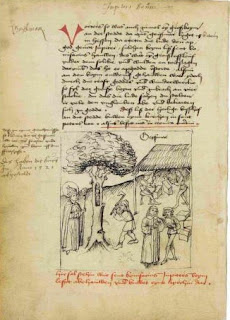 After I'd started the process of recreating the tree and saint, I looked more closely again at the image and it's context.  I'm now more certain that this doesn't show an icon set in a tree. I think it's more likely to portray a narrative about the process by which carpenters created wooden icons - taking a commission, carving the image in the tree before cutting it down and then finishing the piece in a workshop (destined no doubt to be placed in a religious establishment or home of a high status individual). There may be good reasons for carving the image in a standing tree, but I would have thought that it was a more difficult process, as the wood would be wet and unseasoned to carve. 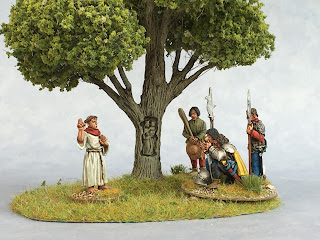 The model has been made by Debris of War - who I'm pleased to say are now making some of the trees previously made by Keith Warren of Realistic Modelling Services (who's enjoying his retirement). They sent me a trunk casting, which I drilled out a space to fit an icon that was a Green Stuff press moulding from a railway scenery model I have. Debris of War then completed the tree with paint and flock, to match others I have. I'm pleased with the result and I think it'll end up within a walled graveyard base to sit alongside the church, which seems appropriate. 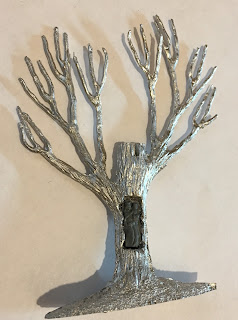 I love it, excellent curiosity piece

Great piece and interesting find like you not sure if sculpting a living object makes sense unless it was to remain in position you would be open to the elements whilst doing your work.
Looking forward to seeing this in the setting you described with the graveyard very appropriate.