So the Bodkins game at The Other Partizan show in Newark on 20 August, will be Crecy - the first land battle in the Hundred Years War of 1346.

Several other Bodkins have been working on this game for a couple of years; growing their collections of English and French for the mid fourteenth century. My contribution is relatively modest and I'll post more on these next week as I complete them - as well as pictures of the game itself. 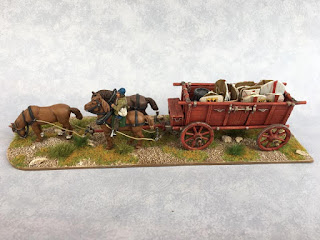 First up are a couple of carts carrying the pavises of the crossbowmen from the Italian peninsular, who were employed by King Phillip VI of France via Genoan captains for the campaign, since the English invaded in July 1346 and besieged Harfluer. At the battle the French were confident of victory and ordered the crossbowmen to advance and screen the French noblemen, without the protection of their pavises which had not been unloaded from the baggage. Consequently the crossbowmen took heavy casualties from the opposing English longbows and started to retire, only to then be ridden down by the first wave of attacked mounted French knights! 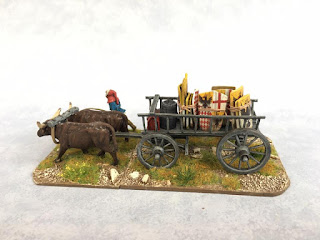 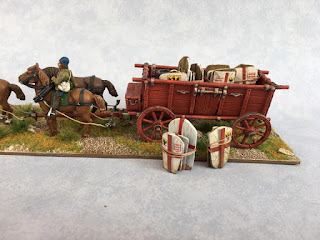 The wagons are existing ones and I've simply added mix of Claymore Miniatures metal pavises, with LBMS transfers, and plastic Perry ones sandwiched in between the bundles to bulk them out. I decided (based on a lack of visual evidence) that the paves may have been strung together when moved on wagons. These will just be placed on the wagons for the game.
Seems to work OK...

They look excellent Simon, this is going to be a game of epic proportions!