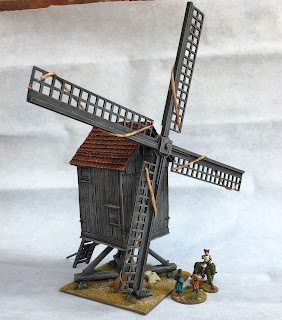 Painting all done. Loads of great detail on this Grand Manner casting, so dry-brushing and washes does it. I added furled sails, using rolled knapkins and fine string soaked in diluted glue and based on illustrations of working ones at the start of the last century. My aim to show them quarter-furled became too complicated in the time I had left.

According to several chroniclers, it was from a windmill behind the English position that Edward III prepared the positioning of the army for Crecy, and may have commanded the battle from there too.

Thanks for the comments on the knights - will post a report & pics of the game.

Fantastic and very well painted, love the colour you have chosen for the wood.

fantastic points altogether, you just gained a new reader. What would you suggest in regards to your post that you made a few days ago? Any positive?national archives civil war records