The English knights for Bauge are completed – sorry that I didn’t have an opportunity to create a posting about my work in progress with these – the Salute deadline is looming closer (…worryingly). 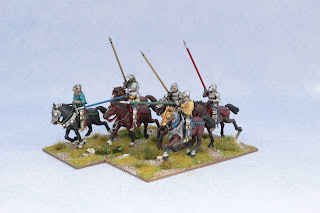 These are all Perry plastics from the recent Agincourt Mounted Knights box. I’ve based them on 50x100mm bases, which matches the frontage of the rest of my HYW collection. I’ve really cheated a little by basing them with a 50mm frontage but placing only 3 models on each (an idea from Lewis, who I occasionally game with). They are relatively speedy paints, so the final detail/highlight that I’d usually apply is missing from both horses and riders.  Washes on the base colours and a single highlight in most cases - but they’ll look OK in the cavernous semi-gloom of Salute. 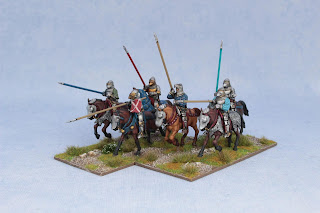 Most figure builds are out-the-box, although with the mounts I’ve removed some tack (the straps across the rump and some studs, as I get fed up with painting these en masse). As per previous post, I’ve fiddled with some chamfrons and the peytral (removing some orbs and painting them as leather, rather than steel).

There will be 3 units of English men at arms for the game; each denoted by a leader and their displayed coat of arms – duke of Clarence, Lord Roos and the earl of Huntington (flags by GMB). The rest of the bases I want to be ‘agnostic’ so that they can also be used as French in future games (such as Patay). 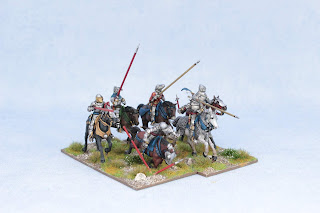 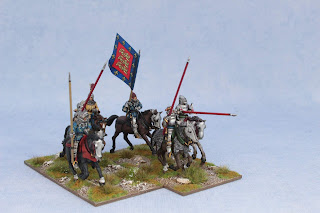 I’ve done a couple of caparisoned horses. It seems that caparison were probably not commonly worn by the early 15th century apart from tournaments, although contemporary illustrations do show them, however this is possibly an artistic device to denote kings and leaders through the display of their heraldic arms? So Lord Roos sits on a Fireforge plastic horse (with Perry head) and Clarence on a Steel Fist Miniatures – both requiring some surgery to cut away the insides of the riders’ legs and the addition of saddles with modelling putty, to make a good fit. 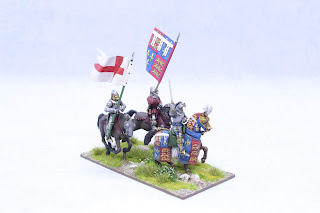 I’m indebted to Matt Williamson of Le Hotel de Herce for his knowledge and insights on the mediaeval and modern battlefield site and information on English knights at the battle. Consequently I’ve adjusted the table layout slightly to reflect the most likely terrain for the battle (more on that anon).

Great stuff! Look forward to see it all on the table at Salute. /Mattias

Very nice indeed and quite a spectacle for speed paints !

Looking forward to hearing how you get on, good luck mate.

I cling on to listening to the news bulletin speak about getting boundless online grant applications so I have been looking around for the best site to get one. Could you tell me please, where could i find some? mexican war service files