The battle of Bauge was primarily fought on the English side by the mounted men at arms, led by Thomas duke of Clarence and other knights. The chroniclers tell that the earl of Salisbury followed Clarence with a contingent of archers, possibly comprising of the rest of the English army, or just an element of it given the apparent haste with which Clarence had set off to engage the Franco-Scots. 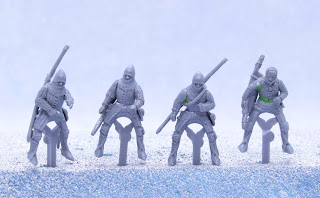 Salisbury’s archers appeared to have arrived at Vieil Bauge on the aftermath of the fighting and death of Clarence. They did engage with the enemy who held the field on the 22nd March. Instead they returned the following day and were able to retrieve the bodies of slain noblemen, including Clarence whose remains were eventually to be interned in Canterbury Cathedral and to bury other dead. They then retreated towards Normandy via Le Mans, evading the pursuing Scots.

For the game I’m adding the opportunity for Salisbury’s archers to arrive and fight – something which may just tip the balance? Their arrival will be decided on a randomised basis. 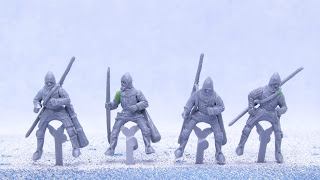 So I need to make some mounted English archers – who’ll then shoot and fight on foot. I’m using the new Perry Agincourt Mounted Knights box again. There are 2 bodies (separate legs and torsos) on each sprue with men wearing padded gambeson and arm options for bows, swords, covered bows, arrow sacks etc. I’ve created some variations by using heads, arms and cut-down torsos from the Perry Agincourt English archers and French foots sprues, also the (smaller) arrow bags and a pair of arms from the WotR Light Cavalry box too. I plan to add a few ‘period correct’ arrow bags from the new box to the saddles, when they’re all painted. 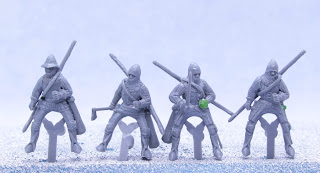 These look great Simon, excellent thought and assembly as is your hallmark !

Are you tempted to do some horses and a horse-holder too? - perhaps after Salute.....

Thanks Stuart - no time for ANYTHING pre salute, but householders would be good - need to scout around for good standing pose horses - any ideas please??
Cheers

I've pondered this subject at length for my own unit of mounted archers. The options are to either chop up the plastic horses to achieve standing poses or get metal ones - there's some standing horses in the Perry crusades and ECW ranges which can be converted but it'd be costly and they'd be a bit smaller.


That's why I still haven't done anything !

It’s really a nice and helpful piece of info. I am glad that you shared this useful information with us. Please keep us up to date like this. Thanks for sharing. confederate service files