Apologies for the delay in getting some words and pictures together from the Salute game.

So Lewis King and I set up on the Friday evening and spent a very pleasant evening eating and drinking, and chatting about the hobby with others staying at the hotel.
Regrettably other members of the Lance and longbow Society who were going to join us to play the game couldn't make it due to illness. We did have Ian with us for the afternoon, who led a wing of the Franco-Scots. The game ran well with Lion Rampant. We basically used the rules as they are, jaltoigh we classed Clarence and his mounted knights as "Great" - this was to ensure that he attacked any enemy in charge distance and so reflect his recklessness on the day and to avoid him hanging about and waiting for Salisbury with his longbowmen arriving.

All units were treated as they would be in the rules, we just ignored the limit of 12 figures per unit. We used counters to reflect the rising numbers of casualties and removed a dice per casualty, to better reflect the growing injuries and fatigue in a unit. The Scots archers defending the bridge were a small unit.

So this is how it transpired. Clarence headed for the Pont Godeau over the Couasnon river and quickly dealt with the Scots archers. In hindsight we should have stiffened their resistance with some men at arms, to reflect the close melee that the contemporary records refer to. At this point the Franco_scots on the hill and in the town could be activated. 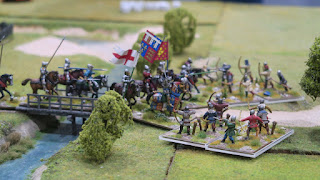 All the other English knights also followed over the bridge. At this point we started to dice for the arrival of Salisbury with his mounted archers, but they would take a few more tunes before they appeared. Clarence they headed for the town (in historic fashion) and attacked and defeated a unit of crossbowmen, whilst taking few casualties.

On the Scots left, the crossbowmen and men at arms were reluctant to advance and shoot - they repeatedly failed their activation phases. This allowed the other English knights to charge Scots men at arms - a close melee took place over a number of turns, with the Scots being pushed back. However the English knights, still fighting on horse, were starting to accumulate casualties. At this point the English mounted archers under Salisbury appeared on the table and made for the river. 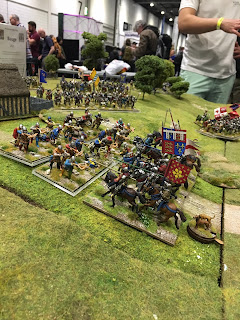 Clarence continued his heroic attack, forcing his way into the centre of Vieil-Bauge and defeating a unit of Scots spearmen. At this point we ran out of time and our energy was sapped too - plus some shopping was calling us! 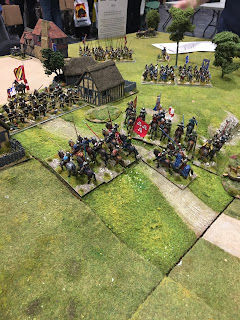 Many thanks for all those who came along and were very generous in their feedback on the game or who wanted to know more about a battle which seems to be relatively unknown - the English being good at hiding their defeats under their bushel! 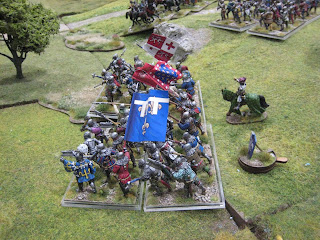 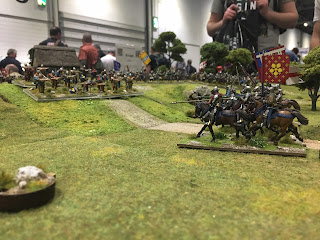 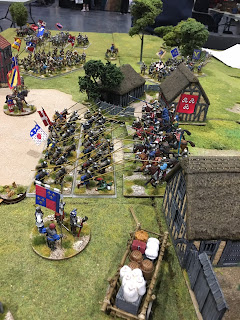 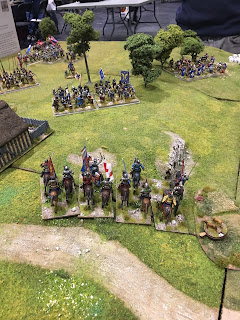 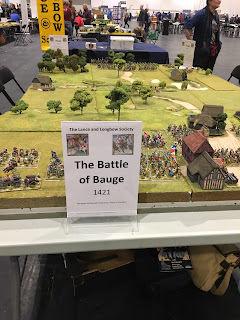 We hope to revisit this at Partizan show, Newark, in May - with some minor adjustments to the terrain and maybe the Scots.

Great looking game, both the figures and the terrain.

Spectacular and superb, what a great pleasure!

T'was a excellent looking game. Well done to all involved!

Great game with so many beautifully painted miniatures and buildings! Great quality in every detail. It was awesome to see it (and you!) in person. /Mattias

Superb looking game Simon, it's always great to see your collection in action.

I might nick the idea of using the dogs as a casualty base off you!

It was an excellent looking game, well done all round!
Best Iain

Useful article, thank you for sharing the article!!!

Just found this bit of film by Wargames Illustrated!
https://www.youtube.com/watch?v=6GSVyWv8g4M

Excellent beat ! I would like to apprentice while you amend your web site, how could i subscribe for a blog website? The account aided me a acceptable deal. I had been tiny bit acquainted of this your broadcast provided bright clear concept. national archives civil war