Some more progress - Étienne de Vignolles and another kastenbrust.

Etienne de Vignolles appears to be the primary leader of the French mounted vanguard at the battle of Patay. In the previous posting, I showed the horse conversion for this figure and the rider is just a standard Perry knight from the Agincourt plastics box. The caparison is hand-painted, in an attempt to match it to the printed flag. 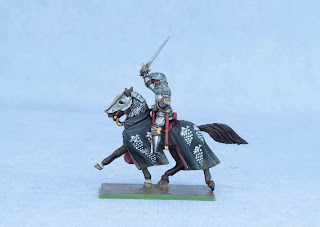 Vignolles acquired the knickname of La Hire at some point. One explanation for his nickname of La Hire would be that the English had nicknamed him "the Hire-God" (Ira Dei: the wrath of God). Alternatively, his name may simply come from the French "hedgehog" because he had a prickly disposition.

He joined Charles VII in 1418, when the English army invaded France. Although not a noble, La Hire was regarded a very capable military leader as well as an accomplished rider. Three years later, in 1421 he fought at the Battle of Baugé.  He was a close comrade of Joan of Arc and an important leader in winning the victories against the English in 1429. 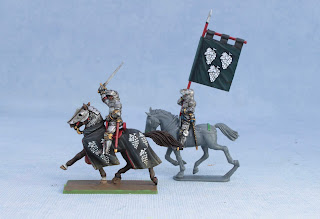 I've started his banner bearer and the flag is from the excellent GMB Designs. They'll be based up with another knight alongside them.

When looking for references for the kastenbrust I found this image of St George from Cologne museum and its dated circa 1430. So I have attempted to replicate it by adding green stuff breastplate and the 3 overlaping plates at the shoulders - not unlike a small crinnet worn by horses at this time. 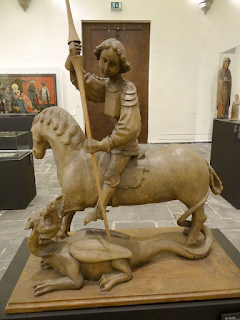 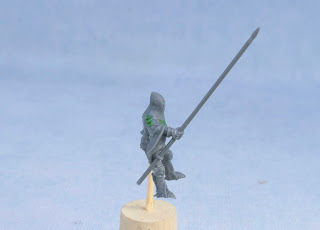 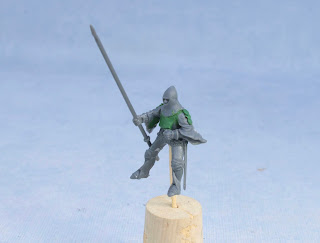 I think this will do for now on germanic breastplate conversions!

PS - not sure why the fonts have gone awry on this post - I'll try and come back and fix it....

It's a terrific pair of figures. Congratulations on a job expertly done
Stephen


Turned out well, nice to see it come together.