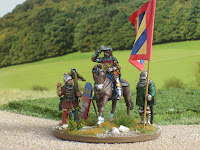 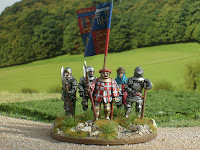 Fantastic stuff!! I love these vignettes..... full of the right kind of character and bold enough to attract attention.

I think we are in line for having a very colourfull and interesting table top Simon.

On which site have you found the Banner of Comte d'Aumale ?

Very bice again. I applaude you just for acquiring these great models and thus saving them for public re-appearance. What a nice amalgamation. ;-)

Thanks for the comments guys - the flag is from Krisspill site http://www.krigsspil.dk/download/download_3.html
Flags range from excellent (see the Burgundian & HYW) to rather disappointing (eg Swiss.
Cheers
Simon.