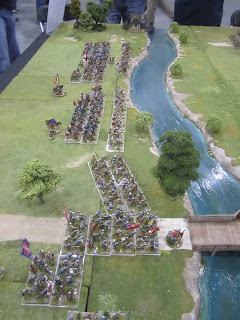 The English contingents advance towards the river in the first moves.

The initial set-up reflected the assumed pre-battle positions of the two armies,  following the three hour stand-off that occurred on 31 July 1423. The English and Burgundians were located nearest to the river bank, with the French having arrayed from their palisaded encampment. It’s most likely that Buchan would have posted a force to defend the river crossing, however to speed up the game I conveniently ignored this and the bridge was undefended. The English forces deployed with Lord Willoughby in the van opposite the bridge, Antonie de Toulongeon the Marshal of Burgundy in the main ‘battle’ and the earl of Salisbury on the left wing with the rearward contingent (who as the overall commander had the largest force). The French were slightly off-set, to be further from the bridge, with the earl of Buchan in the van (with the larger contingent) and two smaller French contingents in the main and rear battles (who in the actual engagement included Italian and Aragonese mercenaries).

The English were given the initiative for the first move and Lord Willoughby duly advanced on the bridge, in the hope that a swift crossing could potentially out-flank the French left wing. Salisbury and de Toulongeon brought up their respective longbows and crossbows to the river’s edge to fire at long-range. This fire prompted the Scots archers and French crossbowmen to move forward and engage in a duel, which resulted in both sides taking some casualties. 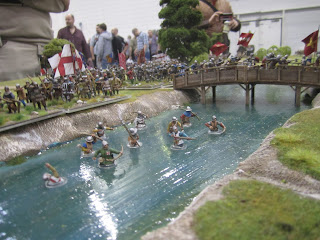 Lord Willoughby's contingent cross the bridge, with longbowmen wading over in support.

Lord Willoughby’s contingent followed their historical predecessors and crossed the Yonne – men at arms using the bridge with covering fire from their longbowmwen. However at this point their progress slowed, I think as the French won most of the initiatives for the following turns of play. The French advanced to counter the English attack and a melee ensured, which blocked all aspirations that Willoughby had of creating a flank attack. A protracted series of hand to hand fighting continued between the bridge and the walls of Cravant. 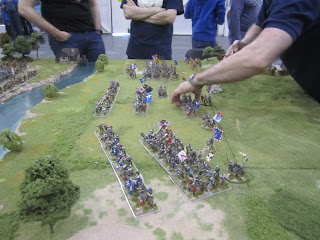 The French advance in response to Willoughby's attack. 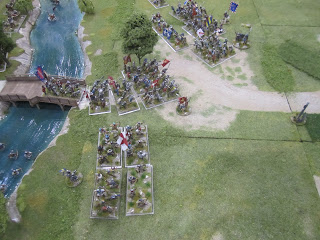 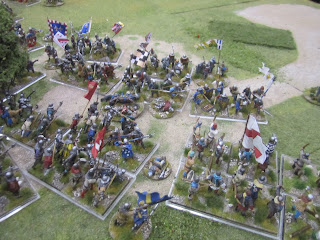 The English attack and ensuing melee.

In response the French and Scots units advanced towards the river,, manoeuvring to align themselves with the English and Burgundian ‘battles’. This was despite fear of an attack in the flank or rear from Lord Chastallus, foraying out of the besieged town, as occurred in 1423. Although we gave Chastallus a modest force, this event was diced for once the French moved forwards, but on the day they were a ‘no show’ and remained cowering within the safety of the town walls. 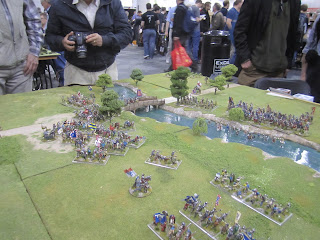 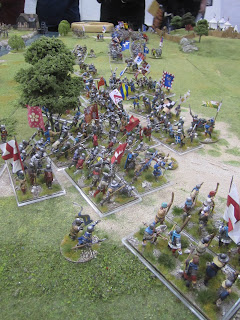 The view from the Franco-Scots side.

The other allied contingents then crossed the river to attack – Salisbury and the Marshall of Burgundy’s crossbow units crossing the river – which was deemed to be fordable at all points as it was high summer and only waist deep waters – within a turn of each other, despite crossbow and handgun fire from the Scots and French. Initial fighting ensued between Salisbury and Buchan – including a rumour that Salisbury himself had been killed. The game was therefore interestingly poised when we ran out of both time and collective energy. The melee between Salisbury and Buchan would probably have been the key to deciding the outcome. 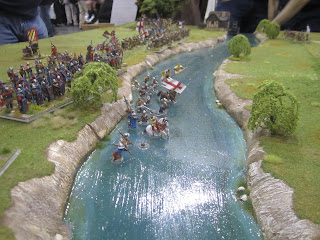 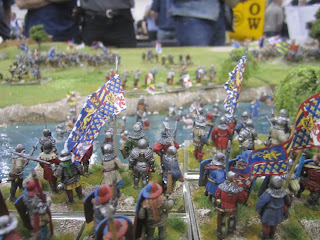 The Burgundians cross the river.

Overall I think that the game played out well – we certainly managed to play more turns than we had for the Verneuil game of 2011. The layout seemed to look Ok and included all the known elements of the battle. The Impetus rules were also fit for purpose – although losing melees from a flank attack does prove fatal for the losing unit. In all, the English probably didn’t win enough of the initiative dice throws at the start of each turn, in order to cross the river swiftly enough and benefit from a speedy attack – as they had in 1423. 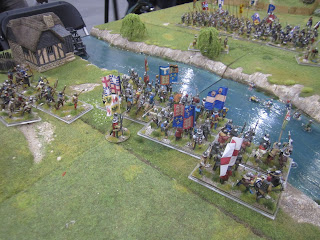 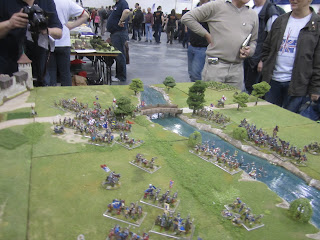 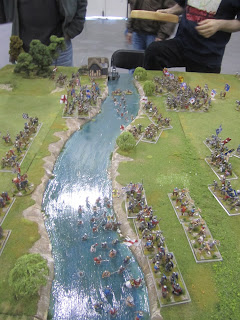 The positions towards the end of play.

My thanks once again to David Lanchester and the Lance and Longbow Society for the opportunity to put on the game and to all of the players on the day. 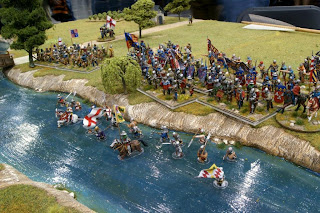 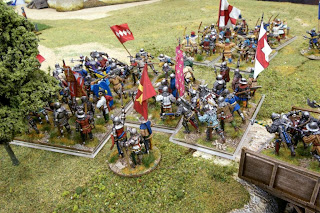 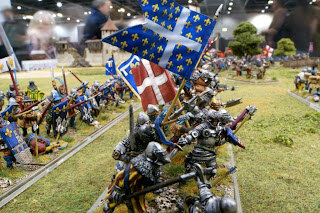 Some extra pics of the game taken by Joe Dever.

Amazing battle, thanks for the report and photos. Your figures wading into the river are fantastic and add so much to the suspension-of-disbelief. Great work, I wish I could have seen this in person.

Love the men crossing the river, especially the mounted ones, realy splendid!

Such a fantastic set up, I stopped a couple of times last Saturday to admire it.The figures and terrain look superb, I think the feel of the era is captured perfectly.

It was a stunning game, Simon. Easily one of the very best at the show. The colours of the terrain were, for me, the highlight - it really looked like France in the summer!

Really impressed with the looks! Also loved these on all the Salute reports!

Looks amazing, can't believe I missed the game at Salute!!!

Fantastic shots of the game thanks for placing them up

Lovely painted figures and terrain. Those waders are brilliantly done.

It was fantastic to see the table in the flesh, everything about it was our hobby at its very best.
Sorry we didn't get to speak but on the couple of occassions I came around you were deep in conversation.
Cheers,
Pat.

That is a beutiful set up love it!!!

supurb mate, would love to play that game!