I’m starting to build some Perry Miniatures mounted knights for my HYW collection. The first are for a Battle of Bauge 1421 demo game at Salute – on which they’ll be more in later posts. So they’ll have an English look, but still be sufficiently generic to be used in other battles (as French).

My starting point is to assemble the horses. The horse armour for these obviously reflects the 1400-1430 period. Aside from the horse barding, contemporary pictures show chamfrons, protection for the horse’s head (sometimes referred to as shaffrons, particularly by the New York Metropolitan Museum I’ve noticed) and short crinnets, a series of small overlapping plates at the top of the horse's neck presumably to protect it from opponent’s wayward sword blows and sometimes worn with mail.

The box comes with two chamfron-protected horse heads. One is modelled on images in The British Library’s ‘Book of the Queen’ by Christine des Pisan (Harley 4331), a French manuscript of circa 1410 (see images) and the other I’ve found in an image on Pinterest which annoyingly has no source reference. Other contemporary images show ones in a very similar style to the ‘Warwick Chamfron’ in The Royal Armouries. This is a single piece of steel, with additional large perforated eye, ear nose protections.
To create a little variation, I've done some simple conversions. I’ve added eye and ear protections to the heads provided and also cut down the raised central keel on one of them. 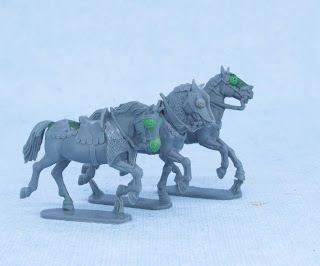 The Perry’s plastic WotR Mounted Men at Arms also have protected horse heads which can be used as they fit the same plastic horse bodies. There is one with a plain chamfron and one which also has crinnet covering the entire neck (this is a little anachronistic, but I'll use it anyway). The others with plumes attached are less useful, as they are of fluted ‘German’ design or have plated neck armour, both only seen in the later part of the century. Again the same easy conversions have been done, using Green Stuff and ProCreate to add protection, pierced by a needle for the viewing/breathing holes. I’ve also extended the flared nose area to try and create a Warwick Chamfron style. 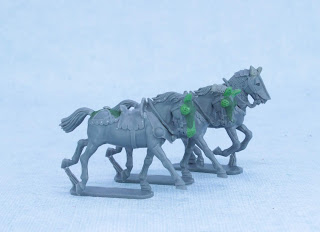 All straightforward stuff which will add a little visual variation as I plan to use this protection on about half of the mounts.

Sounds like a great project, with excellent figures. One that I may visit someday.

A great start to the unit and some excellent background research as ever. Have you given your blog a face lift too? it looks different - or am I late to the party?

Looking forward to seeing the finished result and glad to see this collection getting a return visit with these new figures.

great work mate, be copying it!