French Knights for Patay (I)

There's life in the old blog yet!

I recently had the opportunity to join other 'Bodkins' and replay the Battle of Crecy as a demo game at Partizan show. Apart from the joy of gaming and meeting folk again after 18 months of lockdowns, it reignited my enthusiasm to do more to my HYW collection. I'd made up several perry plastic Mounted Agincourt Knights for the Bauge game, but wanted to do more of them. So my winter project will be to create sufficient French knights to refight the Battle of Patay 1429 - a key turning point in the recapture of English-held territories by the French. 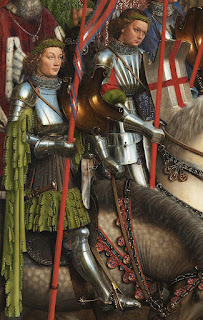 So the current plan is to create at least 10 bases of knights, which can be added to the 'agnostic' bases I have done already.

The first conversions for these are using horses from V and V Miniatures, which wear caparisons. Horses with caparisons (cloth coverings) are shown in early 15th century illustrations. However it is probably unlikely that they were worn in battle at this time. They are a useful artistic device to show leaders in imagery of the time - and this is exactly how I'm going to use them for some of the leaders on the gaming table.

I purchased a few of the horse models direct from A&A in Russia in the first lockdown period. They are resin models and are a remarkably close fit to older Citadel style horses. So thankfully the overall size fit with the Perry plastics is pretty good. I could use the assembled horse bodies and easily attach a Perry head instead of those provided which really relate to the Crusading era. The riders just needed a little more width in the gait of their legs - easily shaved off with a scalpel - to fit the horses OK. 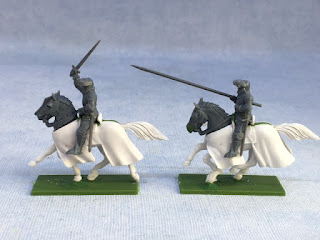 The second conversions are to add a few knights wearing kastenbrust cuirass. For a battle set in 1429, it is just possible that the kastenbrust style of armour was starting to make an appearance. Although most of the illustrations depicting this style are dated from c1430-1460 and derive from Germany or Flanders, it gives me an excuse to add a bit more visual variety and create some unique figures. I recently visited the restored Van Eyck 'Lamb of God' altar in Ghent, dated to 1432, which has the Knights of Christ all wearing kastenbrust, so we're close enough on the dating for me to be happy with attempting these figures. 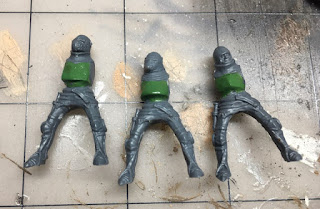 I've added the angular cuirass with green stuff and I'm happy with the results. However when I attached the riders left arms, those holding the horse reins, and they pretty much cover up all the putty work! But I know (...and you dear reader also know) that they are there. Consequently I've selected right arms which try to avoid covering up all my work.  Next steps will be to paint all of the new figures, before picking up some more Perry boxes at Salute. 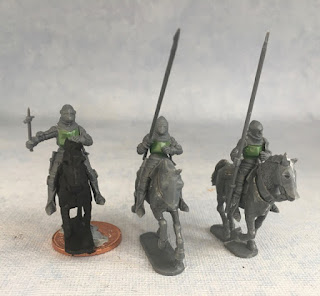 All the best, Simon

Ooooh I'm going to enjoy seeing how this works out.

Glad you are back

Patay is my is THE period of the Hundred years War for me.
I can't wait

I have been looking for caparisonned alternative to Perry horses and was considering Fireforge ones. V&V one look perfect and seem to fit perfectly. Thx for the info.

I really like your blog and you shared the whole idea very well. And beautifully written, read by the soul! Thanks for sharing. Automatic Clicker

I am looking forward to seeing how these develop Simon, I love the fact you have chosen to demonstrate that particular style of breast plate on the miniatures.

A welcome return act after the intermission Simon 😃. Looking forward to seeing how these turn out.

Short Bedtime English Stories is a free app that gathers a lot of free english stories collection, and the interface design is simple. After opening, you can select the storybook you want to read, quickly scan at least more than 30 categories, and there are short stories (Short Stories) , Animal Stories, Classic Stories, Bedtime Stories, Kid Stories, and english stories .