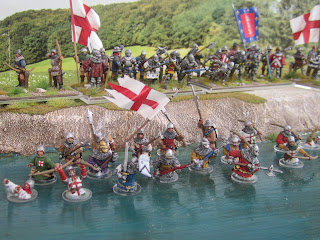 My last planned posting before the Cravant game at Salute. The critical tactical decision of the battle in 1423 was the English attack across the river Yonne, which separated the armies. The English waded through waist high waters, under fire from French crossbows and Scots archers, across a distance of about 50 metres (based on today's river at the likely location of the battle) to the other bank. To represent this I’ve created some river crossing figures – although they may only be on the table for one phase of movement!

They are mostly cut-down spare Perry figures from the Hundred Years War range, plus some Plastic Perry Wars of the Roses figures for the archers – the latter are slightly anachronistic but much easier the convert; I think I’ve blunted an Xacto saw blade slicing through all the metals. There are a few casualty/drowning figures too. 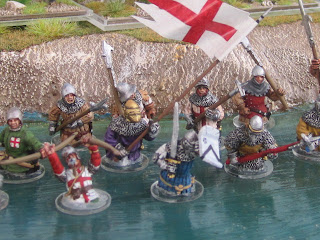 All are mounted on round clear plastic bases, purchased from Oshiro Model Terrain, using a large blob of epoxy glue to try and recreate the broken river surface around their bodies when it dries. Most have been painted in haste to meet the deadline for the game. These are a sample of those done – I’ll post more close-ups after the game. I’m not sure if they’ll get out onto a wargames table again, unless it’s another refight of Cravant, as I’m unaware of another HYW engagement when troops crossed a river to engage the enemy? 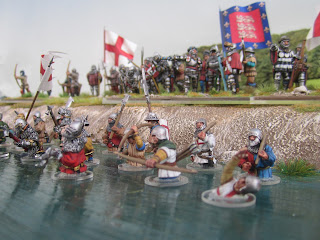 Here's a couple of the cut-down figures as works of progress, pre painting. 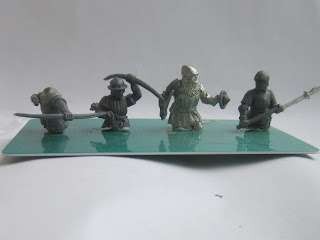 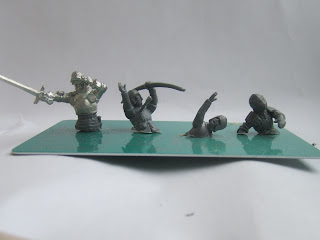 Now time to pack everything up. Cravant demo game and the Lance and Longbow stand is on tables GG 14 / GH 14 – please come along if you can on Saturday. For those not attending I plan to put up some pictures here next week.

Now, that is so cool!
Great idea and great execution. Things like those figures (for one movement phase only) is what takes a display game to that extra level. And with your's starting at a very high level indeed the result will be spectacular.
Wished I could have been there to see it in person.
best regards,
Mattias

Really a good job... Thanks for this idea and how you achieved it !

Good luck with the demo game, promise to take a bunch of pictures :)

inspiring stuff Simon, it's been a privilege to watch all of your preparation for this and i'm very much excited for you. Hope it all goes well and your vignettes and terrain get some well deserved credit.

I'll look forward to the photographs.

Have a good day

These look great - a cool idea, and you've pulled it off well.

Can't wait to see more pics... boy I really missed something over the weekend!!