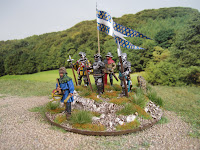 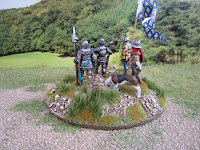 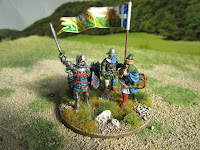 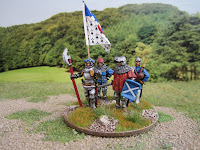 Just completed some command stands for Verneuil game, and for future use in other engagements. Featured are a French high command group, the duke of Alencon and the earl of Douglas.
The French command group with royal banner are all figures painted by Oliver James (the left and right hand ones being one of his conversions I believe), with the exception of the musician and the hound that I've painted up. They stand on some high ground to view the Anglo-Norman forces before battle begins. The wayside shrine is an old, out-of-production casting from the Cry Havoc range (I think) that I've held onto for years.

The duke of Alencon was one of the Armagnac commanders at Verneuil, who was the young son of the duke who'd been killed at Agincourt. He was wounded and captured and freed in 1429, after payment of a substantial ransom, only to continue fighting the English as one of the commanders alongside Jean of Arc. For those of you who know their heraldry, don't look too closely at the figure I've used as his tabard and shield don't bear Alencon arms... but it's just between me and you... the others won't know! Did a quickie headswop on the musician, replacing it with one of those nice hats from the first Perry plastics box. Flag is Little Big Men designs.
Archibald, the 4th earl of Douglas was one of the captains of the large Scottish battle and lost his life on the day in among the high number of Scottish casualties that were suffered in the final route. I've made a slight amend to the figure by exchanging his poleaxe for a more 'typically Scottish' axe, and the bagpiper is a tad more ready for the fray from the wearing of a helmet (a plastic sallet from the Perry WotR box), rather than the soft hat he was cast with (which is tucked away for a future conversion). Flag from GMB Designs

The basing on these is most satisfying; well thought out and complementry spacing. I my have to copy the notion at some point with my own forces!

With all these 'extras' I really think that our demo game may be something to remember.

Beautiful brushwork and composition. Can't wait to see the game in action at Salute!