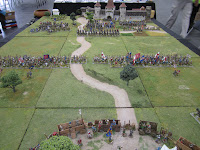 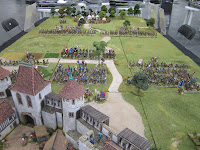 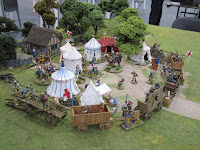 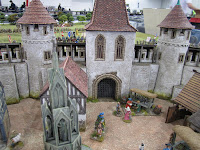 Well, we managed to put the Verneuil game on at Salute on Saturday.

Despite the facts that: Darrell Hindley and I had liaised by email and phone but never met until an hour before the show opened; the terrain and figures had never been laid out beforehand as a dry-run; that I had miscalculated my metric to imperial conversions and so we couldn't fit the fourth terrain tiles across the width of the table and had to live with a narrower terrain layout; that all the players from the Lance & Longbow Society hadn't previously met and that everyone forgot to bring any dice with them! Despite all of this, we chatted...we played..we chatted some more....and amazingly...we won "best demonstration game at Salute 2011"!!!

The win was a real surprise to all of us and topped off a great day. It was a thoroughly enjoyable and rewarding experience, although an immensely tiring one. The specific logistical procedures at ExCel means that the set-up and take-away times are very protracted. This meant a Friday afternoon arrival to set-up and an overnight stop for me with all the terrain and many of the figures. The evening stay was compensated for however by the generous invitation to join the folks from Perrys, Rendera and Immortal Minis for dinner.

I did manage to see the proverbial tip of the iceberg of the other very attractive games. At the trade stands I only spent some 'loose change', which was a positive and the plastic was only called for to pay for a subscription to the forthcoming 'Medieval Warfare' magazine, which I'm looking forward to receiving next month.

There appeared to be a steady flow of interest in the game during the day; lots of questions (particularly on how the town walls had been constructed) and many kind, complimentary words passed on the game. It was good to briefly catch up with familiar faces and to be able to put new faces to names from this blog and other gaming forums. 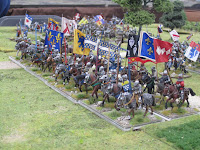 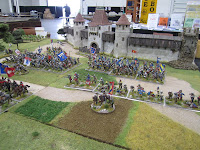 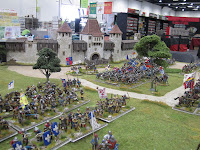 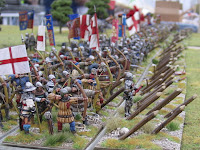 For the game, we set up the alternative scenario, as outlined in Michael Jones' academic article, with the Lombardy mounted men at arms in the centre (rather than on the wings), with their charge being anticipated as the key tactical moment for the battle. Darrell led the French foot, George Moriatis the Lombardians and Nick Palmer took the Scots, while Nigel Cook and I were Bedford and Salisbury respectively. We used basic Impetus rules, which seemed to work well with Darrell, George and Nick's guidance re the finer points (as I'd not played them before). Nigel also acted as our very own 'Jean du Waurin' and kept a chronicle of key events (in his little black book) as the game progressed. Briefly the English decided to stay put in their strong defensive position and take on the force of the cavalry charge. The Lombards initially inflicted casualties, but with some judicous dice rolls the English line held as the charge lost it's impetus (sorry for the pun). The French and Scottish wings of foot, screened by crossbows, gradually advanced. As with the actual battle Narbonne's contingent got ahead of Aumale; although we discovered this was primarily due to everyone overlooking to move the unit whilst Darrell was otherwise engaged around the show! The English longbows failed to make much impression on the advancing Franco-Scots and the game was nicely poised with both sets of the men at arms ready to come to grips, when we ran out of time. I suspect that the greater numbers may have told in favour of the French in the long run?

I hope that the game creates some good publicity for the Lance and Longbow Society and my thanks go to Dave Landchester for allowing us to put the game on, to Darrell for helping with the organisation, his extra figures and the motivation, and to the guys on the day - perhaps we can reprise it again in 2011 at another show?

My personal highlight from Saturday (of the little I saw) were the two '3-up' mounted men at arms by Michael Perry - they look fantastic and here's hoping they make it to the finished stage for the end of this year, as it'll make my wife's life much easier for the Christmas pressie buying . I'm now motivated to try and finish off all the outstanding figures to get my HYW armies completed, before moving on with my Burgundians. 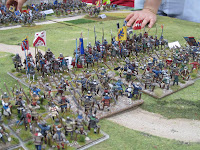 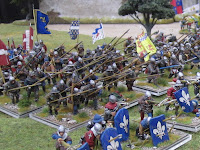 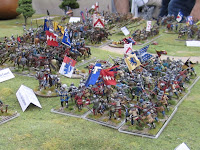 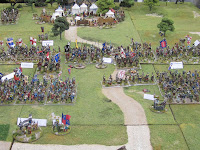 I hope I shall see your project one day. Maybe in France ? ;)

It was a well deserved winner at the show, loved the figures....and that castle!

Wow!!!!
Have followed the progress of this game and the build up of your forces for a few months now - absolutely brilliant. Loving your buildings too - amazing use of the Hudsaon and Allen casts.

I hope you won't mind me asking you to have a look at my blog i've just started - yours has definitely inspired me!

Great write up Simon. I think you have summed things up very nicely.

As discussed for the next outing I think Partizan September would be perfect.

Talk much more about this at a later date.

Still in a bit of shock about winning best demo game; it really wasn't what any of us were expecting!

Congratulation to the "best demonstration game at Salute 2011" Prize !!!

It is realy a stunning gaming board, very impressive and inspiring !!!

No surprise, really. That's a completely gorgeous table which excels in layout, painting and rules. Your attention to detail and period flavour is awesome. So, well deserved.

Excellent photographs Simon, your painting styles are so similar it all looks like one collection, it shouldn't be too hard to game other scenarios of the HYW with what you have and a few extra details.

Great Game! Great advert for the hobby, the period and The Lance & Longbow Society. Well done Simon and all the team.

Very nice indeed. That's the sort of collection I wish I lived closer too so I could have a play.

...I am in near-speechless awe of the customization and paint-job on your Hudson & Allen castle. I've painted two of them myself, both very nicely, IMHO, but yours is just fantastic. I may have to find myself another complete set of that castle in order to copy it as near as possible. I just tracked down John Boadle's site and may have to write and ask some questions. He is obviously an extremely talented man. Thanks for posting your pics!

Congratulations, an outstanding effort all round. Would love to see it in the flesh one day, keep us posted about any possible further outings this year.

Many thanks for all the kind comments. I've been so tired this week, I've not picked up a paintbrush.
Darrell and I are hoping to reprise the game at Partizan show in Newark in September; we'll confirm it when we know.
Simon.

See you at Partizan. I'm not gaming this time but hope to put something AWIish on in the Autumn

One question - what manufacturer makes the pavilions? I do recognise one as the Kleos Medieval Ten for 28mm, but the others?
Thanks,
Mattias
http://northern-wargaming.blogspot.se/