I'm collating pictures of the Agincourt demo game and aiming to add other posts later this week. Here are some photos for those who were not at the show, or otherwise engaged with their own game or retail therapy. 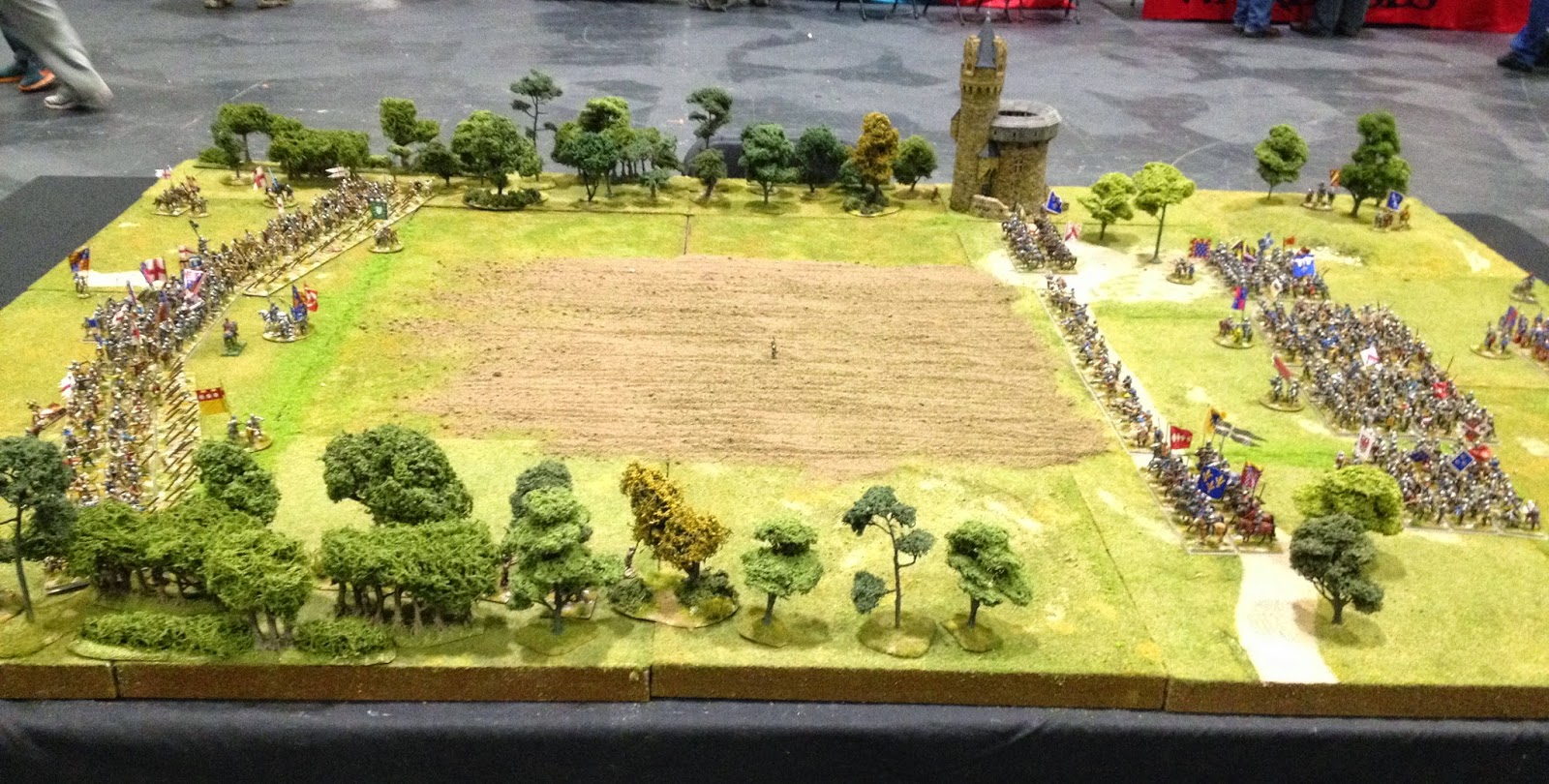 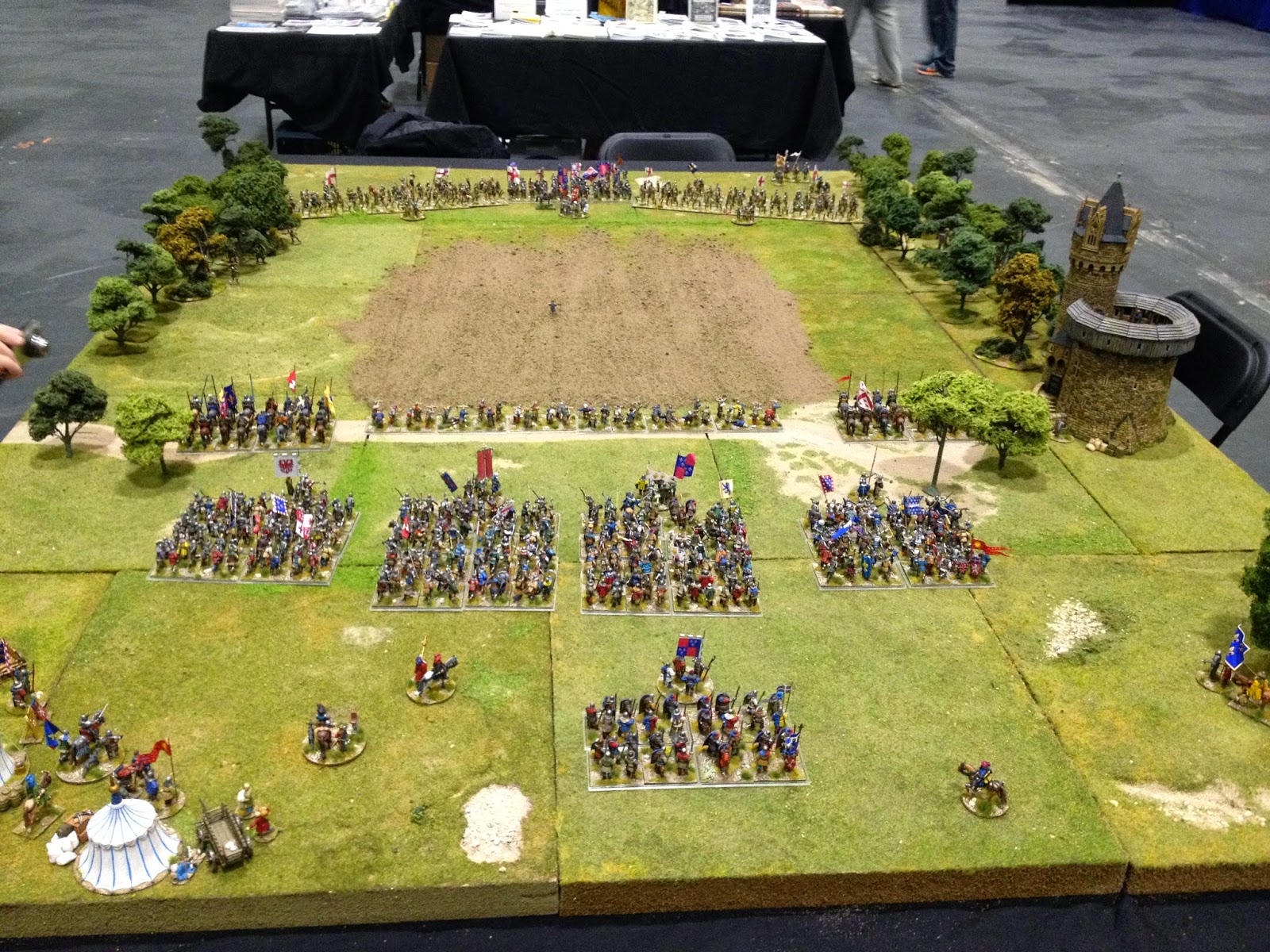 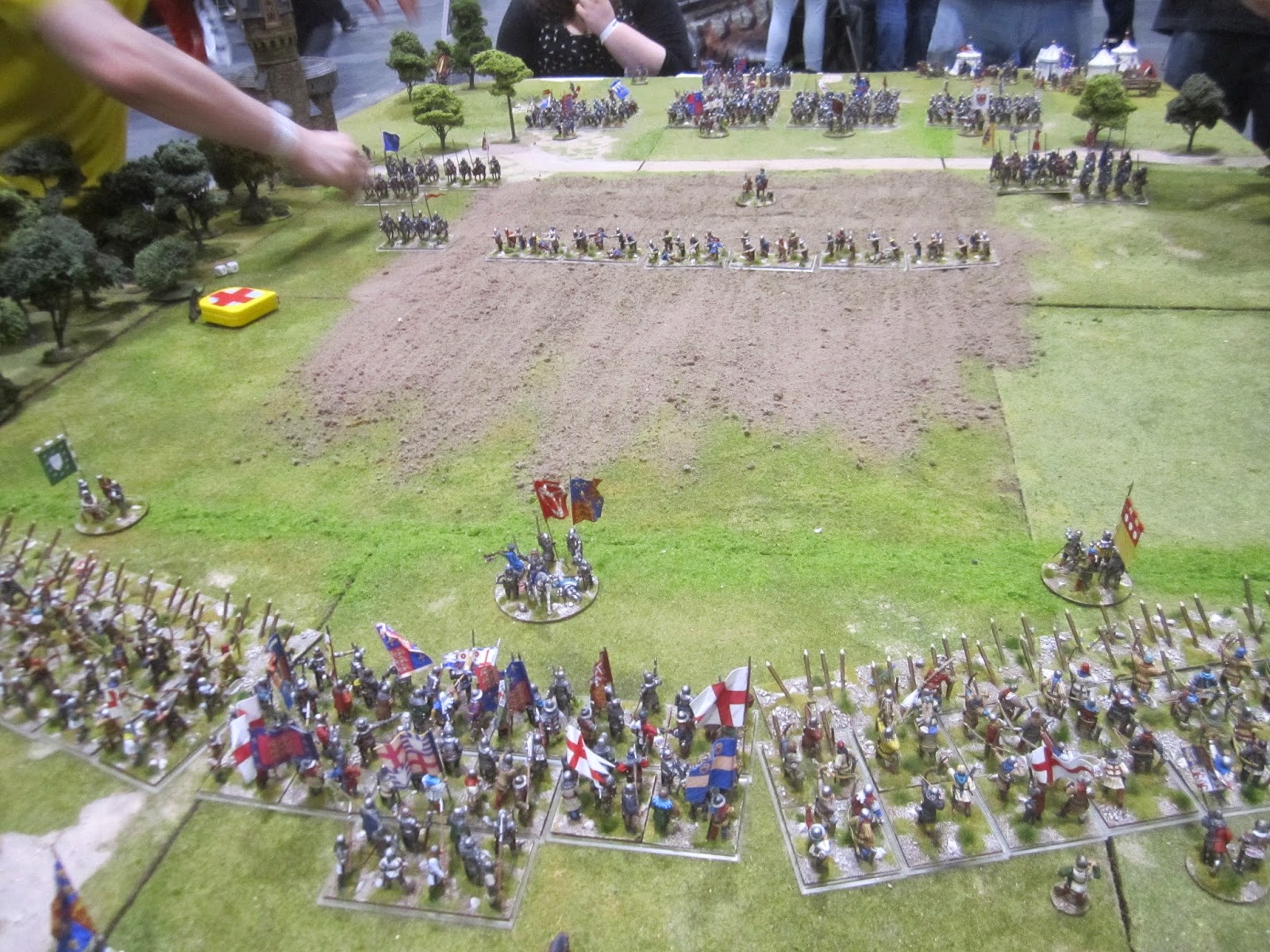 Salute is a very big show and has its own logistics which reflect that - this means a long weekend for travel, set-up, the show and the homeward journey etc. But it was a rewarding one in many ways. Firstly some thanks are in order; to Dave Lanchester for the invitation from the Lance and Longbow Society to bring along my toys, then to those who played the game in a great spirit - Will (umpiring us through Hail Caesar), Clive, Nigel, Stuart and Barry. 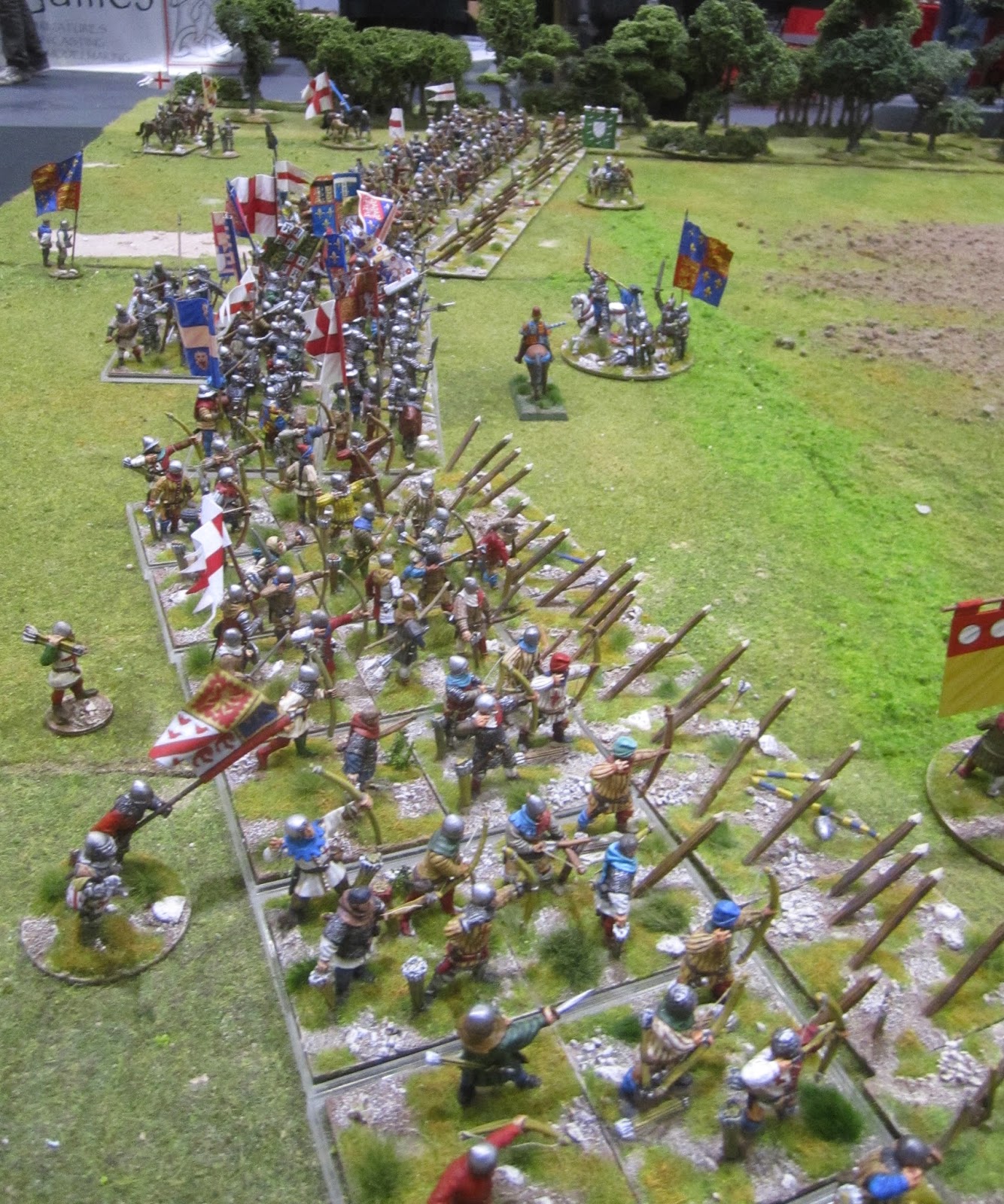 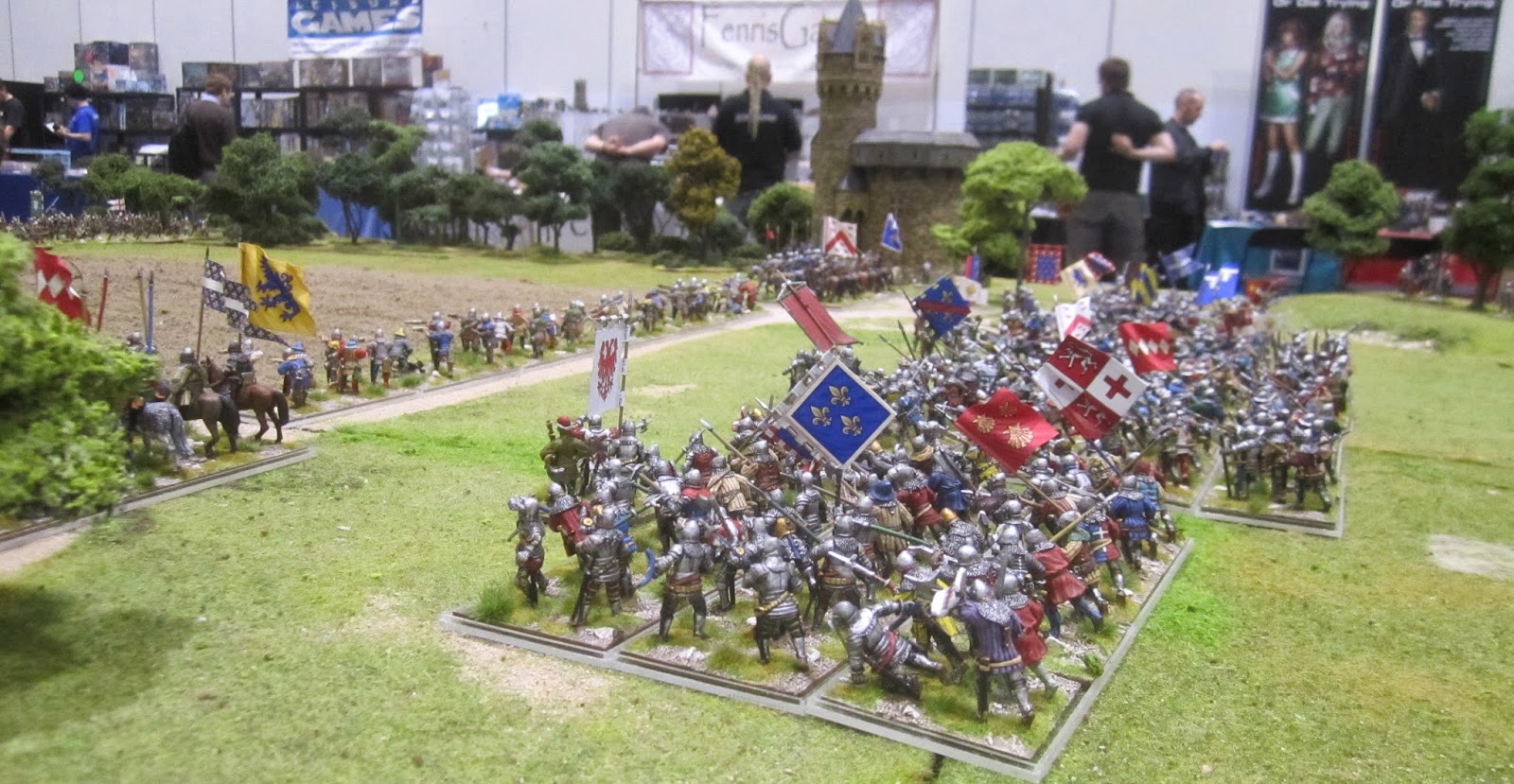 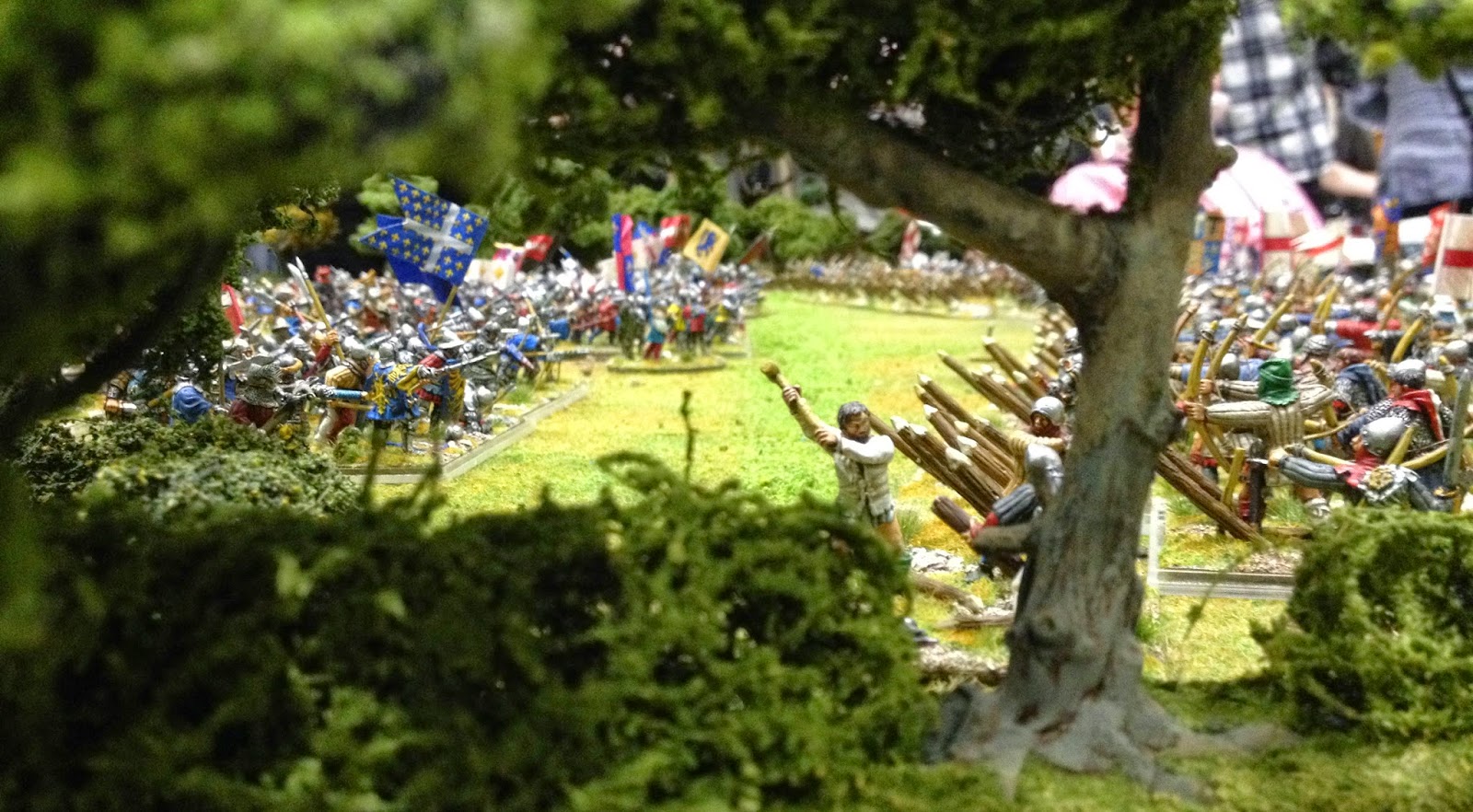 We played out the battle, and although the French initially looked a little light on numbers (but probably close to the recent estimates of Prof Anne Curry, who has them at no more that 25% greater than the English) they achieved a clear victory. The French advanced sluggishly but weathered the arrow storm. The crossbowmen and mounted men at arms sent out first failed to break the English defensive positions and fell back as casualties grew. However the arrival of the French men at arms in some numbers, pushed back the English left wing and despite a protracted melee in the centre, when Henry's battle fought back, that too collapsed and the King and his household took flight, to seek out a boat to re-cross the channel! The English were undoubtedly not helped by some atrociously poor dice throwing by Stuart and I all day long - a factor which can have a big impact with these rules. Perhaps we should have tweaked them to upweight the impact of the longbows - Michael Perry reminded me at the end of the day that they do this when playing WotR games with Hail Ceaser - so next time...? 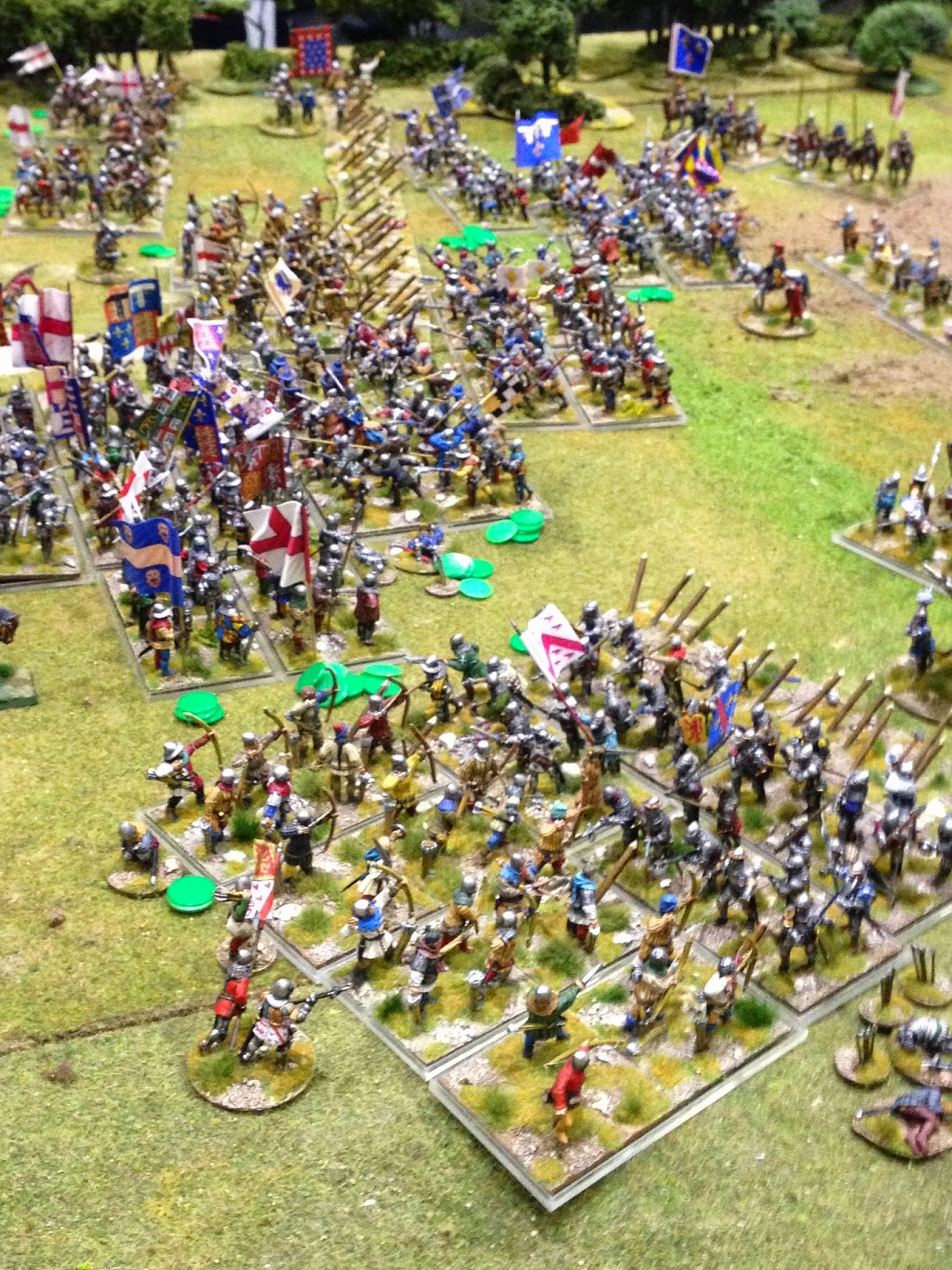 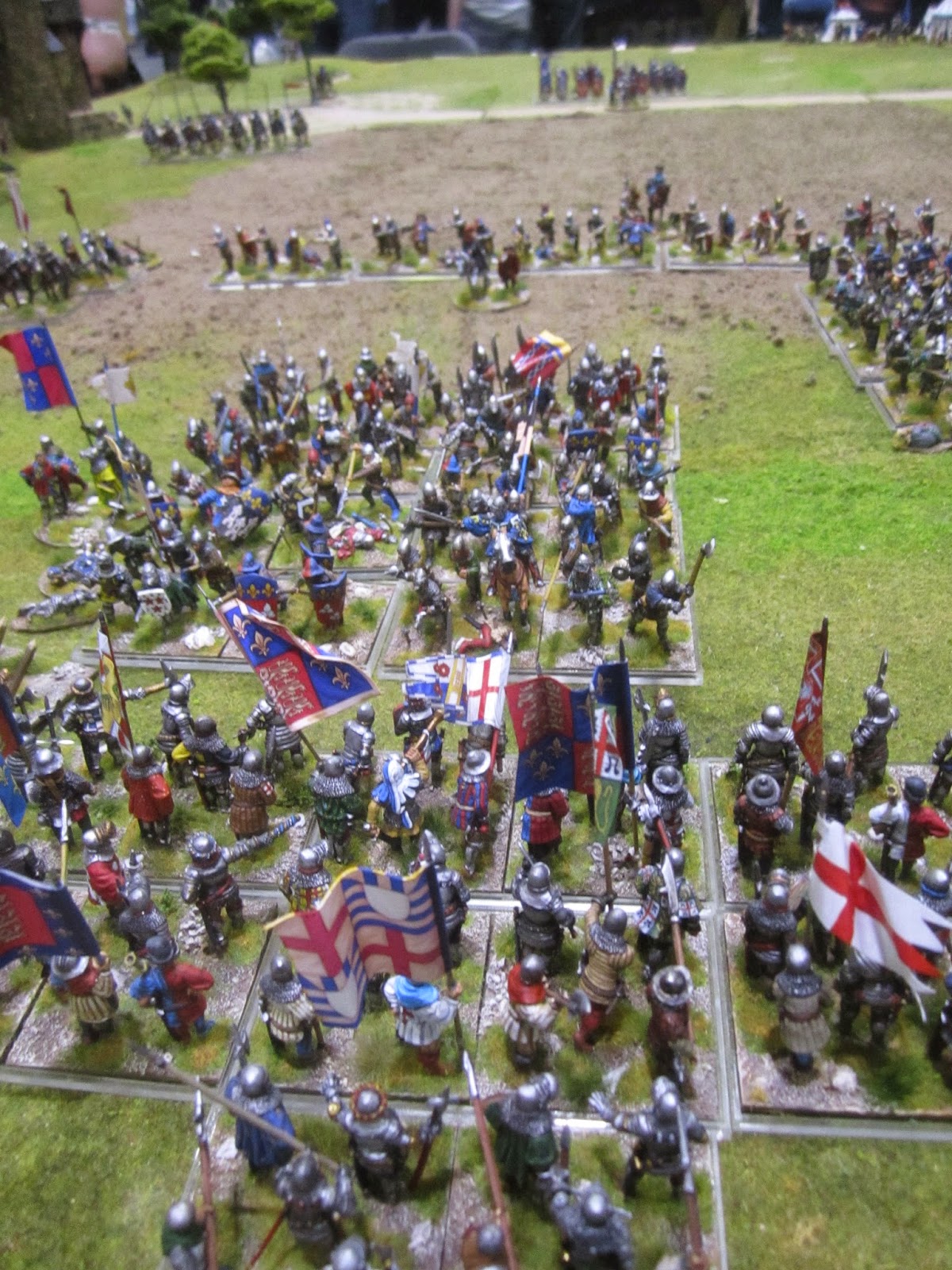 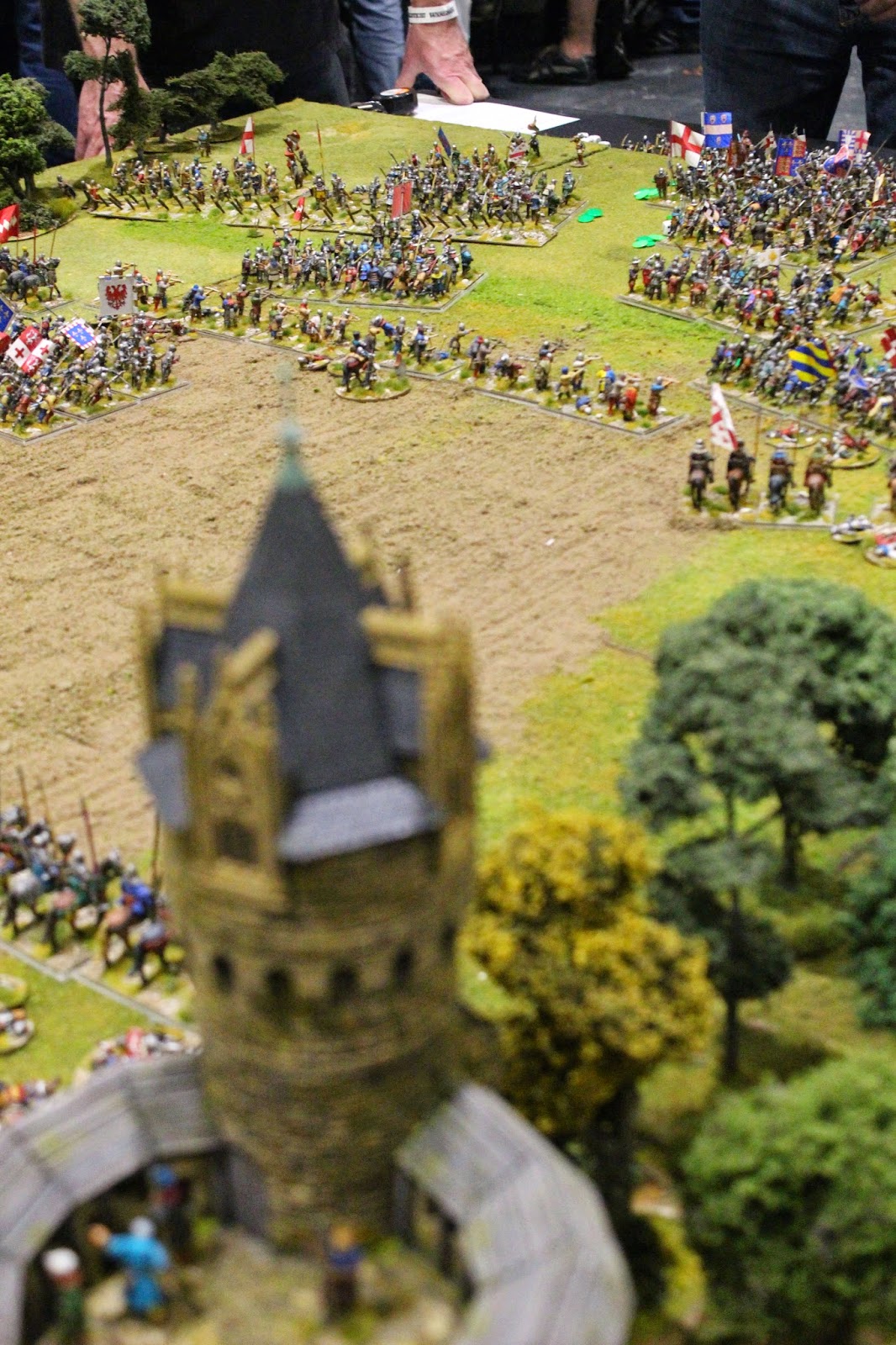 There was a steady and often quite busy volume of visitors to the table all day. We took all the opportunities to answer questions and provide responses on the battle, the state of play, rules, figures etc. It was also great to meet and chat with blog acquaintances, both new and familiar. Thanks to everyone who came to say hello. We tried to present the game as best we could - keeping the dice, coffee cups and ephemera off the table.

At the end of the afternoon, we were all surprised - but extremely chuffed - to be given three awards by the show organisers. The game won Best Historical Game, Best Presentation and was 2nd in the Challenger category. A great finish to a long but rewarding show! 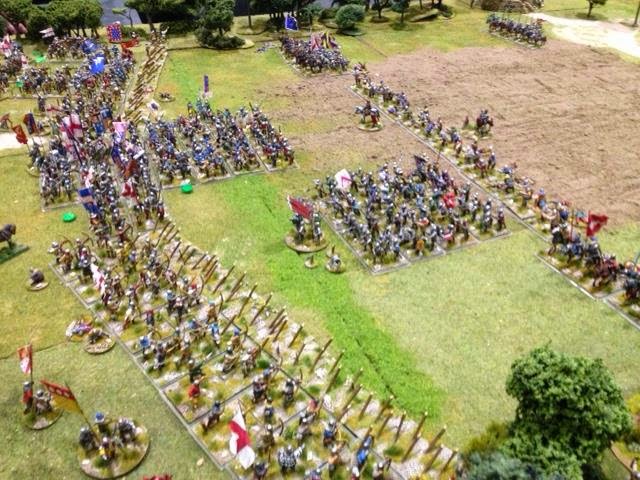 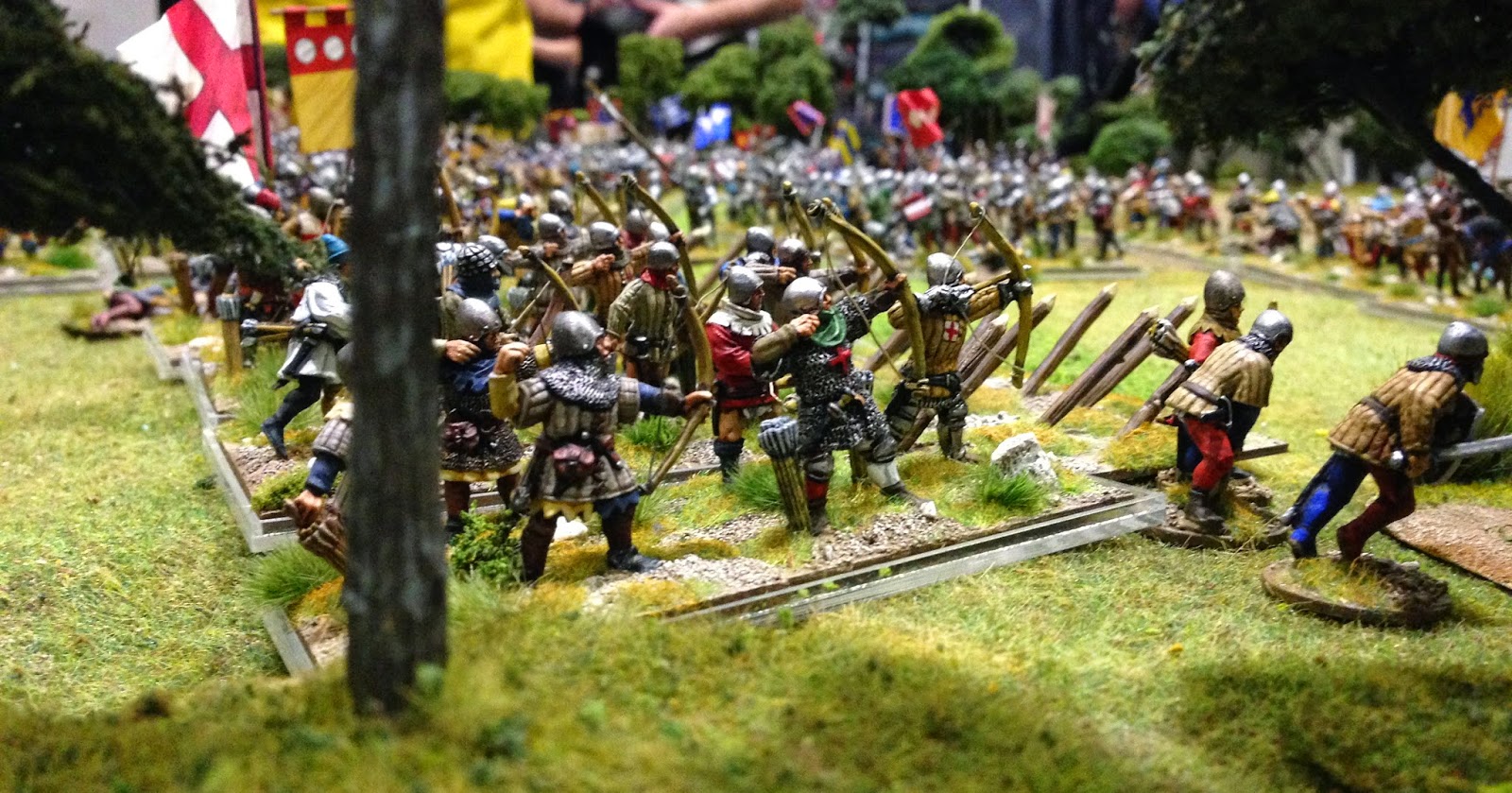 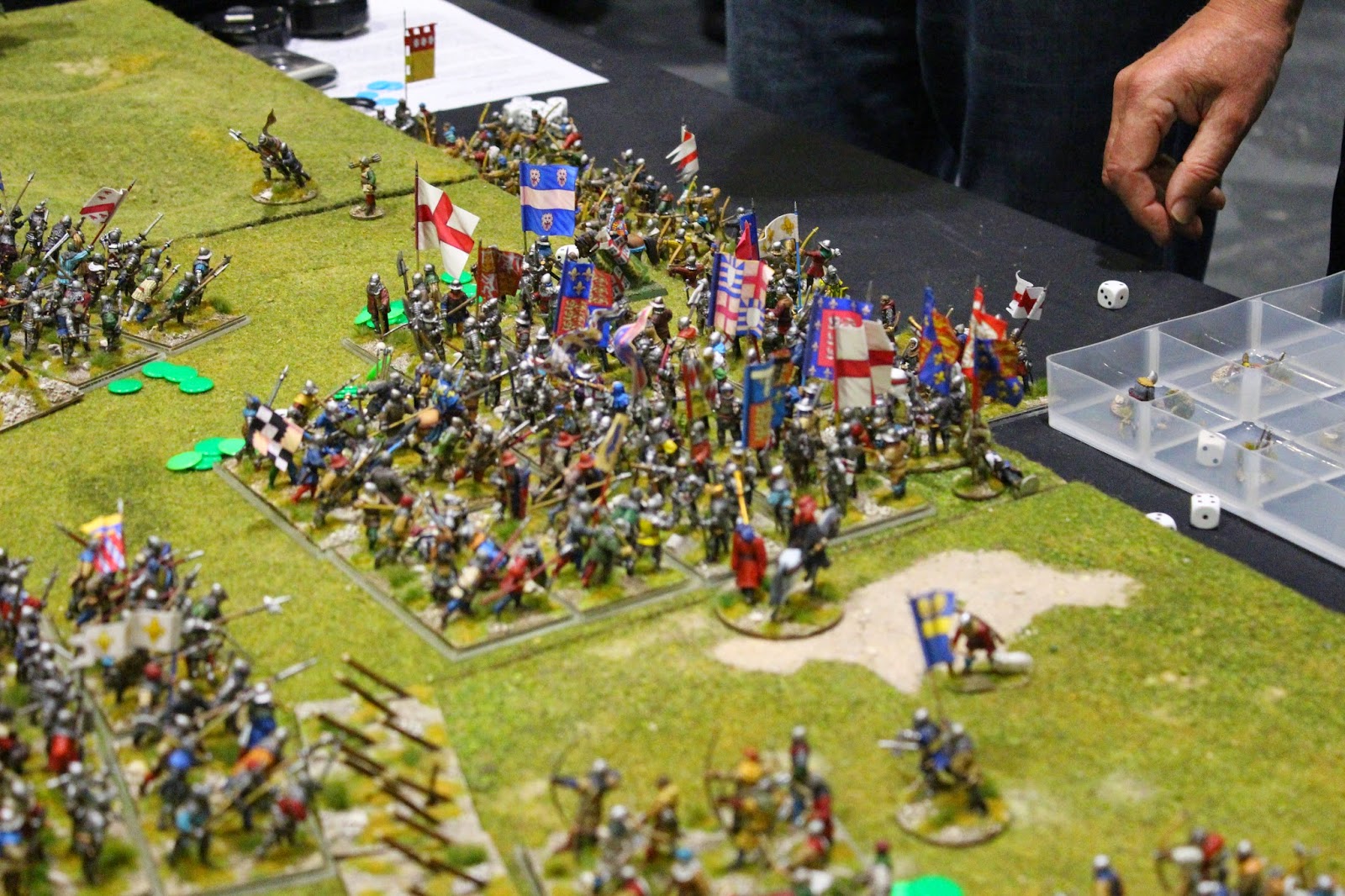 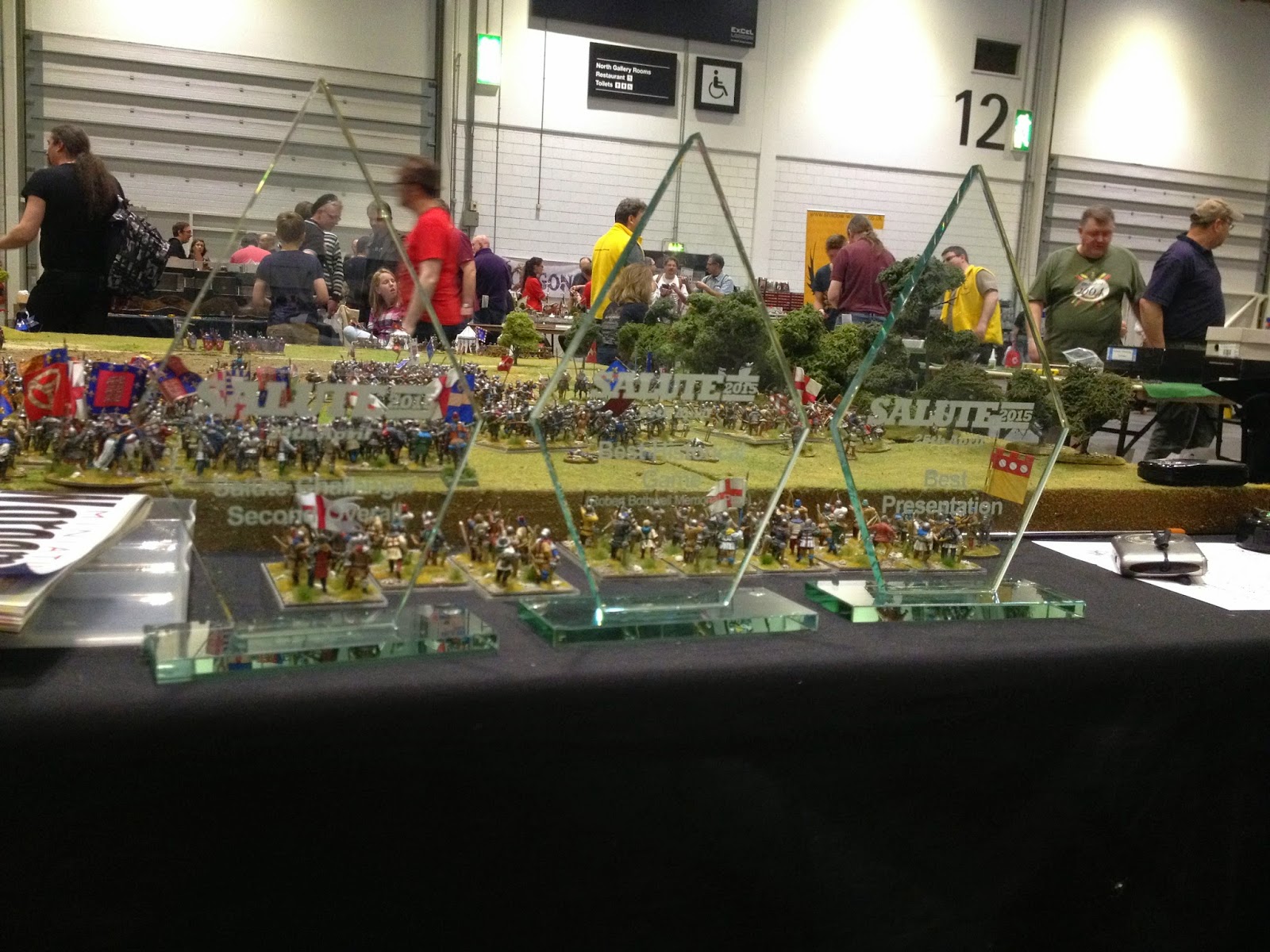 More pics along soon.
Posted by painterman at 12:33

A stunning looking table and congratulations on the awards!

Wonderful looking stuff! Conte onthe awards - they look well waned from this side of the pond.
Cheers, PD

Was very nice to get to say hi to you Simon !

Well done, Simon. The game looked amazing and the awards were well deserved. Sorry not to have seen you - I passed by a couple of times but you must have been doing some retail therapy of your own at the time!

Congrats on the awards...this table is wonderful!

How the hell did I mange to miss this game???? Dammit!

I wax surprised that this didn't make your pics Ray. The eye candy distractions must have been strong to mini this!
Cheers, PD

Beautiful game Simon. So disappointed I couldnt make the show to see it. Love the ploughed field. Is that loose stuff laid over your terrain tiles?

A deserved awards, this is a superb looking medieval array!

Well deserved win by the sounds of it. The images look so good. I came close to taking out a loan to get to Salute this year because of the Agincourt them and I would not have been disappointed. Rules ideas and tweaks forth coming?