Agincourt at Salute pics (II) - Up Close and Personal.

Many thanks for the great comments from the last posting. The build-up for Salute can be long, as is the day itself, but the interest and memory quickly fades - so I thought I'd put up some additional photos sooner than later. 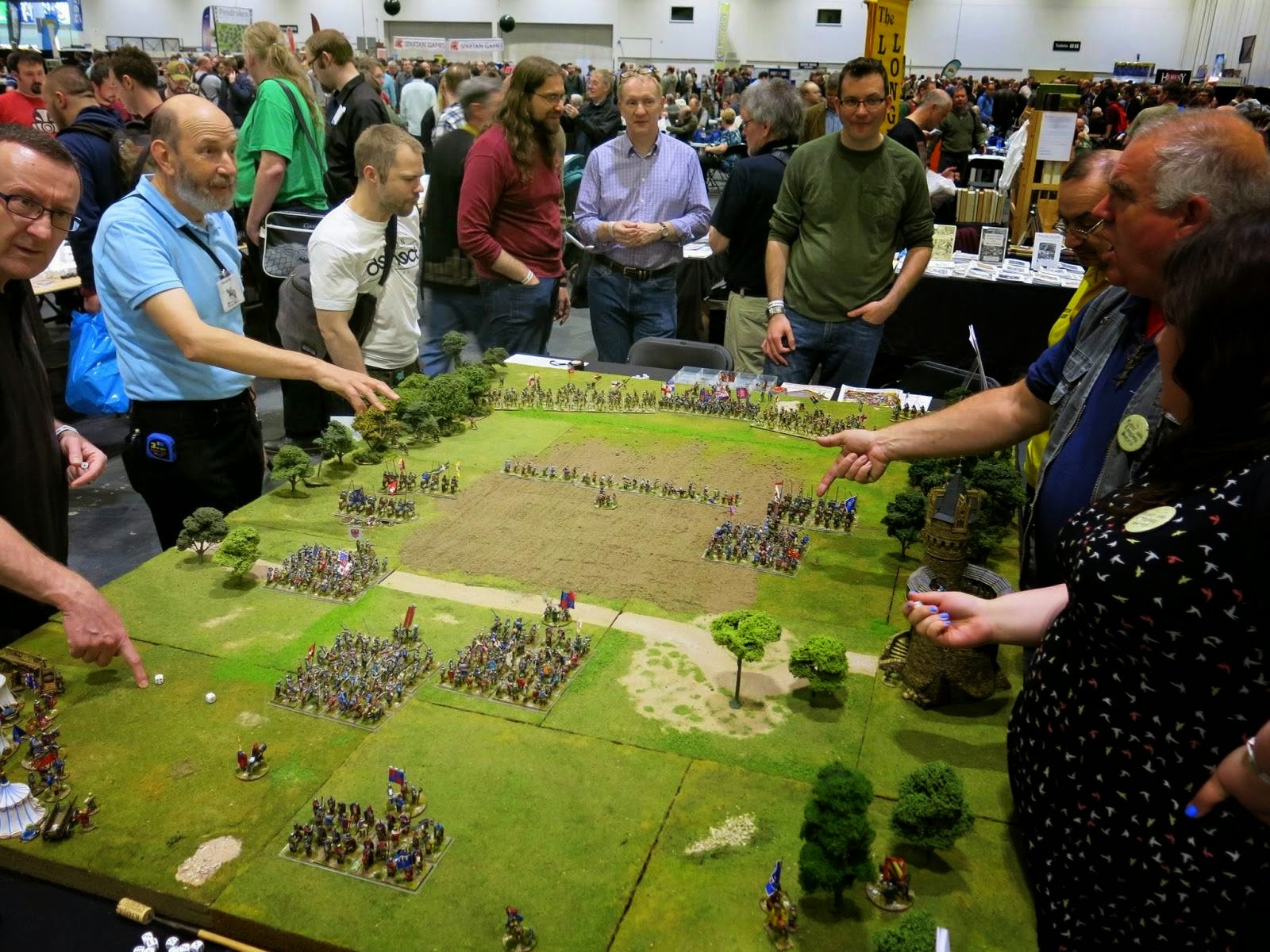 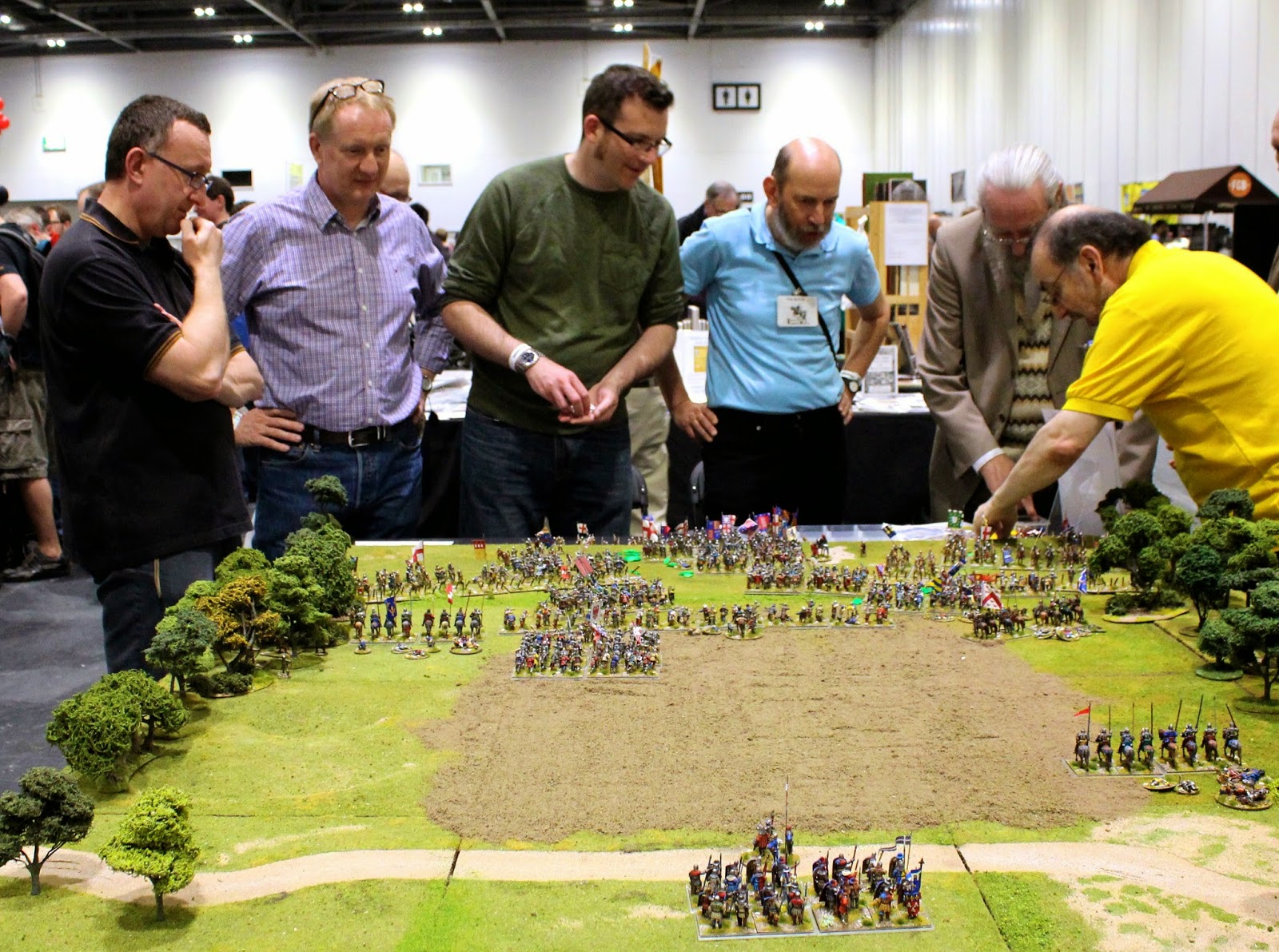 These are a mix of the players in 'hot action' and some close-ups of the figures in action. Most of these are not my pictures; Alan Daniels very kindly sent me several of his very atmospheric close-ups to use (as he did when I put on Cravant game 2 years back) and my daughter Catherine took some too. Both were at the table towards the end of the game, so they show the positions with the French about to rout the English. 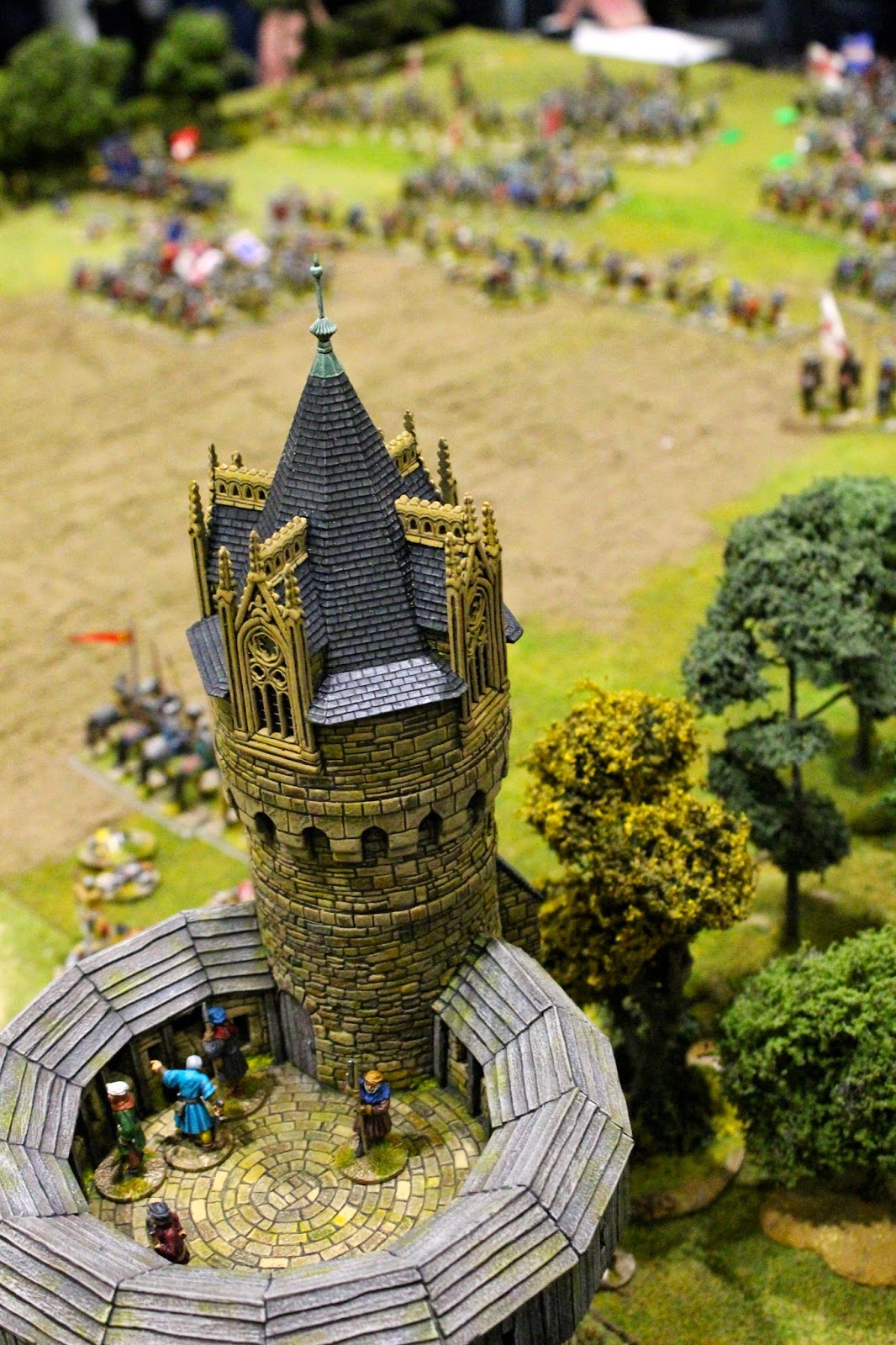 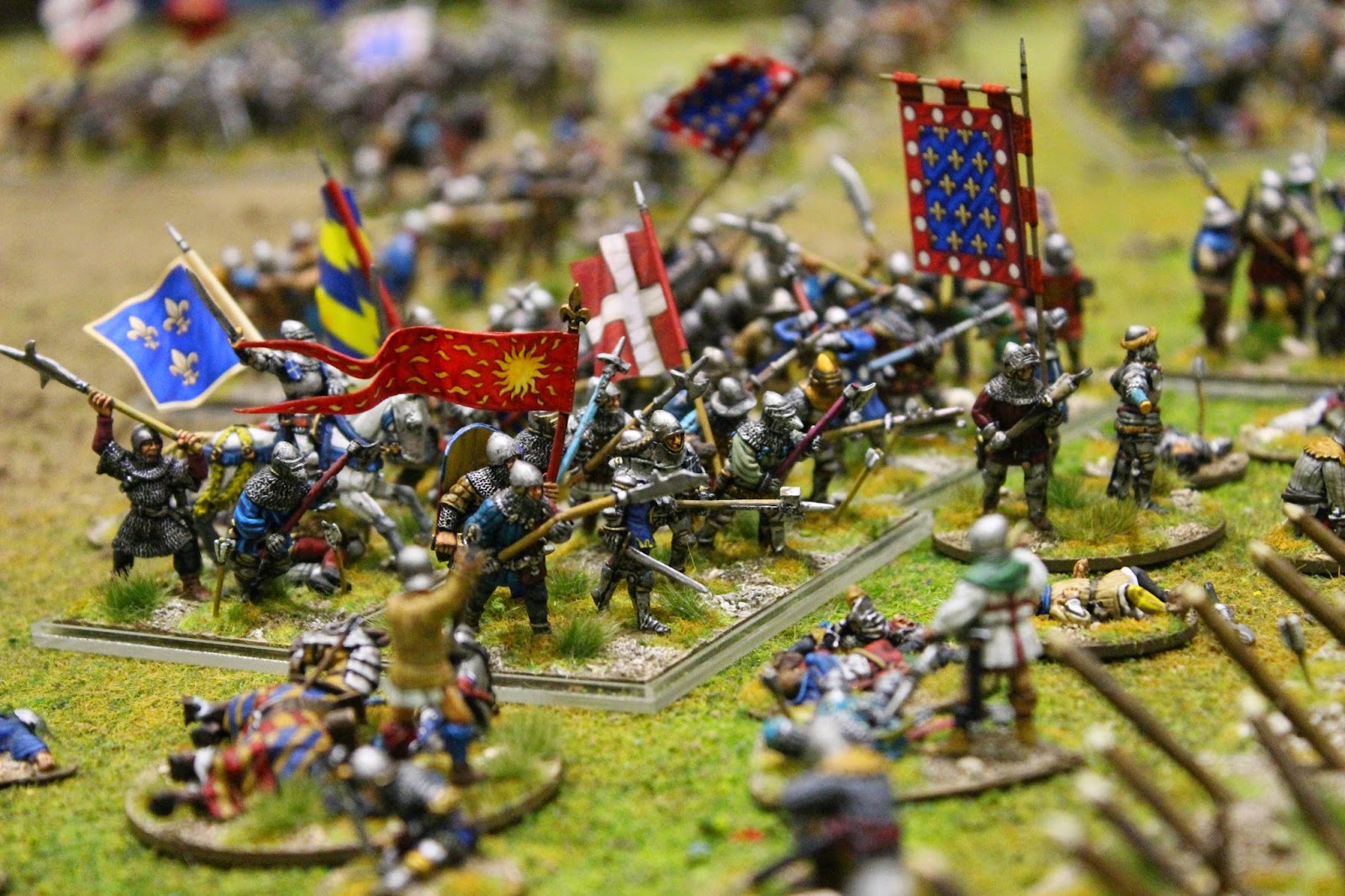 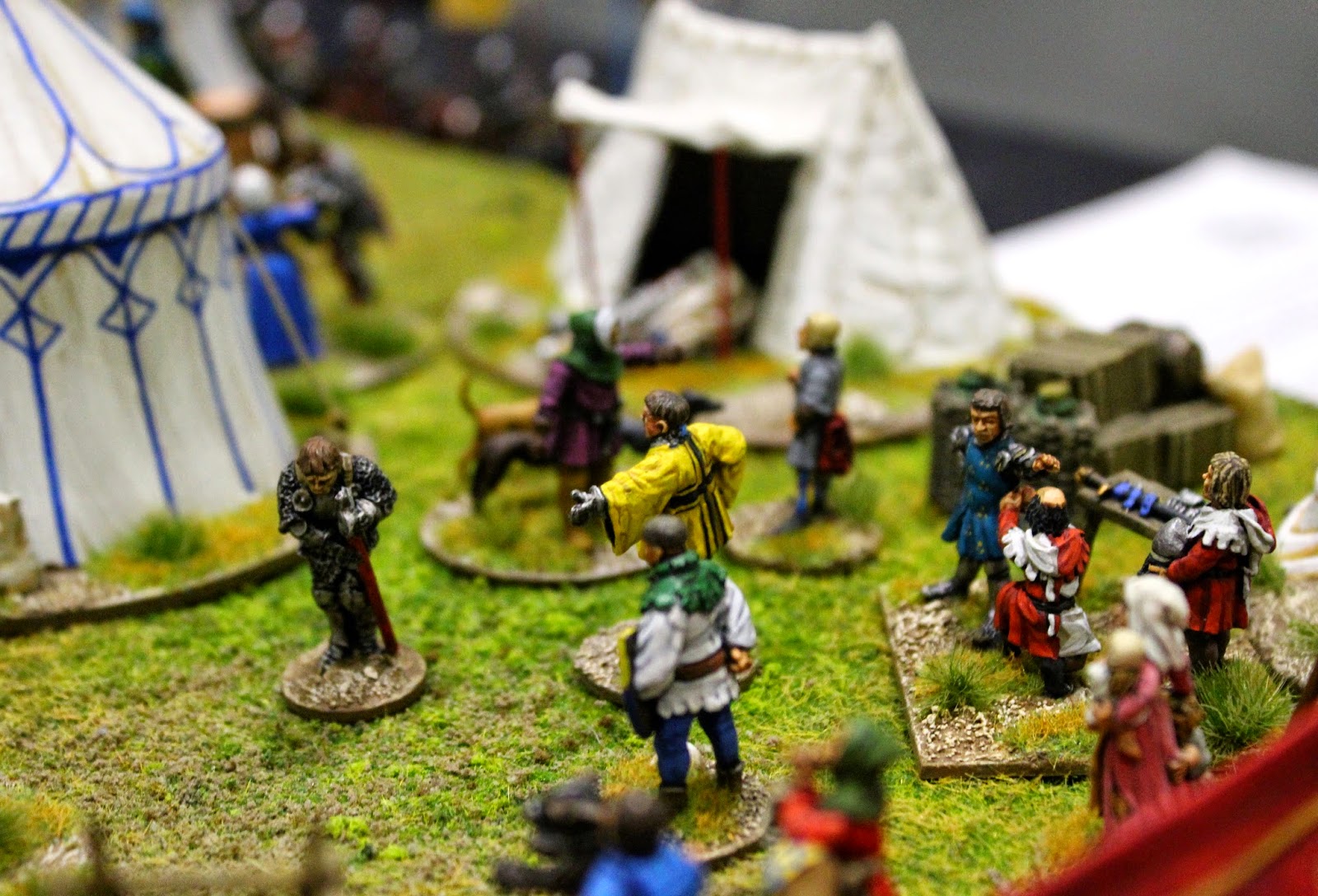 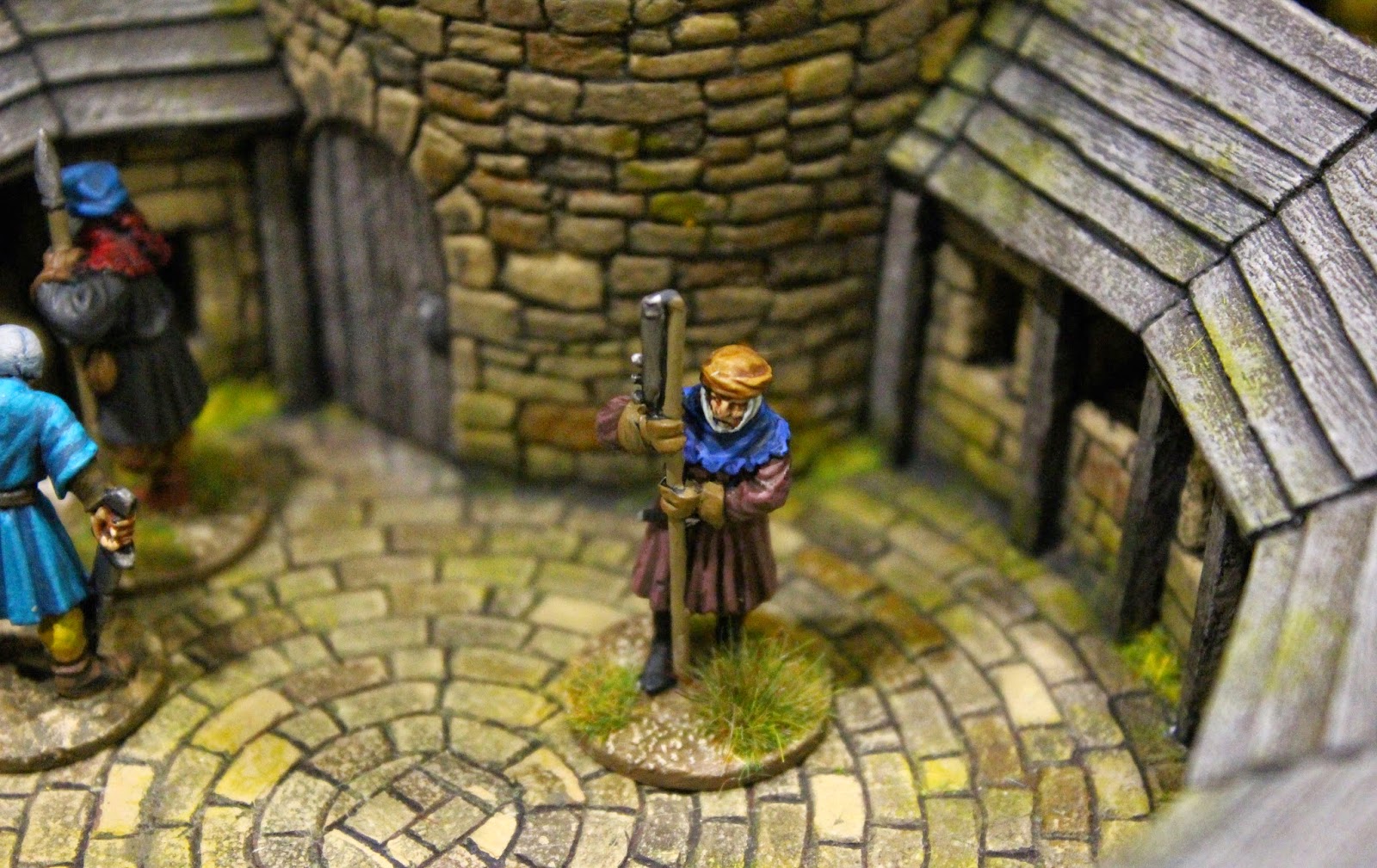 Will McNally was our umpire on the day - he's a more regular gamer than I, with interest in several periods - his blog's here and well worth tagging. Will guided us smoothly through 'Hail Ceaser' and has kindly listed for me below the amends he made to reflect the battle and forces on the day:
Longbow and Crossbow ranges extended to 24" from 18".
Longbows were allowed to fire two ranks deep.
The muddy area effected movement via disorganisation: light troops (Crossbowmen) were disorganised on a d6 roll of 1; heavier infantry on 1 or 2 and cavalry (not used) on 1-3. Disorganisation mean the troops lost their next move.
The effects of the stakes was to remove any charge bonus from the attacker and additionally for the cavalry to disorganise them.Most units were represented by four bases of figures, the only exceptions were the English cavalry as a small unit of two bases and two units of English Men at Arms with six bases who were treated as large units, giving them extra resilience. 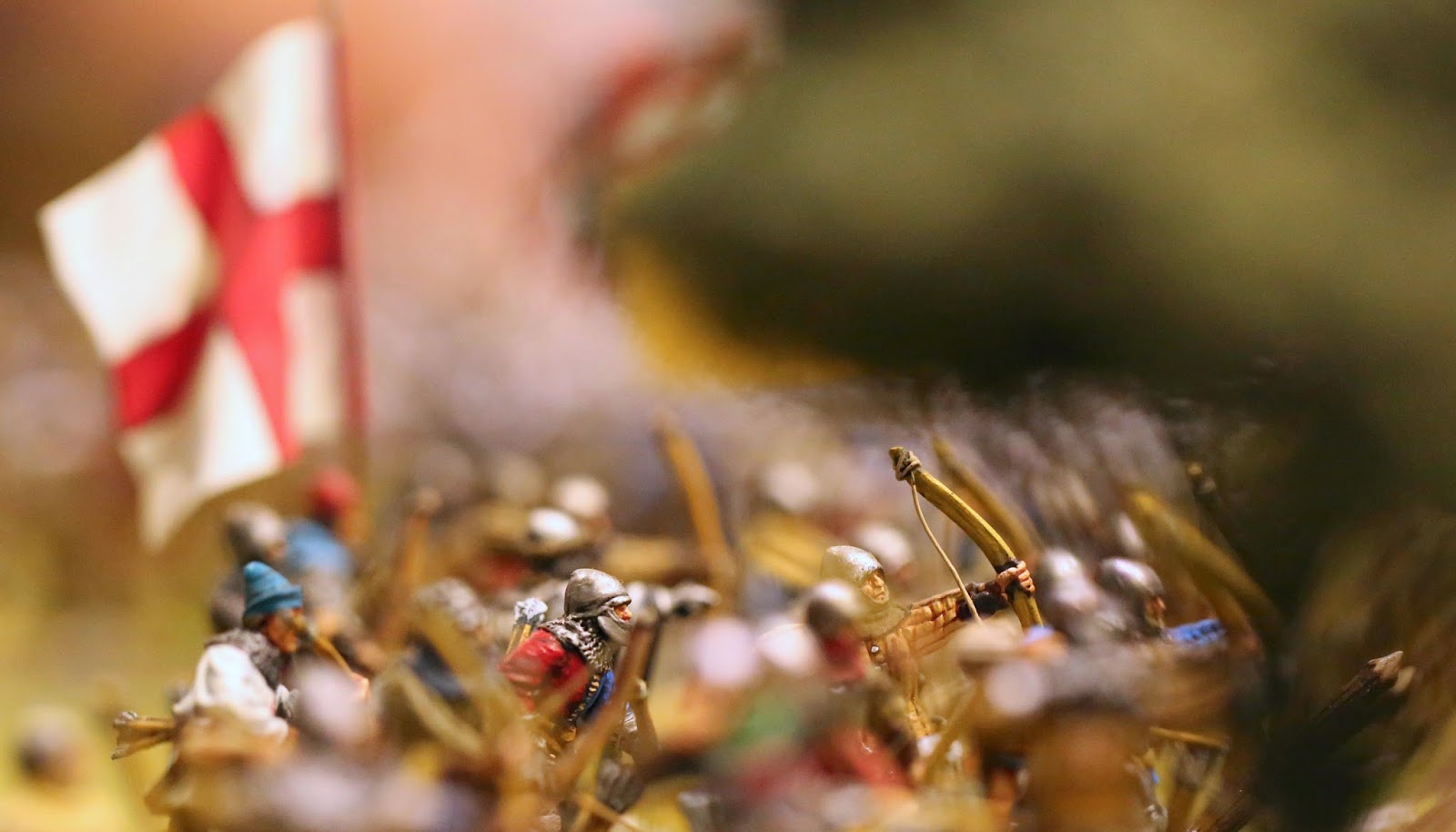 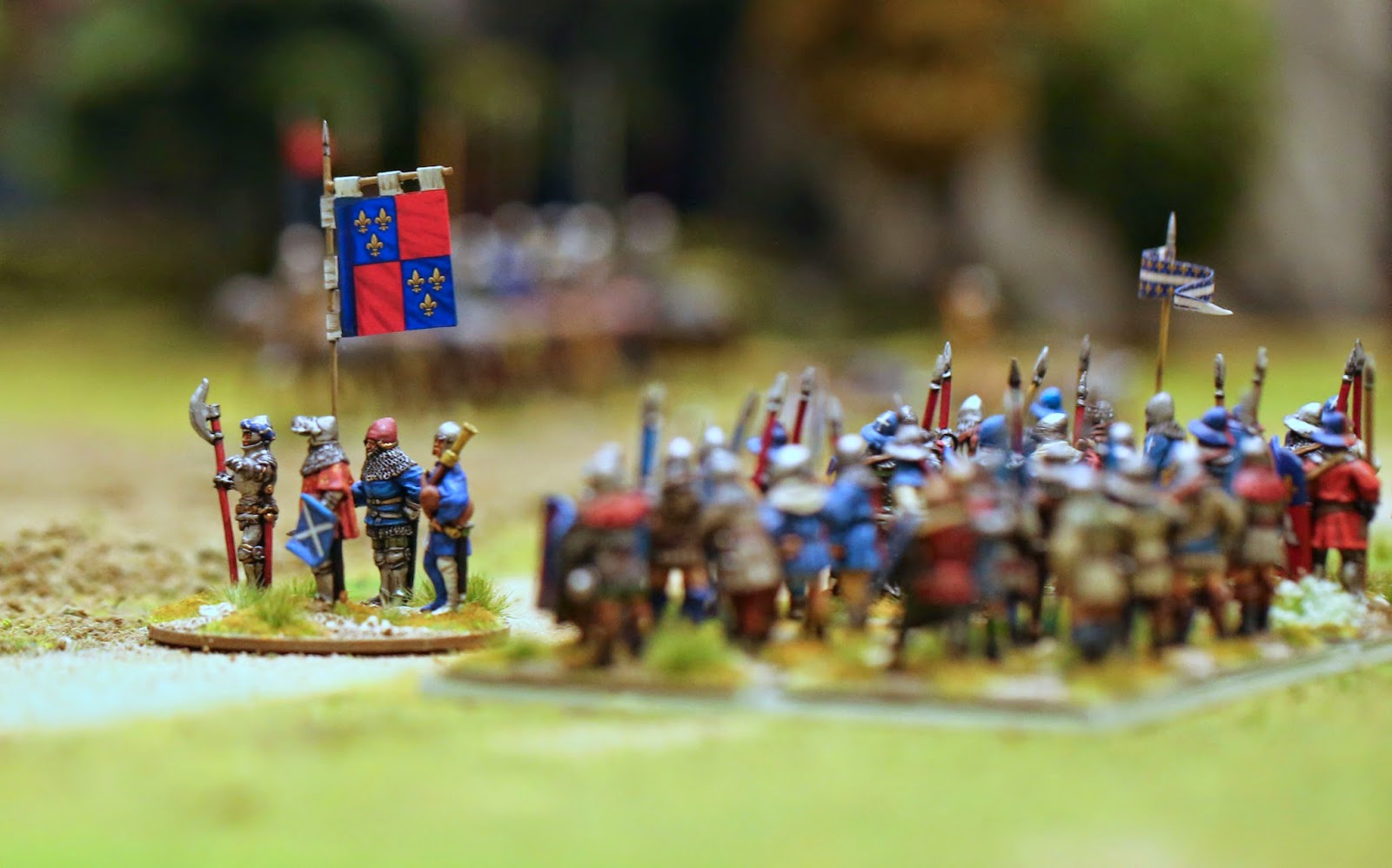 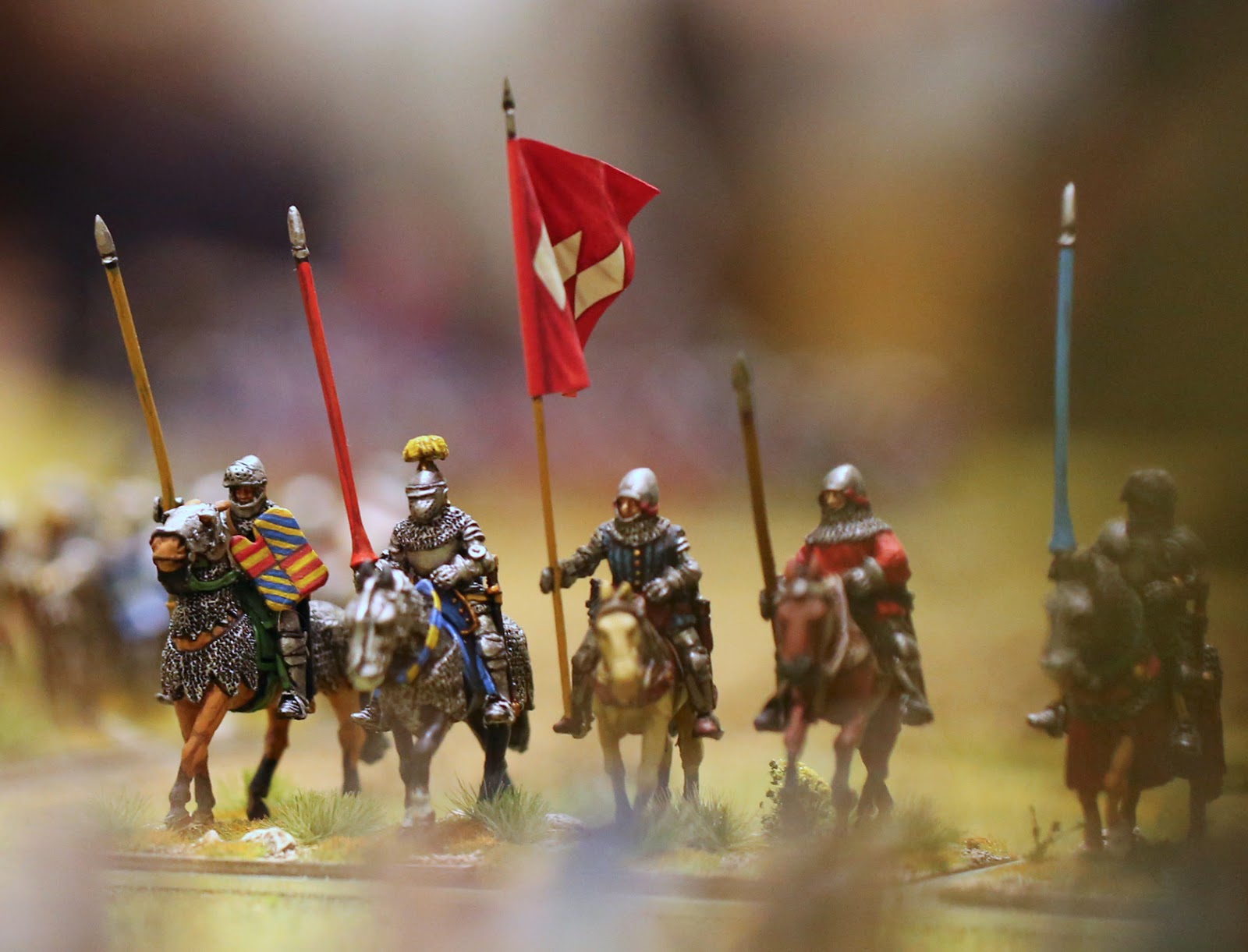 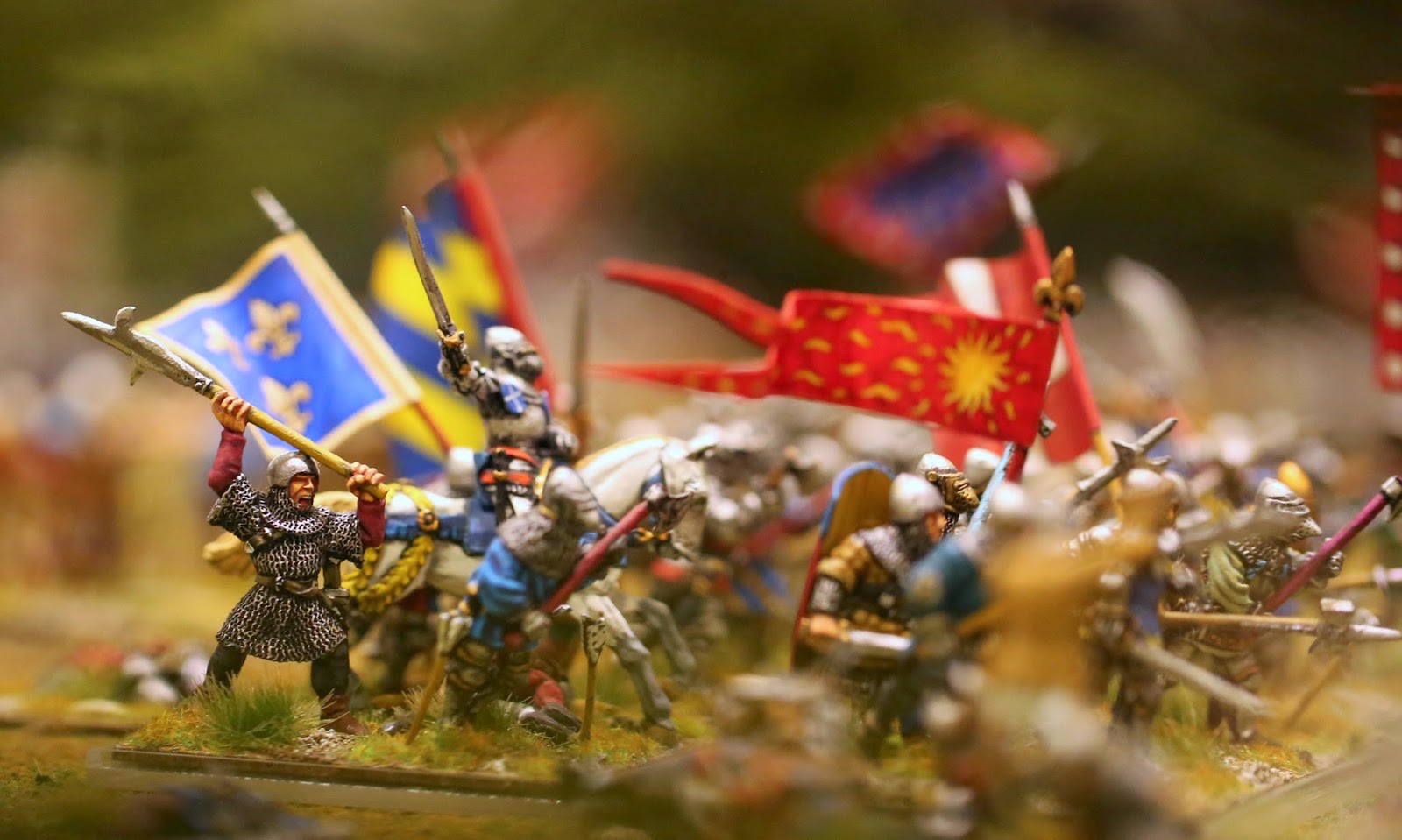 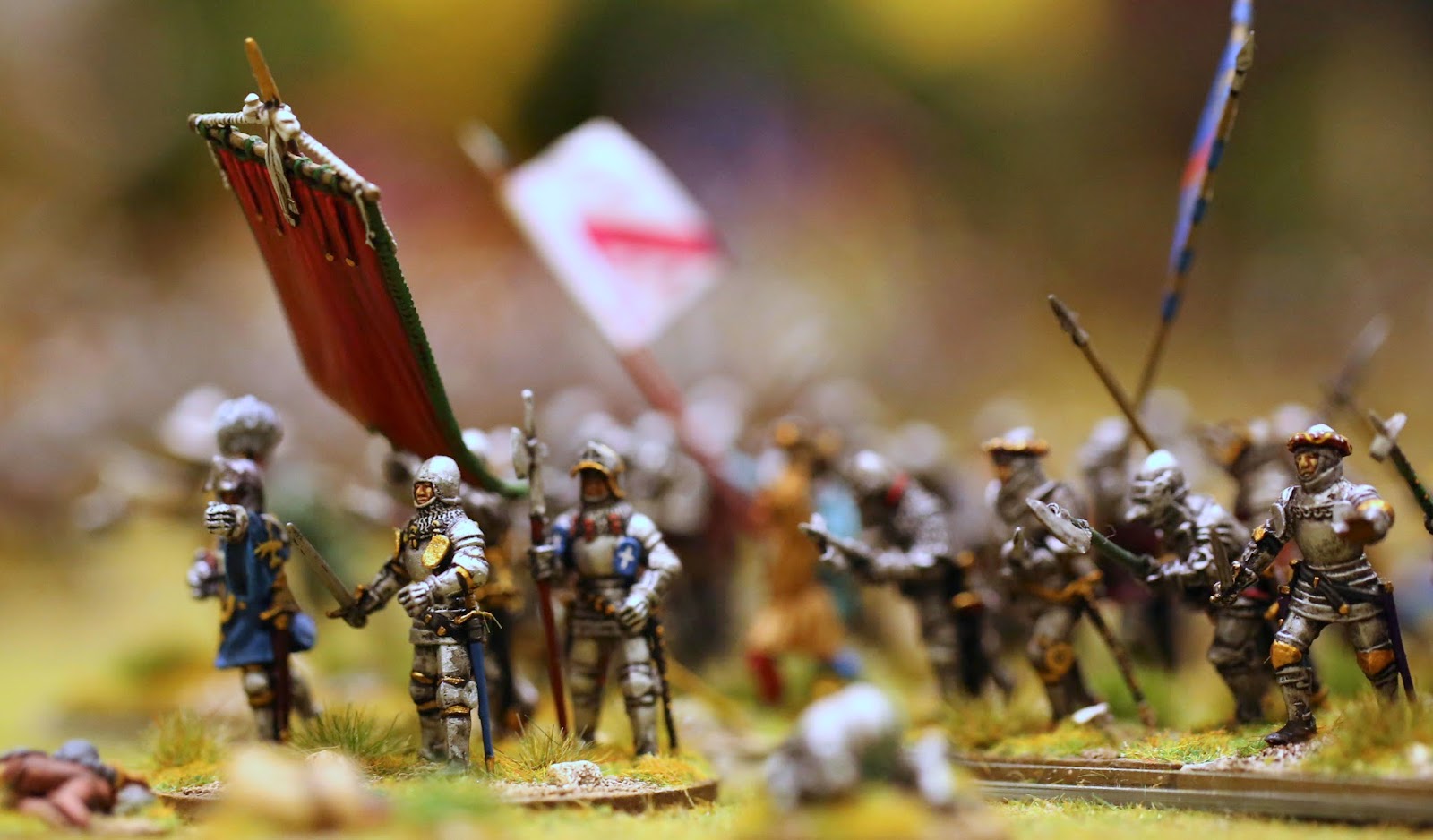 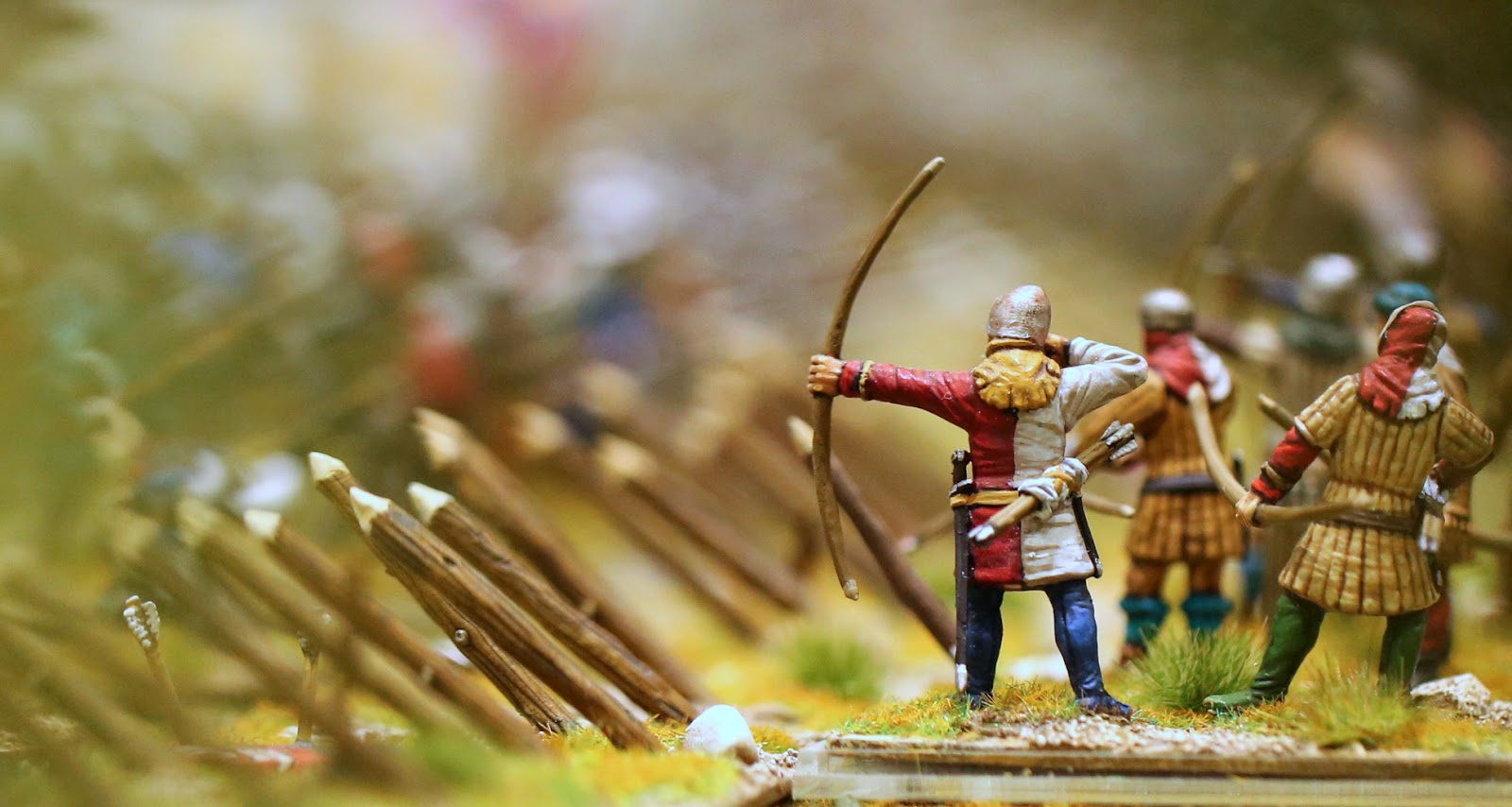 That's probably it for now - a temporary hiatus will ensue but I will return to HYW of course - more wonderful Perry French plastics to come and I have some other items I want to add to the collection.

PS - there are some extra pictures of these figures in the new issue of 'Wargames Soldiers and Strategy' (no 78) - which is HYW themed.  I took these myself and Guy's scattered selected shots over several of the pages. Haven't read the articles yet, but they certainly look interesting. I like the magazine's mix of scenarios, notes on rules and painting/modelling tips.

Gutted I missed this game!!!! Excellent photos though!

Awesome display and magnificent figures too!

It really was an excellent game and richly deserved all the accolades it attracted.

These pics are great too!

Excellent pics of a great day. There was a really good atmosphere round the table, everyone was up for it and happy to chat. It was good engaging with people on history, the hobby or painting or some who were just happy to stand and watch the action unfold

Photo near the end with the "French about to route the English" boo hiss! Obviously no rousing speech by King Harry in this game hmmmm.

Love the photos and would have loved to have played in the game. Well done to all.